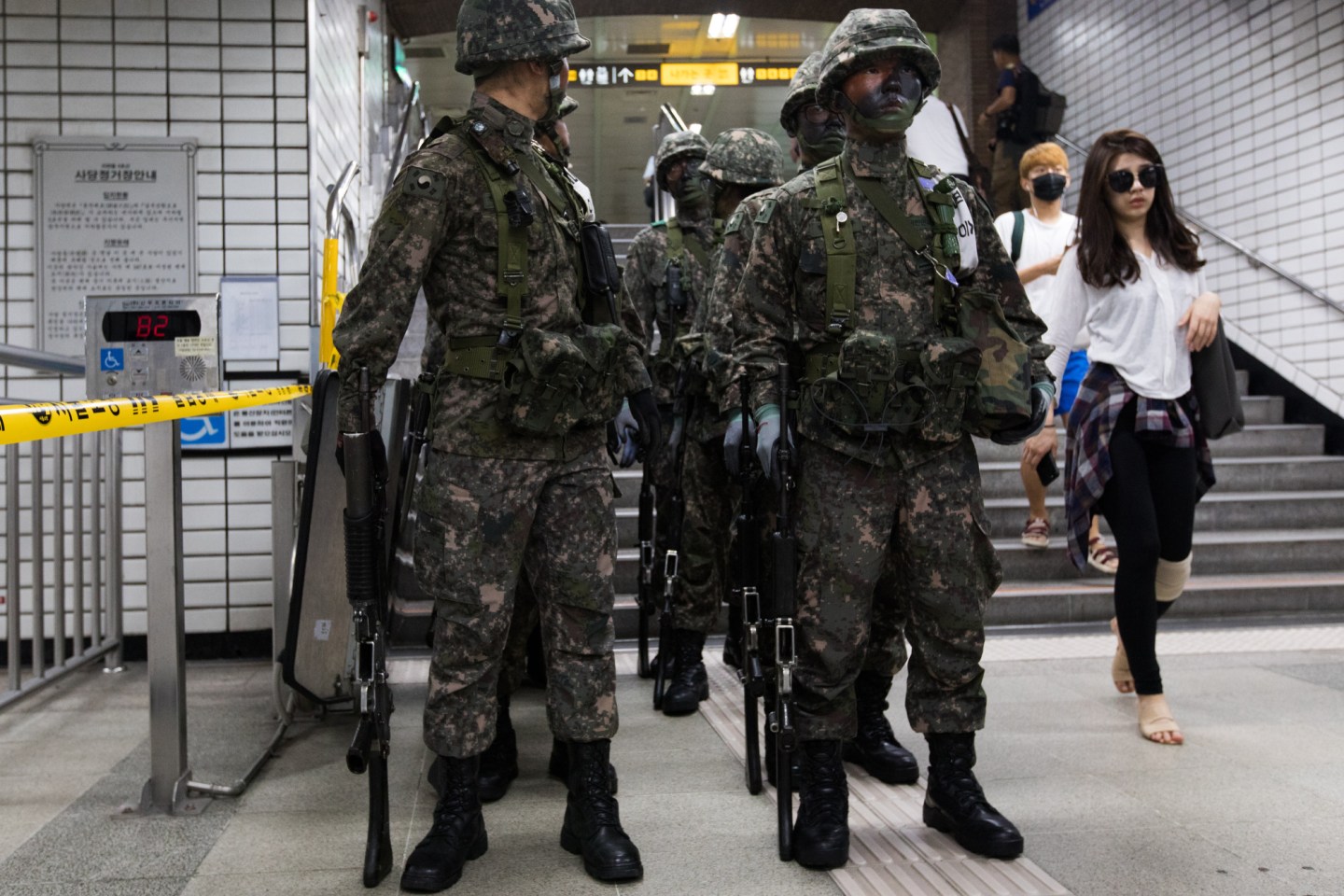 South Korean soldiers at an anti-terror drill on the sidelines of the Ulchi Freedom Guardian (UFG) military exercises at a subway station in Seoul on Aug. 22. Photographer: SeongJoon Cho/Bloomberg
SeongJoon Cho Bloomberg

An initial assessment indicated that two of the missiles failed in flight, while the other appeared to have blown up immediately, U.S. Pacific Command said in a statement. The launches occurred near Kittaeryong in eastern North Korea, with the first fired at 6:49 a.m. local time. Military authorities said they didn’t pose a threat to North America or Guam.

The launches come shortly after Secretary of State Rex Tillerson praised North Korea for showing some restraint and suggested that dialogue could take place soon. While the launch violates United Nations resolutions, short-range rockets are generally seen as less provocative than tests of intercontinental ballistic missiles that could deliver a nuclear device to the continental U.S.

The U.S. and its allies had also warned Kim against following through with a threat to launch missiles toward Guam, home to key American military bases in the Pacific. Japan earlier this month deployed four Patriot missile interceptors into the western part of the country, which would be under the flight path toward the U.S. territory.

North Korea has conducted more than a dozen missile tests this year, including two ICBMS, leading to a war of words earlier this month between U.S. President Donald Trump and Kim’s regime that rattled global markets. Tensions cooled off in recent weeks, with Trump saying Tuesday that Kim was beginning to respect the U.S.

Trump had been informed of the latest tests and “we are monitoring the situation,” White House Press Secretary Sarah Huckabee Sanders said.

Kim’s provocations are a headache for South Korea’s new President Moon Jae-in, who won office in May pledging to engage with the regime to help bring peace to the peninsula. Moon said in a Berlin speech last month that he was willing, under the right circumstances, to meet Kim “ anytime, anywhere.”

North Korea has yet to respond to an offer by Moon to seek a deal by 2020 to bring about the “complete denuclearization” of the isolated nation in return for a peace treaty that would guarantee the survival of Kim’s regime. It has strongly criticized military exercises led by the U.S. and South Korea that run through the end of the month.

Earlier this month, the United Nations Security Council voted unanimously to tighten sanctions on North Korea, targeting about a third of the nation’s roughly $3 billion in exports. Kim’s regime has said it won’t give up its nuclear weapons and missile program until the U.S. drops its “hostile” policies.