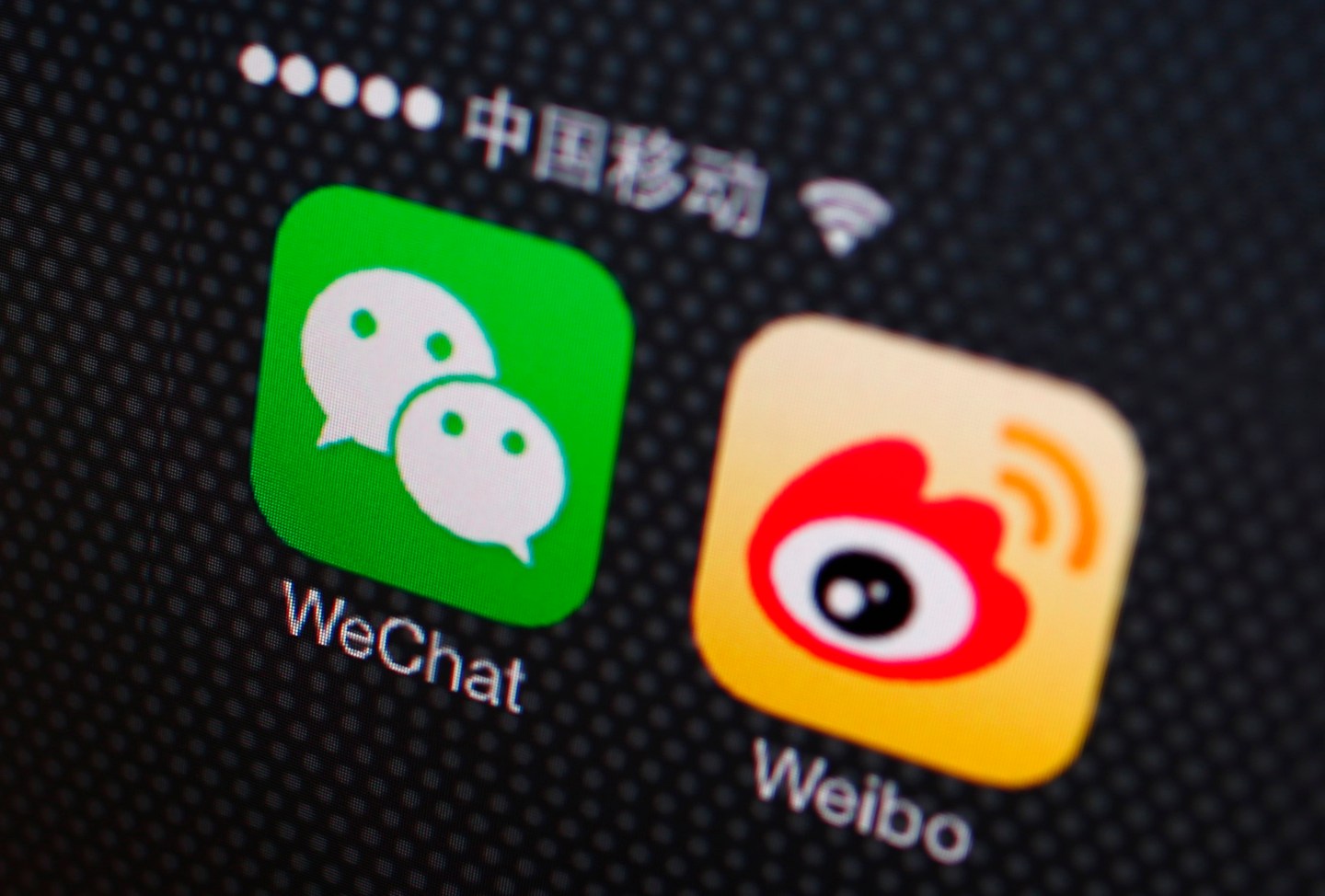 A picture illustration shows icons of WeChat and Weibo app in Beijing, December 5, 2013. An unprecedented Nov. 14 leak of China's Communist Party reform plans fuelled China's biggest stock market rally in two months as it spread on microblogs and passed from smartphone to smartphone on WeChat, a three-year-old social messaging app developed by Tencent Holdings Ltd. WeChat, or Weixin in Chinese, meaning "micromessage", leapt from 121 million global monthly active users at the end of September 2012 to 272 million in just a year. It has quickly become the news source of choice for savvy mobile users in China, where a small army of censors scrub the country's Internet of politically sensitive news and "harmful" speech. Unlike popular microblogging services such as Sina Corp's Sina Weibo, where messages can reach millions of people in minutes, WeChat allows users to communicate in small, private circles of friends, and send text and voice messages for free - a big part of its success. Weibo has been particularly singled-out in the ongoing crackdown on "rumour-mongering" by China's stability-obsessed government, which views public protest as a threat to its authority. But WeChat has not escaped the government's attention, and its explosive growth means it is attracting more scrutiny than ever from the authorities. The Chinese characters above reads "China Mobile". Picture taken December 5, 2013. REUTERS/Petar Kujundzic (CHINA - Tags: POLITICS BUSINESS TELECOMS) - RTX16EHL
Petar Kudjundzic—Reuters

China’s cyber regulator on Friday said it was investigating the country’s top social media sites over failing to comply with strict laws that ban content which is violent, obscene or deemed offensive to the Communist Party.

The companies did not immediately respond to emails and phone calls seeking comment on the probe.

This is the latest in a series of regulatory actions against the country’s top tech firms as China’s cyber authorities adopt an increasingly hardened stance on censorship, doling out harsh punishments to firms that fail to comply.

Cyber surveillance is being tightened further ahead of the 19th National Congress of the Communist Party of China expected to be held later this year, when global attention will be on news coming from the world’s second-biggest economy.

Last month, cyber authorities called on the same firms to carry out immediate “cleaning and rectification” at a meeting with their representatives, where the authorities cited specific examples of illicit content, including rumors about party officials and misrepresenting Chinese military history.

Prior to the meeting, Weibo was ordered to partially close its video site over violations, wiping out a combined $1.3 billion worth of stock between Weibo and parent firm Sina Corp .

Messaging app WeChat and microblogging service Weibo are China’s most popular social media platforms, and have thrived due to the absence of western competitors like Facebook and Twitter that are banned by the country’s censors.

WeChat and Weibo have about 940 million and 350 million monthly active users, respectively.