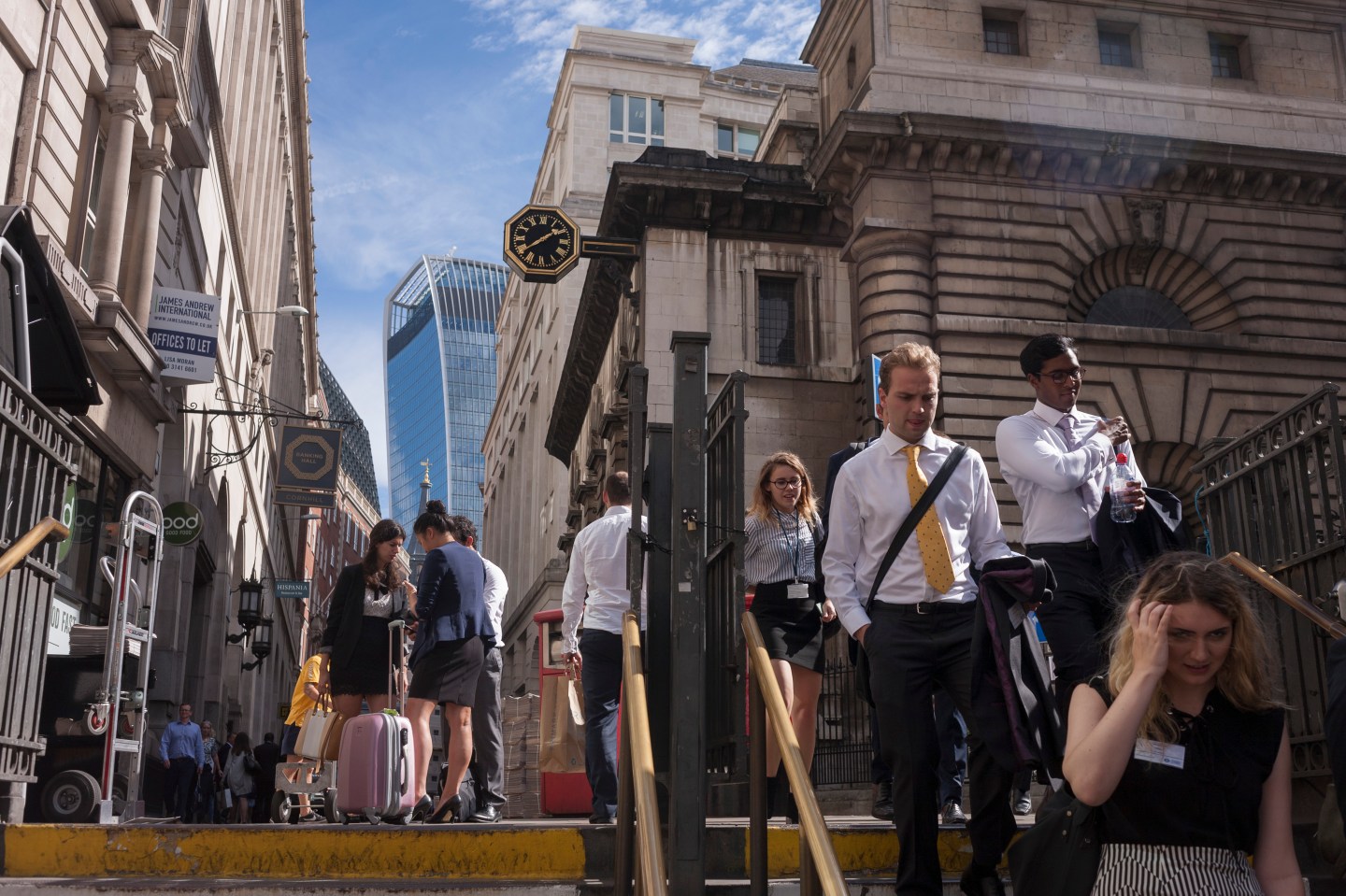 Commuters and lunchtime pedestrians enter Bank Underground station on the corner of Lombard and King William Streets on 12th September, in the capital's financial district, the City of London, UK. (Photo by Richard Baker / In Pictures via Getty Images)
Richard Baker—Getty Images

Britain’s finance industry could lose up to 40,000 investment banking jobs in the next few years unless it strikes a softer deal on its departure from the European Union, according to a new report by consultancy firm Oliver Wyman.

Banks are currently planning for a worst-case scenario in which they lose access to the European single market once Britain leaves the bloc in 2019, as they say they do not have time to wait to see how Britain’s talks with Brussels unfold.

Citigroup (C), Bank of America and Morgan Stanley as well as Britain’s Barclays (BCS) have all indicated in the last month they are finalizing plans to set up subsidiaries within the EU.

“The banks are working on ‘no regrets’ moves, which increase options but don’t cost that much either to undertake or to reverse,” Matt Austen, U.K. head of financial services at Oliver Wyman, said.

“Once you get to the point of putting balance sheet and capital into an entity, it becomes more committed. The economics really start to bite when banks start to deploy financial resources.”

These initial moves could see around 12,000 to 17,000 banking jobs move out of London but with a number of issues, including around clearing, still to be hammered out, that number could more than double to 40,000, the consultancy estimated.

The wholesale banking sector, which includes sales and trading and investment banking, employs around 80,000 people in Britain, according to Oliver Wyman, so based on that figure about half of these jobs could move.

Oliver Wyman had warned in October in a report commissioned by the industry’s main lobby group TheCityUK that 75,000 jobs may disappear from Britain if finance firms, including insurers and asset managers, lost the right to sell their services freely across Europe, costing the government up to 10 billion pounds in lost tax revenue.

But for now banks are holding off on implementing plans to move a significant number of people, focusing instead on ensuring they have the right legal and operational framework to do business in the EU if Britain fails to negotiate a favorable exit deal, banking executives say.

“Most are looking to minimize expense and disruption by relocating as little as possible in the first instance,” Oliver Wyman said.

The largest global banks in London have so far indicated about 9,600 jobs could go to the continent in the next two years, according to public statements and information from industry sources.

“If you want to move people in advance of March 2019, realistically, the latest you can afford to wait is next summer, maybe even sooner,” Austen said.

The consultancy also estimated that $30 to $50 billion of extra capital might be needed to support new European entities, equivalent to 15 to 30% of the capital currently committed to the region by wholesale banks, which could knock 2% off their returns on equity.

“There is a risk that banks’ capital needs could be higher still, for example if they fail to achieve sought-after regulatory treatment (from European Union regulators) on issues such as internal model approvals and the treatment of large inter-company exposures.”

The bill for duplication of services as they build up new European entities in areas such as risk and compliance could add between 2 and 4% to the annual cost base or around $1 billion.

“Given that returns on equity in European wholesale banking are already below hurdle for many players, these new challenges from Brexit will raise difficult questions about the viability of some activities over the medium term,” the consultancy said.

“Some banks may even choose to withdraw capacity from the European market as a whole and redeploy to other regions, such as Asia or the US.”