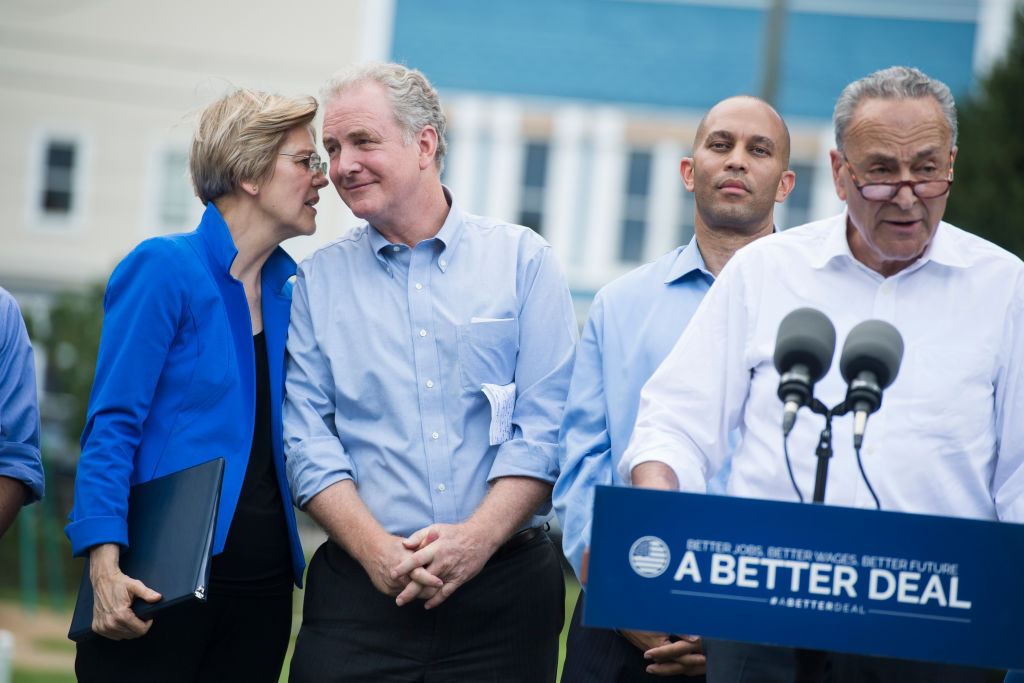 Promising “A Better Deal” for American workers, Democratic Party leaders rolled out a new agenda with a populist pitch on Monday aimed at winning back the working-class voters they lost to President Donald Trump in November.

Democratic congressional leaders left the Beltway for small-town Berryville, Virginia, to stake a claim to competing in rural and Republican-leaning areas. Acknowledging they failed to offer a compelling economic message during the 2016 election cycle, Democrats unveiled proposals on jobs, prescription drug prices and more that they hope will resonate in the 2018 midterm elections and beyond.

“Too many Americans don’t know what we stand for,” said Senate Minority Leader Chuck Schumer of New York. “Not after today.”

Yet the challenges confronting the Democrats’ rebranding effort were immediately apparent.

As Schumer spoke alongside other House and Senate Democrats, TV news stations were instead showing Trump adviser Jared Kushner denying collusion with Russia, as Trump administration turmoil swamped Democrats’ attempt to get their message out.

And the Democrats’ new message was presented by some familiar old faces in Schumer and House Minority Leader Nancy Pelosi, whose potency as a GOP foil has been on display in House special elections this year. A small group of protesters hoisted pizza boxes with photos of Pelosi and the words “Better skills, Better jobs, Better wages, Still Pelosi.”

The phrase played off the full title of the Democratic platform — “A Better Deal: Better Jobs, Better Wages, Better Future” — which some have mockingly compared to the Papa John’s pizza slogan, “Better Ingredients, Better Pizza.”

Alluding to Schumer and Pelosi, one local Democrat in attendance, David Borger, said: “I have a lot of respect for both of them, but I’m not sure they are the leadership we need.”

“There might have to be new leadership,” added Borger, 62, a retired middle school science teacher, while acknowledging it was not clear who that might be.

And despite Democrats’ claims of unity, and a base energized against Trump, divisions aplenty remain in a party still nursing the wounds of defeat as some of the liberals who backed Vermont Sen. Bernie Sanders still resent those who supported Hillary Clinton.

For more on the Democratic agenda, watch Fortune’s video:

Nevertheless, as the sun beat down Monday and bugs swarmed in a local park, Democratic leaders claimed a positive agenda to take them out of their minority status.

Attempting to showcase all wings of the party, moderate Sen. Mark Warner of Virginia spoke as did liberal Sen. Elizabeth Warren of Massachusetts. Warren was mobbed afterward by supporters.

The event took place in the district of one of the GOP House members Democrats hope to defeat next year, Barbara Comstock. Democrats need to flip 24 GOP-held seats to regain the majority in the House.

Yet in the Senate, the party is mostly playing defense with 10 Democrats trying to retain seats in states won by Trump, including Republican strongholds like West Virginia, Missouri and North Dakota. Party strategists say that for most Senate candidates, a national party message has little value and each candidate must fight on their own terms and issues.

On Monday Democrats unveiled three planks to their agenda: