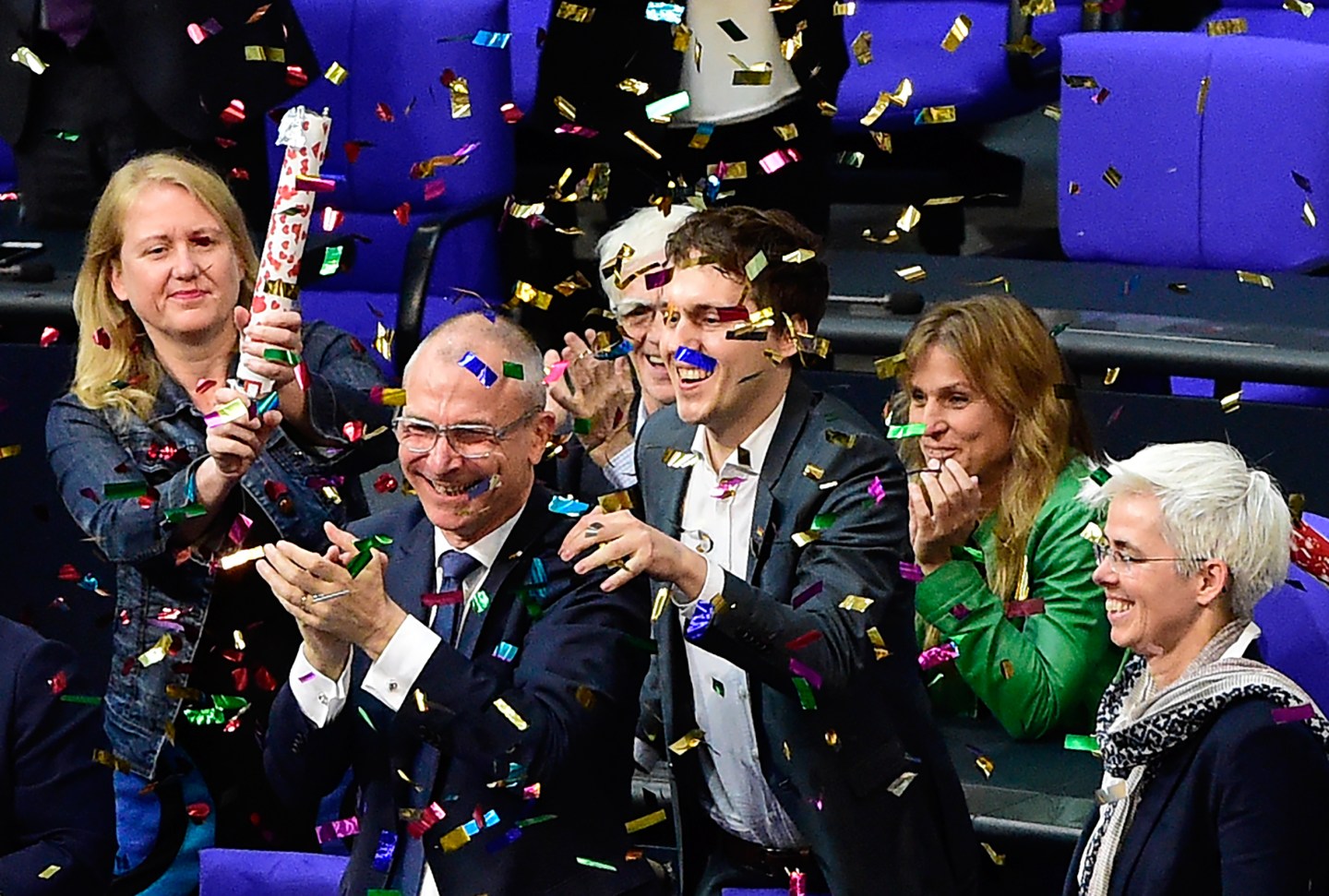 MP of the Greens Volker Beck (2nd L) stands in a confetti rain as he celebrates with party colleagues after a decision at the Bundestag (lower house of parliament) in Berlin on June 30, 2017. The German parliament legalised same-sex marriage, days after Chancellor Angela Merkel said she would allow her conservative lawmakers to follow their conscience in the vote. / AFP PHOTO / Tobias SCHWARZ (Photo credit should read TOBIAS SCHWARZ/AFP/Getty Images)
TOBIAS SCHWARZ AFP/Getty Images

Germany’s parliament voted by a wide margin on Friday to legalise same-sex marriage, after Chancellor Angela Merkel did an about-face that freed members of her ruling conservative bloc to follow their personal conscience rather than the party line.

Merkel, who will seek a fourth term in a national election on Sept. 24, told reporters after the landmark decision that she had voted against the measure because she believed that marriage as defined under German law was between a man and a woman.

But she said her decision was a personal one, adding that she had become convinced in recent years that same-sex couples should be allowed to adopt children.

“I hope that the vote today not only promotes respect between (those of) different opinions but also brings more social cohesion and peace,” Merkel said.

Read: Germany’s New Law Is a Milestone for Social Media Regulation in Europe

The parliament voted by 393 votes in favour of same-sex marriage to 226 against.

Many other European countries, including France, Britain and Spain, have already legalised same-sex marriage. However, many others, including Italy, Austria and Poland, all either ban or restrict it. The decision of Germany, Europe’s largest and most influential country, to legalize may put pressure on more conservative hold-outs to fall into line.

Merkel’s announcement on Monday that she would allow lawmakers to vote on same-sex marriage according to their individual conscience drew the ire of some in her traditionally Catholic conservative bloc.

But political analysts say the issue will likely have faded from voters’ minds by the time the September election comes around.

Read: ChargePoint Plugs in to Siemens to Bolster Europe Growth

Friday’s vote marks a rare victory for Merkel’s Social Democrat (SPD) coalition partners, who are trailing the conservatives in opinion polls. They had seized on Merkel’s surprise comments on Monday to say they would push for an early vote before parliament’s summer recess.

Success in passing the so-called “marriage for all” amendment could provide a sorely needed boost for the center-left SPD, which has seen a short-lived boost in the polls earlier this year evaporate in recent months. However, it could also deprive them of a clear vote-winner, with Merkel’s change of mind drawing the sting from the issue. Recent polls had suggested that around 75% of Germans were in favor, making the CDU’s position very much a minority one.

The measure will likely be signed into law by the president some time after July 7.