Lawyers Rally to Save ‘McMansion Hell’ from Zillow’s Copyright Claim 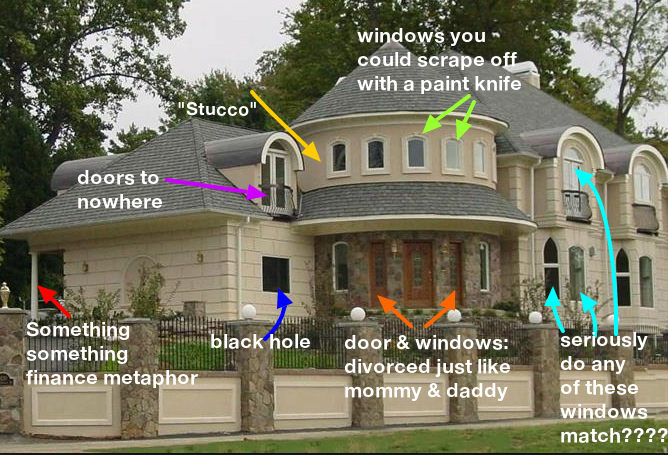 Fans of the website McMansion Hell enjoy it as a way to laugh at garish, overbuilt homes. As you can see from the picture above, the site takes delight in poking fun at house touches like “windows you could scrape off with a butter knife” and “doors to nowhere.”

But real estate firm Zillow does not like such jokes and threatened the site owner, a John Hopkins architecture student named Kate Wagner, with a series of questionable legal claims. According to Zillow, Wagner is violating not just copyright and terms-of-service rules, but also a federal hacking statute.

In response to Zillow’s cease-and-desist letter—which was posted online by Ars Technica—Wagner has taken the site down. On Twitter, she has described herself as “terrified” and said she fears losing her income.

this blog is my entire livelihood, if it goes, I lose absolutely everything. https://t.co/Px1cUbULVo

Fortunately for Wagner, Zillow’s legal threats appear to be baseless. For starters, the company does not even own the copyright to the pictures of the houses. And, in any case, Wagner’s mock-up of them are almost certainly covered by a legal doctrine known as “fair use,” which lets people use copyrighted works without permission for things like reporting, criticism and parody.

It’s also unlikely Zillow can enforce its contractual terms-of-service against Wagner or apply the hacking law—known as the Computer Fraud and Abuse Act—which is intended to cover fraud or vandalism.

In response to the controversy, lawyers have expressed incredulity, and a prominent copyright professor has already offered to come to Wagner’s aid:

having @rtushnet say "email me" is basically the best thing that can happen in this situation.

Meanwhile, the whole episode is threatening to become a PR debacle for Zillow on social media:

Dear @zillow: your PR dept is not going to be very fond of your legal dept. *You're* doing more damage to your brand than @mcmansionhell

The McMansion Hell controversy is likely to end with Wagner’s site going back online, and with Zillow becoming the latest victim of what is known as “the Streisand effect“—a phenomenon in which an attempt to use dubious legal tactics to smother an issue on the Internet results in even more publicity for that issue. (Ironically, the original Streisand effect case—named for Barbara Streisand—also turned on mansions).

Update: On Thursday afternoon, the site confirmed it is back online. A spokesperson for Zillow provided the following statement:

“It was never our intent for McMansion Hell to shut down, or for this to appear as an attack on Kate’s freedom of expression. We acted out of an abundance of caution to protect our partners – the agents and brokers who entrust us to display photos of their clients’ homes.”