Brazil Defends Beef After U.S. Bans It Over Abscesses and Inspection Failure 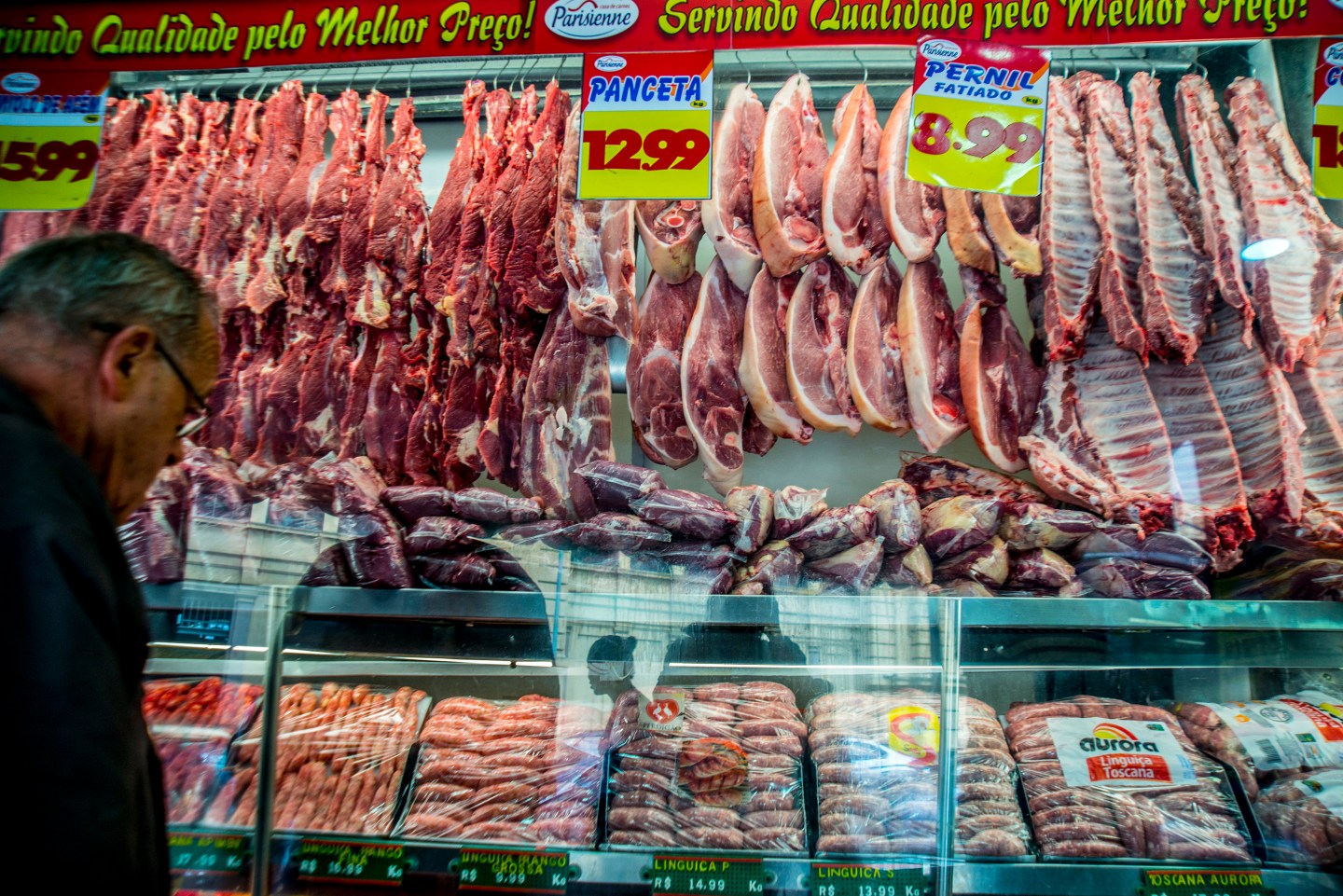 SAO PAULO, BRAZIL - MARCH 20: A shopper browses for meat at a public market on March 20, 2017 in Sao Paulo, Brazil. Brazilian Federal Police launched a major operation in several Brazilian states with search and arrest warrants for directors of the country's main meat-producing companies, such as JBS and BRF. Thirty-three employees of the Ministry of Agriculture were removed from office for alleged involvement in a corruption scheme and receiving a bribe for allowing spoiled meat to circulate in Brazilian supermarkets. (Photo by Cris Faga/LatinContent/Getty Images)
Cris Faga—CON LatinContent/Getty Images

Brazil scrambled to shore up its beef industry’s reputation on Friday after the United States blocked shipments of fresh cuts, saying it found abscesses in the meat and signs of systemic failure of inspections in the world’s largest beef exporter.

Officials in Canada and the European Union also said they had rejected some shipments ofBrazilian beef in recent months. Brazil‘s government and meat industry said most problems stemmed from vaccinations and were being addressed.

While fresh beef shipments to the United States represent only 1 percent Brazil‘s beef exports, the ban there and scrutiny elsewhere threatens to tarnish the country’s powerhouse protein industry, which has suffered a series of recent scandals.

“If you look at the financial aspect, it’s important for the country but the bigger damage is to our image,” said Antonio Camardelli, head of Brazilian meat exporters association Abiec. He said USDA approval for Brazil‘s fresh beef, which was only granted last year, was expected to open the door to bigger fresh beef importers such as Japan and South Korea.

“We worked a long time to open the U.S. market because it’s a passport to other markets,” Camardelli said.

Brazil Deputy Agriculture Minister Eumar Novacki said the problems laid out by the USDA posed no risk to public health. Novacki told reporters at a news conference that some cattle had adverse reactions to certain vaccines.

Among the violations the USDA detected were abscesses, unidentified foreign material and “ingesta,” which can include any food, drink or medicine that cattle consume.

Brazilian beef exports to the United States from companies including Marfrig Global Foods SA and Minerva SA also have been missing shipping marks and had labeling problems on containers, according to USDA data.

Novacki recognized there were flaws in Brazil‘s inspection system but suggested there could be “commercial motivations” for the U.S. ban. He said U.S. and European authorities had stepped up inspections of Brazilian beef in recent months.

Since March, the USDA has rejected 11 percent of Brazilian fresh beef products, compared to the rejection rate of 1 percent for shipments from the rest of the world. The shipments, totaling about 1.9 million pounds, raised concerns about public health, animal health and sanitation, the USDA said.

Camardelli said about 120 containers with some 3,000 tonnes of Brazilian meat currently are at sea headed to the United States.

The EU said it had rejected some shipments of Brazilian beef due to the presence of Shiga toxin-producing E. coli. Some Brazilian poultry shipments were refused because of salmonella.

Canada has rejected six shipments of Brazilian beef out of 191 meat shipments since April 10, according to the Canadian Food Inspection Agency.

The Canadian agency said it recently blocked imports from one JBS SA plant in Brazil that did not meet food safety requirements, but is accepting meat from plants that meet its standards.

Novacki said Brazil was working with European officials to allay concerns and declined to comment on issues in Canada.

The problems, detailed by representatives in response to questions by Reuters, illustrate thatBrazil meat industry is still under a cloud of scrutiny.

Three months ago, Brazilian meatpackers were hit with a scandal involving alleged bribery of health officials, which briefly shut Brazil‘s protein exports out of major global markets from China to Europe.

Shares of JBS and Marfrig fell about 1 percent in Sao Paulo.

Marfrig said beef exports from Brazil to the U.S. market have contributed less than 1 percent of its revenue this year.

Minerva, whose shares were up slightly, said it would ship fresh beef to the U.S. market from Uruguay rather than Brazil, adding that the change would not affect its export volumes.