Apple iPad Pro vs. Microsoft Surface Pro: Which Tablet Is Right For You? 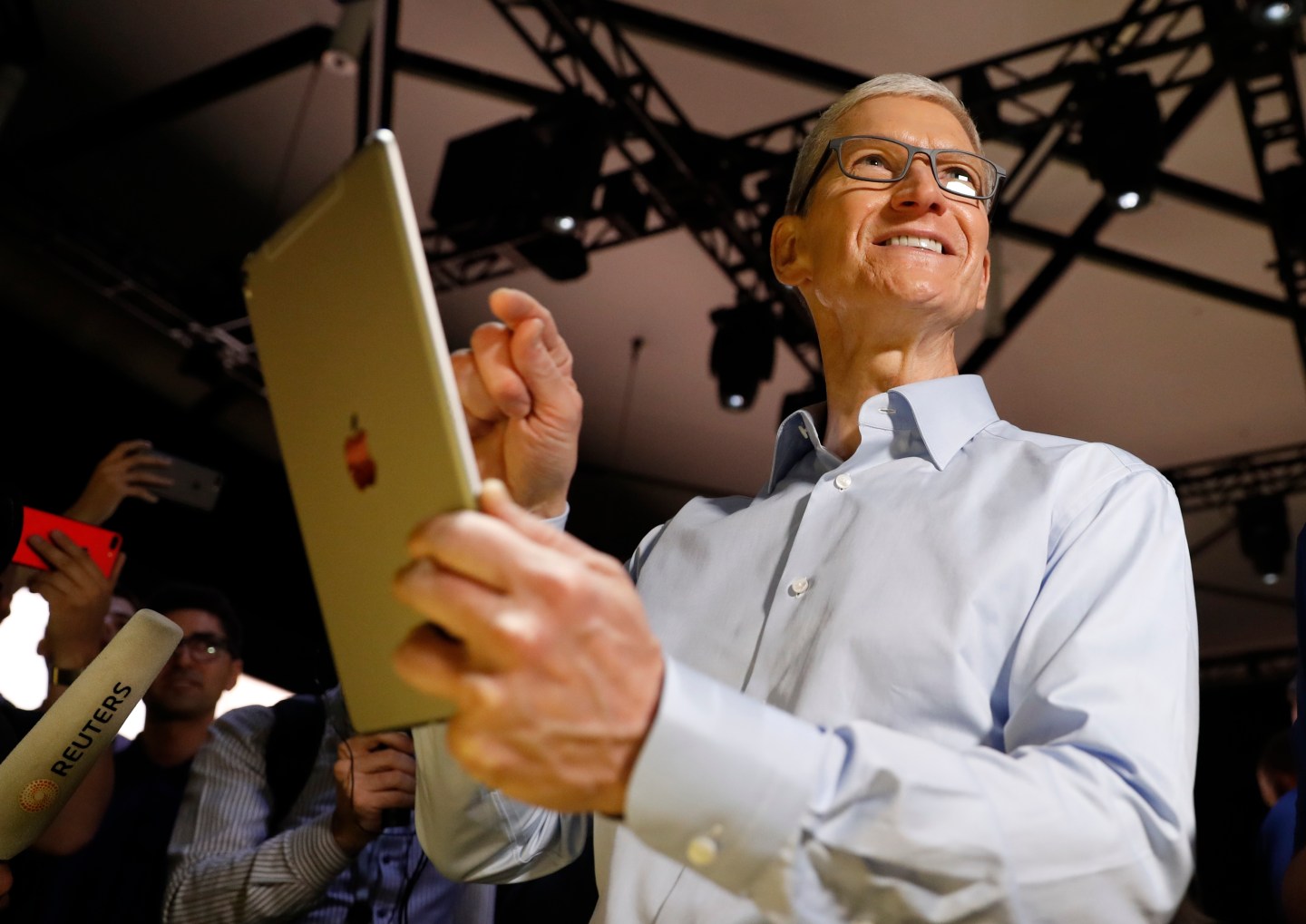 If there’s one image that comes to mind when choosing between an Apple and Microsoft product, it’s probably actors Justin Long and John Hodgman standing alongside one another against a white backdrop. “We use a lot of the same kinds of programs,” says Hodgman, playing the role of a PC dressed in a beige business jacket and slacks, in one iconic “Get a Mac” ad from 2006. “But we retain a lot of what makes us us.”

Fast forward more than 10 years later, and little about that sentiment has changed. Both Microsoft and Apple have recently launched new tablets that they say are designed for productivity and creativity. The fifth-generation Surface Pro, launching on Thursday and starting at $799, is the company’s fastest model yet, with Microsoft claiming longer battery life, better performance, and more accurate stylus input. Apple unveiled a new iPad Pro just last week, which has an updated processor, a new size option, and improved screen technology. The 10.5-inch version starts at $649, while the 12.9-inch size begins at $799.

Both are powerful, portable, and expensive machines designed to fulfill similar roles, each excelling and falling short in their own ways. The iPad Pro functions better as a tablet overall, while the Surface Pro is more capable of replacing your PC.

That’s largely because of the software powering these devices. The iPad Pro runs on iOS, which boasts a massive library of more than two million apps, many of which are optimized specifically for the iPad. You can feel comfortable knowing that when a popular app launches, there’s a good chance it will be available for the iPad and it’ll look good. Meanwhile, Microsoft has long been criticized for its smaller selection of apps, which is part of the reason its mobile platform never took off. Spotify and YouTube are two popular apps still missing from the Windows Store, for example.

The desktop experience is where the Surface has a sizable lead over the iPad Pro. Yes, Apple is making an effort to turn the iPad into a better laptop replacement. When iOS 11 launches in the fall, the iPad will gain a dock that holds more apps, a redesigned app switcher, and a new file management app, all of which make it more like a “real” computer. Even before that update, the iPad Pro can display apps in a split screen view, minimize a video and play it in the corner so you can continue with other tasks, and pull up apps in a sidebar.

But the Surface runs full-fledged Windows 10, making it better equipped for multitasking right out of the gate. That’s the biggest advantage the Surface has over the iPad. If you’ve been using Windows at all in the past few years, you already know how it works. Plus, you can use a mouse with the Surface Pro, which is tremendously helpful for precision.

For getting serious work done, I prefer Microsoft’s Signature TypeCover ($159.99 for Signature, $129.99 for regular) over Apple’s Smart Keyboard ($169 for 12.9-inch, $159 for 10.5-inch). The TypeCover is more spacious, with plenty of room to rest your palms, a full row of function keys, and a sturdier design than in years past. It still doesn’t feel like a laptop keyboard when you’re using it in your lap rather than on a hard surface, but it’s enough to get the job done. The iPad’s keyboard cover is adequate if you’re taking a few notes or sending quick emails, but it’s too cramped to use for a full workday.

Both Apple and Microsoft are marketing their tablets as ideal for creative professionals. With that in mind, both have engineered their own styluses for everything from taking notes to editing photos and sketching artwork. Both the Apple Pencil ($99) and Surface Pen ($59.99 for regular, $99.99 for Platinum) are responsive and fluid, but I prefer Microsoft’s for two reasons: it magnetically attaches to the Surface so it’s harder to lose, and it can simply do more than the Apple Pencil. Clicking the Surface Pen’s top button pulls up a side panel on the tablet with apps designed for stylus input, like Sticky Notes and Sketchpad, as well as suggested apps. The Apple Pencil works well but doesn’t provide any additional functionality, and there’s nowhere to store it.

The Surface Pro has another design advantage over the iPad Pro, too: The kickstand. It makes it possible to adjust the viewing angles to your liking and prop up the Surface on a table or desk even when it’s not connected to its keyboard case. The kickstand on the newest model is even more flexible, allowing the Surface to lie nearly flat against a table similar to a drafting board.

In terms of hardware, both the Surface Pro and iPad Pro are equipped with gorgeous screens, zippy processors, and pretty good battery life. But there are some important differences. Although the Surface Pro’s screen (12.3-inches with a resolution of 2,736 by 1,824) and the 10.5-inch iPad Pro’s display (2,224 by 1,668 resolution) both looked sharp and colorful when streaming video side-by-side, the iPad was better suited for reading. This is mostly thanks to Apple’s TrueTone technology, which softened the blue light coming from the screen to feel easier on the eyes. Scrolling is also smoother on Apple’s tablet, although the difference is only noticeable when quickly flipping through content.

But Microsoft gives buyers more options when it comes to processing power. Surface shoppers can customize their machine with a lower-powered Intel m3 or desktop-class Core i5 or Core i7, all of which are new seventh-generation processors. Microsoft also offers up to 1TB of storage space, while all iPad Pro models run on Apple’s A10X Fusion chip and have a maximum of 512GB of storage space.

Still, both machines offer speedy and smooth performance and can multitask with ease. On both the iPad Pro and Surface Pro, I worked on spreadsheets, wrote articles, opened nearly 20 tabs in Google Chrome, played games with heavy graphics, and streamed video without any stutters. The Surface Pro scored slightly higher in performance tests designed to measure speed when it comes to running apps and processing images, but not by much. However, I did notice that Microsoft’s tablet began to feel warm to the touch while it ran a full system virus scan in the background of those tasks.

Because I chose to use Google Chrome during the course of this test, which gobbled up 80% of my battery usage, the Surface Pro’s didn’t last quite as long as I had expected. I got about six hours out of the device, which might not be enough to get through a full workday without plugging in. If you don’t mind primarily using Microsoft’s Edge browser, you’ll likely get much more mileage out of the device. But the iPad still lasted longer: After using a mix of Chrome and Safari, I only burned through a quarter of the battery after three and a half hours.

If you’re trying to decide whether a Surface Pro or iPad Pro is right for you, the answer largely depends on your preferences and how you plan to use it. The iPad Pro has a better selection of polished apps, is lighter and more portable, and is better for reading. In my experience, it’s plenty powerful enough to keep up with devices running on the latest Intel processors. But the software just isn’t there yet if you often plan to use it as a laptop replacement. The Surface Pro’s Windows 10 support, integrated kickstand, and superior accessories make it better at functioning as a work computer, but its app selection needs work.

Think of it this way: The iPad Pro is the device I’d choose to take on a long car ride, especially if I want to catch up on a lot of work-related reading, fire off some emails, and squeeze in some gaming. The Surface Pro is the computer I’d toss in my bag on the way to a conference to publish stories or bring a meeting to manage notes. Perhaps Justin Long, dressed in a T-shirt and jeans as the Mac, puts it best: “You should see what this guy can do with a spreadsheet,” he says in the ad, gesturing toward his PC counterpart. “It’s insane.”