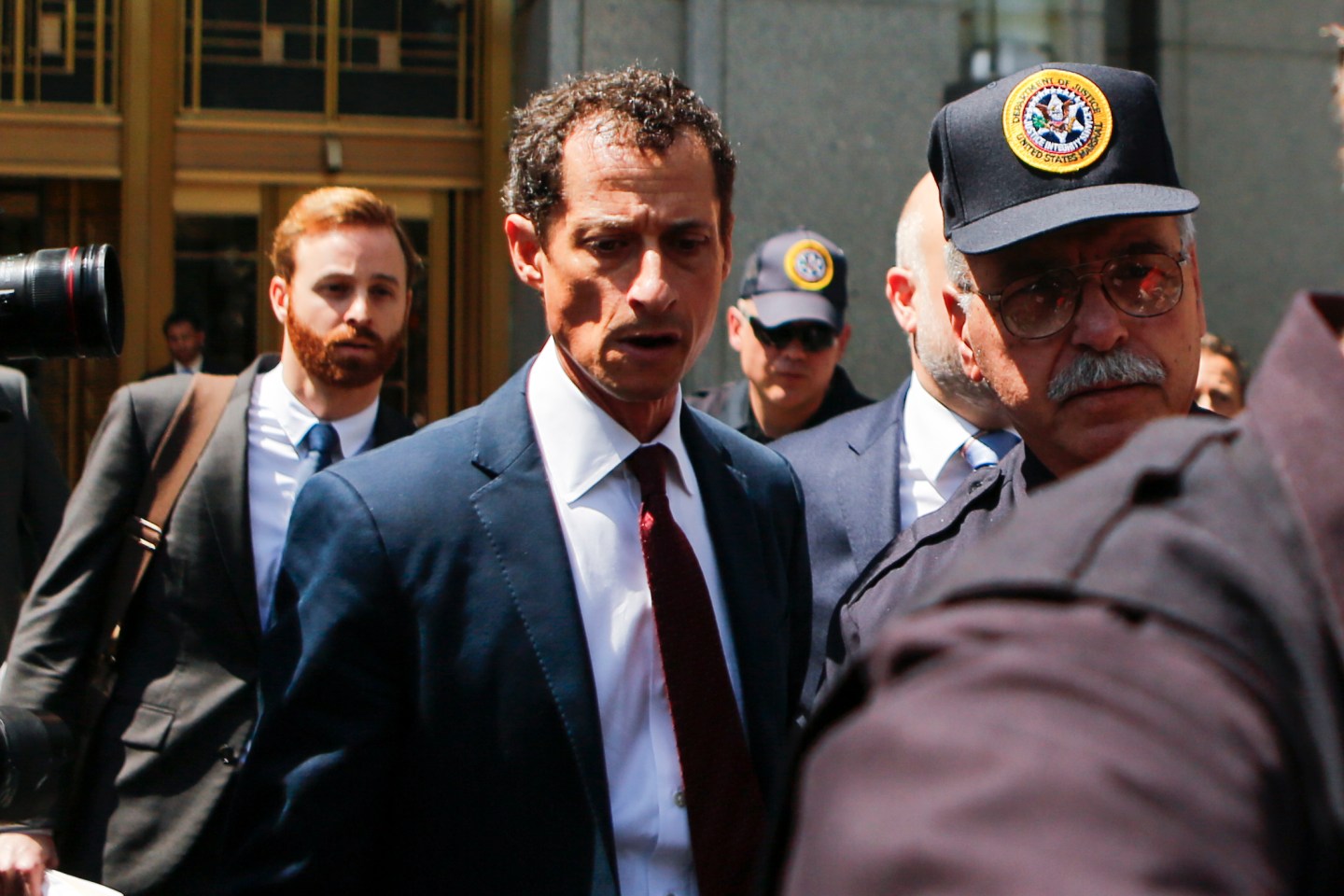 NEW YORK, NY - MAY 19: Former Democratic Congressman Anthony Weiner (C) exits federal court in Manhattan after pleading guilty in sexting case on May 19, 2017 in New York City. Weiner, who resigned from Congress over a sexting scandal, pleaded guilty on friday to federal charges of transmitting sexual material to a minor and could face a prison term. (Photo by Eduardo Munoz Alvarez/Getty Images)
Photograph by Eduardo Munoz Alvarez via Getty Images

Most people should know that if they don’t want something to be seen or read, they shouldn’t post it online. There is perhaps no more cautionary tale than former New York congressman Anthony Weiner, whose online sexting took down his own political career, and quite possibly impacted the 2016 presidential election, tilting the country’s sentiment against Hillary Clinton.

But some lessons are hard-learned by too many.

Earlier this month, the Harvard Crimson reported that Harvard University rescinded acceptance letters to at least 10 members of the incoming class of 2021 after an investigation into messages posted by the students in a private Facebook (FB) group. In the private group, students posted memes and other images concerning rape and dead children, mocking the Holocaust, and jokes directed toward ethic and racial groups.

There are two important lessons to be drawn from this story.

Many often forget the first: Freedom of speech does not mean freedom of consequences. While the students’ memes and images may have also violated Facebook’s standards, they more importantly violated Harvard’s community standards—which say that Harvard “reserves the right to withdraw an offer of admission under various conditions, including if an admitted student engages in behavior that brings into question his or her…moral character”—and therefore the students were justifiably removed.

The second lesson is that nothing posted online, even in private groups, is really private. The web is a series of URLs all linking everything together. Anything posted comes with a unique URL that can be emailed, shared, tweeted, or reposted, and can therefore circumvent any private group. What the students were posting could be seen by anyone if any member decided to copy the URL and share it with anyone else.

Few would argue that Harvard did not take the correct course of action. Social media can be a wonderful thing to connect friends and family, and a powerful marketing tool. But it can also be a forum to share racist, sexist, and homophobic language and images, creating an echo chamber where individuals see their racist, sexist, and homophobic ideas as commonplace, which allows them to spread.

From Anthony Weiner to these 10 teenagers, everyone must remember that actions have consequences, and what we post online can lead us to lose our jobs, our college admissions, our relationships with friends and family, and even our sense of right and wrong.

These 10 teenagers lost the opportunity to attend what was likely the college of their dreams. It was a hard-learned lesson, but one that will hopefully benefit them in the future.

Andrew Selepak is a professor in the department of telecommunication at the University of Florida, and director of the graduate program in social media.