The King of Mall Kiosks Aims to Bounce Back 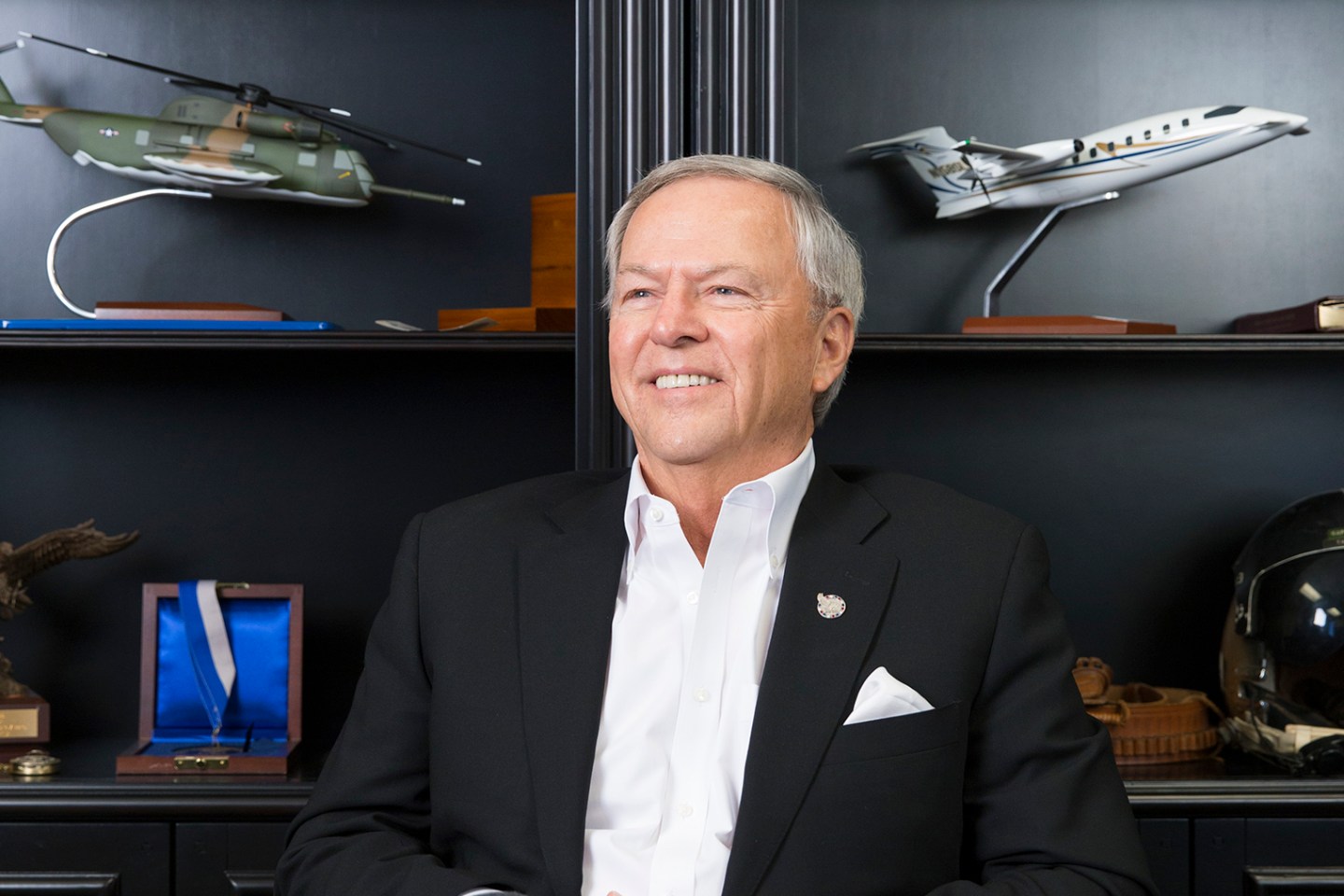 Max James, 74, knows the ups and downs of an entrepreneur’s life. The son of a Tennessee sharecropper, he flew Air Force helicopters to rescue downed fighter pilots during the Vietnam War before buying RE/MAX franchise offices in California. When the market tanked, he moved to nutritional supplements. That business slid, so he launched American Kiosk Management, which owns and operates carts in shopping malls. With a downturn in retail, AKM’s revenue fell from a high of $175 million in 2008 to $80 million last year. Now James is busy reinventing company services, aiming to create the next upward swing. His story:

I was born in Humboldt, Tenn., and my dad was a sharecropper. I was 8 when I got behind two gray mules and learned how to plow the land until we could afford a tractor. We didn’t have indoor plumbing, and I wore shirts that my mom made out of flour sacks. From my dad, I learned that the more you knew, the more you could earn. I picked cotton, shucked corn, and baled hay, so I earned my way.

But I hated farming, and to my dad’s credit, he let me go into town at age 13 to explore something else. I got a job sacking groceries and worked sales in a clothing store. My senior year of high school I was chosen to go to Washington to be an assistant for Rep. Robert A. Everett of the 8th Congressional District in Tennessee.

For a farm boy, I was in tall cotton. I didn’t want to go back to Tennessee, so I finished high school and got into the Air Force Academy. I liked the discipline and organization of the military. Then Vietnam came along. I joined the Jolly Green Giant Combat Rescue squadron, which rescued downed fighter pilots. I got knocked down twice and was awarded three Distinguished Flying Crosses.

When I got out of the military, I went to Stanford University for an MBA and ended up working for Adnan Khashoggi, who called himself a merchant prince in Saudi Arabia. I’d fly from country to country, doing deals and enjoying parties on Adnan’s yacht. One day it hit me that I’d lost perspective. I was spending too much time overseas, away from family, so I quit.

In 1978, I moved my family to Sacramento and hung out a real estate shingle. I became a partner with Days Inn of America and built hotels and motels, which was lucrative, and bought the franchise rights for a large swath of California for RE/MAX.

But when the 1990 recession hit, I got into serious financial trouble. I borrowed money and sold my dream home. I was struggling not to go belly-up. Some friends from the nutritional supplement industry called and asked me to join a network marketing company called New Vision International.

I became a distributor, built an organization of about 30,000 people, and made a lot of money. I went from losing my house to making about $80,000 a month, which was a blessing. That’s why my mantra is “The harder I fall, the higher the bounce.” When things go bad, if you learn from the situation, you can bounce back higher.

Then, in 1996, I left New Vision because of a disagreement on how supplements for ADD were being promoted. I ended up working with Metabolite, a network marketing company that let you sell their product in mall kiosks. I opened 84 Metabolite carts and kiosks, making about $40,000 a month. I liked the business, so I started American Kiosk Management and began looking for other products to sell on the carts. We sold things like Discgear, ­yo-yos, NFL and NBA apparel, and Avon cosmetics.

The biggest challenge was creating sufficient cash flow to expand at a rapid pace. The competition to get into malls was very keen, so I formed six LLCs with various investors. They’d put up x amount of money; I’d return 70% of the profits to them until they got their money back; and then they would get 30% and I got 70%.

It cost about $10,000 to launch each location, which covered buying the products to sell, and the lease and payroll. In the beginning we didn’t have a national bank arrangement, so when we opened in a mall, we would choose a local bank with a branch in the mall, or nearby, so that night deposits would be secure.

We ended up with a bunch of banks, so every night I would call each bank to find out how much money we had at each location. I would then FedEx checks to place product orders every night because we didn’t have enough money to store up inventory.

At some locations we’d run out of product, and the salespeople were trained to say, “This is selling so well, we can’t get it in fast enough. If you’d like to prepurchase this item, you’ll be the first to get it when it comes in.” We were preordering to get the cash to obtain the product to sell.

Our biggest seller became Proactiv, a line of acne and skin care products. Back then Proactiv could only be ordered on an 800 number, and I convinced them to let me sell it in malls. We built the Proactiv mall business up to 400 manned carts in the U.S. and Canada and began selling the line through automated machines as well. We were opening a new mall location every other day. In 2008 we were doing $170 million in Proactiv sales and about $5 million in other products. But when the 2008 recession hit, sales went way down.

Today the shopping mall industry is in total chaos. Amazon (AMZN) and other online companies accelerated at a rate no one expected. We reduced our manned locations, and now have about 100 carts and 600 automated vending locations. Last year’s annual revenue was $80 million.

We had to reinvent ourselves. Because of our reputation, five or six companies a week now ask us to test their products in a mall or handle their human resources or marketing departments. We’ve done kiosk testing for SolarCity, Revlon, and others.

Most entrepreneurs go through financial cycles. Who knows what’s next? I’ve been up and down, and though we’re in a downturn now, I fully expect to bounce back higher than ever. You just have to be resilient and embrace change.

How to Rebound After Failures

Bouncing back is often a waiting game. When my first real estate company didn’t do well, I was approaching panic mode. But I refused to accept a “make do” employment position. Holding out for a better opportunity led to becoming a partner in Days Inn and my first seven-figure net worth.

When I had to sell my home in 1990, I had trouble making the payments on a rental house and faced hordes of debt collectors. It took courage to call friends and associates, show humility in admitting my financial straits, and ask to borrow money. For an entrepreneur to “mount up” and try again takes courage, knowing that another failure is likely inevitable at some point.

A version of this article appears in the June 15, 2017 issue of Fortune with the headline “The Harder I Fall, the Higher the Bounce.”