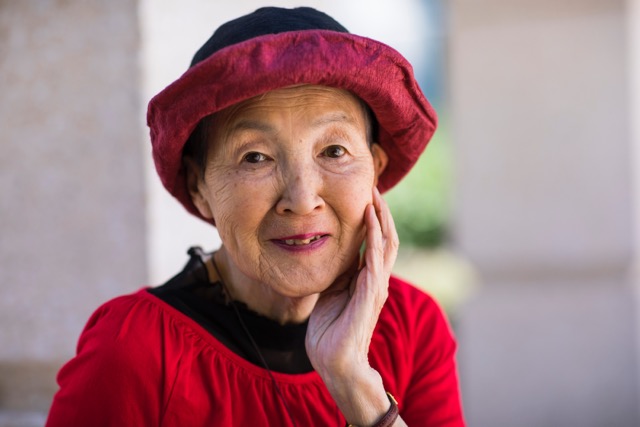 Retired banker Masako Wakamiya was frustrated by the lack of mobile games that catered to the elderly, who have a tougher time keeping up with the action-packed games that are popular with teens. So the 82-year-old from Japan started taking online tutorials to learn how to write software code.

“I didn’t see any apps for the elderly, so I decided to create my own,” Wakamiya told Fortune.

Wakamiya, who first started using computers when she was 60-years-old, ultimately created a game in March that is based on the Japanese doll festival, Hinamatsuri, a holiday that celebrates the health and well-being of girls. And to appeal to older players, its pace is slow and its narrator speaks slowly.

Wakamiya will be the oldest developer attending WWDC, Apple’s annual developer conference that starts Monday in San Jose, Calif. Like many of her fellow attendees, Wakamiya’s free app, called Hinadan, is available in Apple’s App Store, and she is eager to create more.

In contrast, the youngest attendee at this’s year’s WWDC is Yuma Soerianto, a 10-year old boy from Melbourne, Australia who started coding at age six by following online courses on Code.org and from Stanford University that he found on Apple iTunes U, which provides free college courses online. In four years, he has created four apps for Apple’s App Store, including Weather Duck, a weather app for kids.

During his nearly 20-hour journey to San Francisco for the conference, Soerianto created another app that lets users easily calculate the sales tax on what they’re thinking of buying.

Wakamiya and Soerianto are attending WWDC this year as part of an Apple scholarship program that gives hundreds of free tickets to developers worldwide who create apps for Apple devices. Apple has been making a big effort to increase diversity at WWDC, which like most tech conferences, has mostly attended by white and Asian males.

This year’s WWDC is the most international yet, according to Apple, and has the most students from elementary, middle and high schools. But the company declined to provide any numbers around the increase in international attendees or students.

“I feel like we are really starting to making a change,” Esther Hare, Apple’s senior director of developer marketing at Apple, said in an interview with Fortune.

The scholarships are also part of Apple’s push to get younger people to use Apple products and services. In 2016, Apple released a new iOS app called Swift Playgrounds that teaches children and young adults how to create mobile apps using Apple’s own developer language, Swift. A few weeks ago, Apple announced that it had created a course for learning Swift at six U.S. community colleges.

For Apple, the benefit of attracting young engineers to develop iOS apps is similar to convincing them to use the latest iPhone and MacBook. The company wants to attract loyal developers who will create interesting apps for iOS and expand the technology giant’s mobile app ecosystem. These developers can also be evangelists for Apple’s services.

It’s already happening with 10-year-old Soerianto. In August 2016, he created his own YouTube channel called “Anyone Can Code,” where he posts video tutorials about how to create iOS apps using Swift.

“It used to be that you were cool if you had the latest and greatest thing, and now it’s cool to actually be creating the greatest thing,” said Hare.

But it’s not just youth that Apple is looking for. “We need developers from all different backgrounds,” Hare added, which is why she’s excited about Wakamiya’s passion for creating apps.

Although she only debuted her first app a few months ago, Wakamiya says she already has other ideas for mobile apps. And she hopes to learn more about how to write the code for it during the coming week at WWDC.