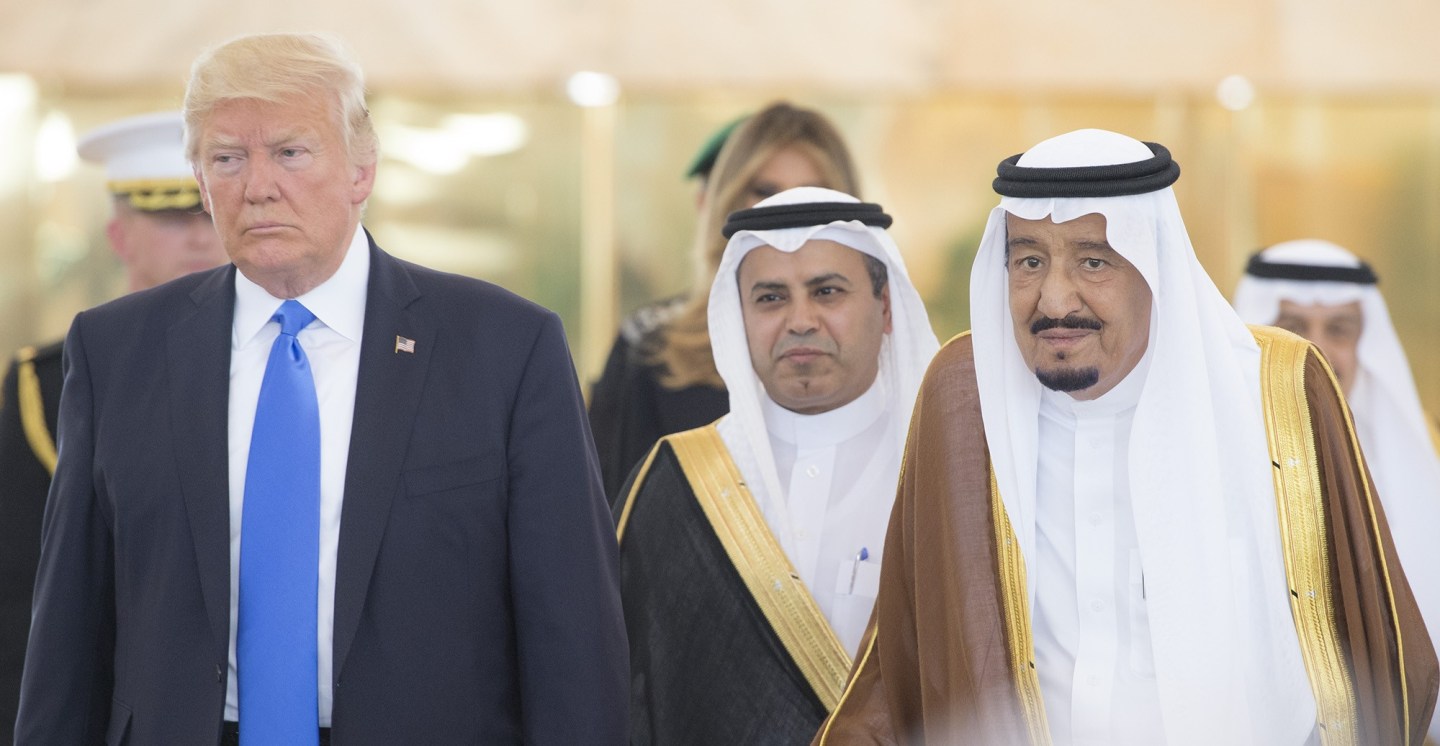 Under political fire at home, U.S. President Donald Trump sealed a $110 billion arms deal with Saudi Arabia on Saturday on his maiden foreign trip as he struggled to shift attention from the aftermath of his firing of the director of the FBI.

The arms deal, plus other investments that U.S. Secretary of State Rex Tillerson said could total up to $350 billion, was the central achievement of Trump’s first day in Riyadh, first stop on a nine-day journey through the Middle East and Europe.

Speaking to journalists after a ceremony to exchange agreements, Trump said it was a “tremendous day” and spoke of “hundreds of billions of dollars of investments into the United States and jobs, jobs, jobs. So I would like to thank all of the people of Saudi Arabia.”

King Salman gave Trump a remarkably warm greeting, meeting him at the steps of Air Force One on arrival, shaking the hand of Trump’s wife, Melania, riding with Trump in his limousine and spending most of the day with him.

But the political turmoil back in Washington consumed the headlines in the United States and cast a long shadow over the start of Trump’s trip, which will include stops in Israel, the Vatican, Italy and Belgium.

His firing of Federal Bureau of Investigation head James Comey on May 9 and the appointment of a special counsel to investigate Trump’s 2016 presidential election campaign ties to Russia have raised the question of whether he tried to squelch a probe into allegations of a Russian connection.

Fanning the flames was a New York Times report that Trump had called Comey a “nut job” in a private meeting last week in the Oval Office with Russian Foreign Minister Sergei Lavrov and ambassador Sergei Kislyak. The Times quoted briefing notes of the conversation.

Amid a mood of frustration, officials on board Trump’s Riyadh-bound presidential plane scrambled to coordinate on responding to the story with staff in Washington and those who had just landed in the Saudi capital.

Asked for a response, the White House said that for national security reasons, “we do not confirm or deny the authenticity of allegedly leaked classified documents.”

Russia’s Interfax news agency on Saturday quoted Lavrov as saying he had not discussed Comey with Trump. “We did not touch this issue at all,” the minister said.

In another development, the Washington Post said a White House official close to Trump was a significant “person of interest” in the investigation into possible ties with Russia.

Tillerson, asked about the story, said he did not know who the “person of interest” was.

Against that backdrop, Trump soldiered through a long day of diplomacy.

Both he and Tillerson made clear the arms deal was aimed at countering Iran on a day that Hassan Rouhani was re-elected as Iran’s president.

Tillerson said Rouhani should use his second term to end Iran’s ballistic missile testing and stop promoting extremism in a volatile region.

He said he had no plans to talk to his Iranian counterpart but that he in all likelihood he would do so “at the right time.”

Al-Jubeir said Trump and King Salman agreed that action had to be taken to ensure Iran did not continue “aggressive policies in the region.”

Trump’s trip has been billed by the White House as a chance to visit places sacred to three of the world’s major religions, while giving him time to meet with Arab, Israeli and European leaders.

King Salman gave a more favorable welcome to Trump than he had granted last year to Trump’s predecessor, Barack Obama, who was seen in the Arab kingdom as soft on Iran and hesitant on Syria.

Trump and King Salman seemed at ease with each other, chatting through an interpreter. At the royal al-Yamama palace, the king draped around Trump’s neck the King Abdulaziz medal, the country’s top civilian honor.

At the end of the day, Tillerson and U.S. Commerce Secretary Wilbur Ross, holding swords, were seen participating in a ceremonial dance at Marraba Palace with aSaudi group.

As Trump arrived for dinner with the king, a spectacle awaited him: Men dressed in long white turbans and carrying swords swayed and chanted in unison to beating drums in a courtyard. Trump, clearly enjoying himself, smiled and swayed, even seeming to dance a little at the center of the group.

During their conversation earlier in the day, the king was overheard lamenting the Syrian war. Trump ordered air strikes against a Syrian airfield in April in response to a chemical weapons attack by government forces against civilians.

“Syria too used to be one of the most advanced countries. We used to get our professors from Syria. They served our kingdom. Unfortunately, they too brought destruction to their own country. You can destroy a country in mere seconds, but it takes a lot of effort,” he said.

Trump’s response could not be heard.

The arms package includes a pledge by the kingdom to assemble 150 Lockheed Martin Blackhawk helicopters in Saudi Arabia, in a $6 billion deal expected to result in about 450 jobs in the kingdom.

U.S. technology and engineering conglomerate GE said it had signed $15 billion of agreements with Saudi organisations.

Trump is to deliver a speech in Riyadh on Sunday aimed at rallying Muslims in the fight against Islamist militants. He will also attend a summit of Gulf leaders of the six-member Gulf Cooperation Council.

Shortly after taking office, Trump sought to block people from several Muslim-majority nations from entering the United States, but the travel ban has been blocked by federal courts.