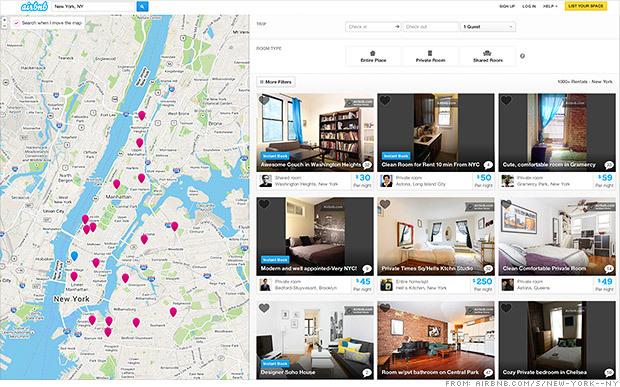 It was only supposed to be temporary.

That’s how Joanna Rodriguez, 26, viewed the Bronx shelter she and her two young children moved into last year: as a way station where she could get her act together after fleeing an abusive boyfriend. Determined to leave as soon as possible, she took whatever jobs came her way: A cashier at Popeye’s, a delivery person for Google. None paid enough.

And then she heard about a position with Cooperative Cleaning, a worker-owned company focused on hiring women, most of whom are African-American or Latina, that was developing a pilot program with Airbnb. Rodriguez could earn $15 an hour, with a guaranteed 30 hours of work a week, plus benefits to help clean Airbnb apartments for New York City hosts.

With this gig, Rodriguez would soon become part of the unsung collateral of the October, 2016 state ruling against Airbnb, which carries fines of $1,000 to $7,500 simply for advertising your apartment online.

The new law, which went into effect Jan. 31, has made it easier to enforce such violations. And the city has shown that it means business: Since Jan. 31 there have been 139 violations issued to 16 hosts or entities, totaling a proposed $283,000, according to the mayor’s office.

Interestingly, the ruling hasn’t impacted the actual number of listings in the city: The company says that there are 46,304 active listings; Murray Cox, the founder of Inside Airbnb, an independent data-tracking website, puts the number at 40,629. Apart from a small dip in November, the numbers have been relatively flat since, he says—meaning that many people have ignored the law and continued renting out their units illegally.

But a recent report by Swiss investment bank UBS noted that in February 2017, both Barcelona and New York showed year-over-year declines in available listing nights of around 10%.

“Our analysis suggests it is likely that regulation is having a negative impact on the supply and demand growth of Airbnb, especially in New York and Barcelona,” UBS told CNBC. (In November, Barcelona fined Airbnb and Homeaway $633,600 each for advertising and renting out apartments to tourists without a license).

The impact of the ruling isn’t limited to room availability, though. The crackdown on Airbnb has had a ripple effect in the service economies of the places it’s located. Even the rule-breakers are now largely operating in stealth mode, hosting less frequently—and, when they do host, they may be less inclined to hire a third-party cleaning service.

As a result, there is a large but little-noticed secondary class of workers, like Rodriguez, who have been affected by the ruling: the cottage industry of mostly female cleaners and managers who service properties, women who have been launched into entrepreneurship through Airbnb.

For months after, after Rodriguez was hired in January, 2016, the job was pretty great. She mopped, dusted, made beds and scrubbed toilets in apartments in Brooklyn and Manhattan. With her earnings along with her income she received from public assistance, she was making enough to feel like she was on solid footing.

But by November, she was working only 30 to 25 hours a week. By January, she was down to about eight.

Soon, Cooperative Cleaning gathered Rodrigues and a group of other workers together to tell them that their hours would be slashed. “The company said it was because of the ruling,” Rodriguez said.

Airbnb says it has no way of measuring how the ruling has affected small businesses or other New Yorkers who rely on Airbnb business. (And let’s face it, New Yorkers have been offering up their apartments for short-term rentals long before Airbnb was born.)

But the group of cleaners who relied on the sharing economy titan appears to be particularly vulnerable. To be sure, Airbnb’s rise has also put hotel employees could at risk. A 2015 report by the Hotel Association of New York City found that New York hotels had a $451 million revenue loss because of Airbnb. Housekeepers and launderers, of course, are a big part of the hotels’ business; if the hotel industry suffers, they could get laid off, too. However, most of them have unions behind them, whereas the NYC cleaning economy is a labor force largely made up of female independent contractors, many of whom are single mothers.

“This underground economy has helped so many people—I don’t think the city realizes who it hurts when they pass these laws,” says Maggie Barnett, 35, the co-founder, along with Andrea Friedman, of City CoPilot, which offers “front desk services”—including luggage storage, key exchange, package acceptances, and laundering—out of storefronts on Allen Street, in South Williamsburg, and in Times Square. Some of their clients were Airbnb hosts.

“It’s suboptimal,” she says of the prospect of diminished business from Airbnb hosts on her company. “But what it really hurts is our employees, our consultants and our customers.”

City CoPilot employs a dozen housecleaners a day, almost all of them women. On a regular basis, since the law went into effect at the beginning of February, Barnett says, cleaners come in begging for work. “Many of these cleaners were supporting themselves cleaning for Airbnb,” she says. “Hosts are cutting back, many times cleaning their own apartments and doing their own laundry to save money.”

Local laundry businesses have also been impacted, like those that Barnett and Friedman hire to wash linens and towels. “I gave a Laundromat on Stanton Street a ton of business—we are at least 20% of [the owner’s] business,” estimates Barnett. “She doesn’t speak English well, but she understands when we’re dropping of ten bags versus zero.”

Cityami, a property manager for short-term rentals that also offers listings and marketing, cleaning, 24/7 guest care, and guest concierge services, has also had a huge dropoff in customers, says Michelle Himden, 32, the company’s founder and CEO. Himden estimates that she’s lost about 20 percent of her client base in Manhattan, Brooklyn and Queens. “A lot of people got scared and said, ‘I can’t do it anymore,” she says.

To compensate for her own loss in income, her company is expanding to other cities where Airbnb is legal and the cities have embraced the increased tourism revenue from part-time home shares. Cityami is launching in Miami in May and in Philadelphia this summer. Although they were always planning on expanding to other cities, the ruling has sped up the process.

Michael Elsas, a senior strategic advisor and former president of Cooperative Home Care Associates, which operates Cooperative Cleaning, finds the situation immensely disappointing. “I’m in the business of job creation,” he says. “It’s for people who are new to the workforce, who have either been on welfare or are on it—and this gets them off.”

Wendy Brown worked 35 hours a week with Cooperative Cleaning, earning $350 to $400 a week, plus health insurance. Sometimes she did two or three jobs in one day.

Today, she works two to three days a week with the same company, making between $40 and $100. “I can’t work like this,” says Brown, 49, who lives in the Bronx. “I have to find another job.” She has somewhat of a cushion—her husband, 30-year-old daughter and 26-year-old son all live with her and they have jobs. But the void in her bank account is palpable.

Airbnb has been doing battle with regulators, and the hotel industry, for a long time. Earlier this month the company claimed some important victories in two of its most contentious and longstanding legal fights. In San Francisco, where it is headquartered, the company settled a lawsuit over local rules that imposed steep fines for unregistered hosts—and came to a new agreement with the city on new terms for registration and regulation.

And in New York, where Airbnb has sought to amend or update the 2010 law, New York State Assemblyman Joseph Lentol, a Democrat, introduced a bill that would permit short-term rentals in New York City, so long as hosts register their apartment with the state and only rent the home in which they live. But the bill, already being contested by Airbnb’s opponents, has a long way to go before becoming law.

Rodriguez, meanwhile, has been approved for city housing, and is waiting for the phone to ring with an offer. She just started a new job with a different cleaning company, and she hopes this one will last.

It has nothing to do with Airbnb.

This story was supported by the journalism non-profit the Economic Hardship Reporting Project.