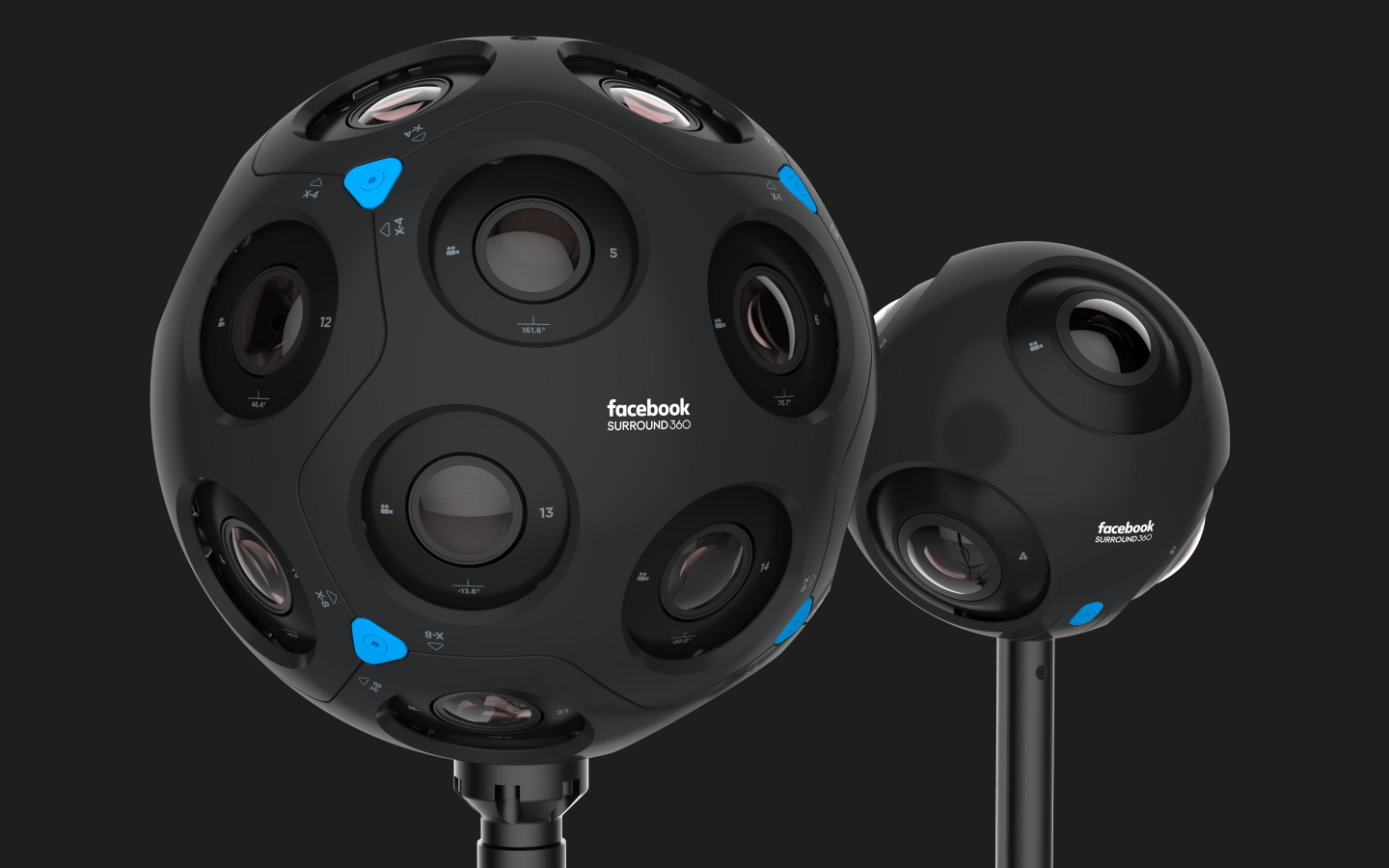 Facebook has two new high-tech cameras that it wants companies to use to film 360-degree video.

The new cameras, announced at Facebook’s annual F8 developer conference in San Jose, Calif. on Wednesday, are supposed to be improvements to the social networking giant’s previous 360-degree camera that debuted last year. The new models are smaller and more portable than the previous camera, can more easily connect and transmit content to video editing software, and contain algorithms that add a sense of depth to the video. The cameras also let people view filmed video from different perspectives through what’s known as six-degrees of freedom.

Facebook is building 360-degree cameras to presumably convince more production studios and filmmakers to create 360-degree videos. If more people make compelling 360-degree video, it’s possible that mainstream consumers will be more inclined to watch the content and perhaps buy Facebook’s Oculus Rift virtual reality headset. Facebook has previously said that it expects 360-degree video to become a big hit with consumers and it’s been steadily debuting new features for its users to make it easier to watch 360-degree videos from its core social networking service.

Facebook’s cameras would compete against others by Nokia, f500link]Google[/f500link] (GOOG), and camera maker Lytro in the currently nascent market.

Video captured by Facebook’s older 360-degree camera as well as models by other manufacturers often have a flattened appearance when viewed in virtual reality headsets like Facebook’s Oculus Rift or HTC’s Vive. Although users can turn their heads to see the video displayed in all directions, objects like tables or trees seem slightly off.

Facebook’s algorithms for fixing the problem add a layer of pixels behind objects on the screen, which tricks human eyes to perceive more depth. It works similar to how artists create depth in drawings through techniques like shading, which give the illusion of a 3-D image on a 2-D piece of paper.

Facebook showed reporters various examples of 360-degree video captured by one of the cameras, called the x24, that highlighted the difference between the new version and the older model. In a 360-degree video clip of an indoor rainforest exhibit at the California Academy of Sciences that was filmed using the older model, viewers could turn their heads to see lush greenery in every direction.

However, the video appeared flat due to the lack of depth, which makes scenery like the trees seem less realistic and more like they were merely a part of a video one was watching on a television screen, albeit a screen that surrounds one’s head. With the newer camera, the scene made the trees stand out more and created a better illusion that you could peer behind them.

Still, the new camera’s images were buggy when viewed while moving. After tilting your head to view the video from a different perspective, there’s a shimmering effect that produces a mini-aurora borealis, or Northern Lights, from individual objects. Additionally, the software bug caused a museum bench to appear as if its top was wobbling like it was made from liquid.

Brian Cabral, a Facebook engineering director, stressed that Facebook is still working to perfect the camera and that “it is on its way to a finished product” that will be made available to manufacturers later this year.

Unlike Facebook’s older camera model, Facebook plans to license the technology to other companies instead of making the blueprints available for free in an open-source model. In this licensing model, Facebook will permit certain companies to build the cameras based on the camera design licenses it sells. Cabral said that companies wanted to buy the camera instead of building it themselves, and that the licensing model lets other manufacturers build the cameras and then sell them.

Facebook has no plans to sell the cameras itself, he said.

Cabral said Facebook is negotiating with potential licensing partners, but he declined name them. He also declined to comment on how much the cameras would cost or how many of the new 360 cameras Facebook has built so far. For the older 360 camera, Facebook had estimated that it would cost around $30,000 to build.

Facebook executives also said several companies that make video editing software like Adobe (ADBE) and Otoy have partnered with Facebook so that their tools work more easily with the camera. Using Otoy’s video editing software, for example, people can superimpose custom backdrops on top of their 360-degree video, like mountains or forests, so that they seem like part of the video’s background.