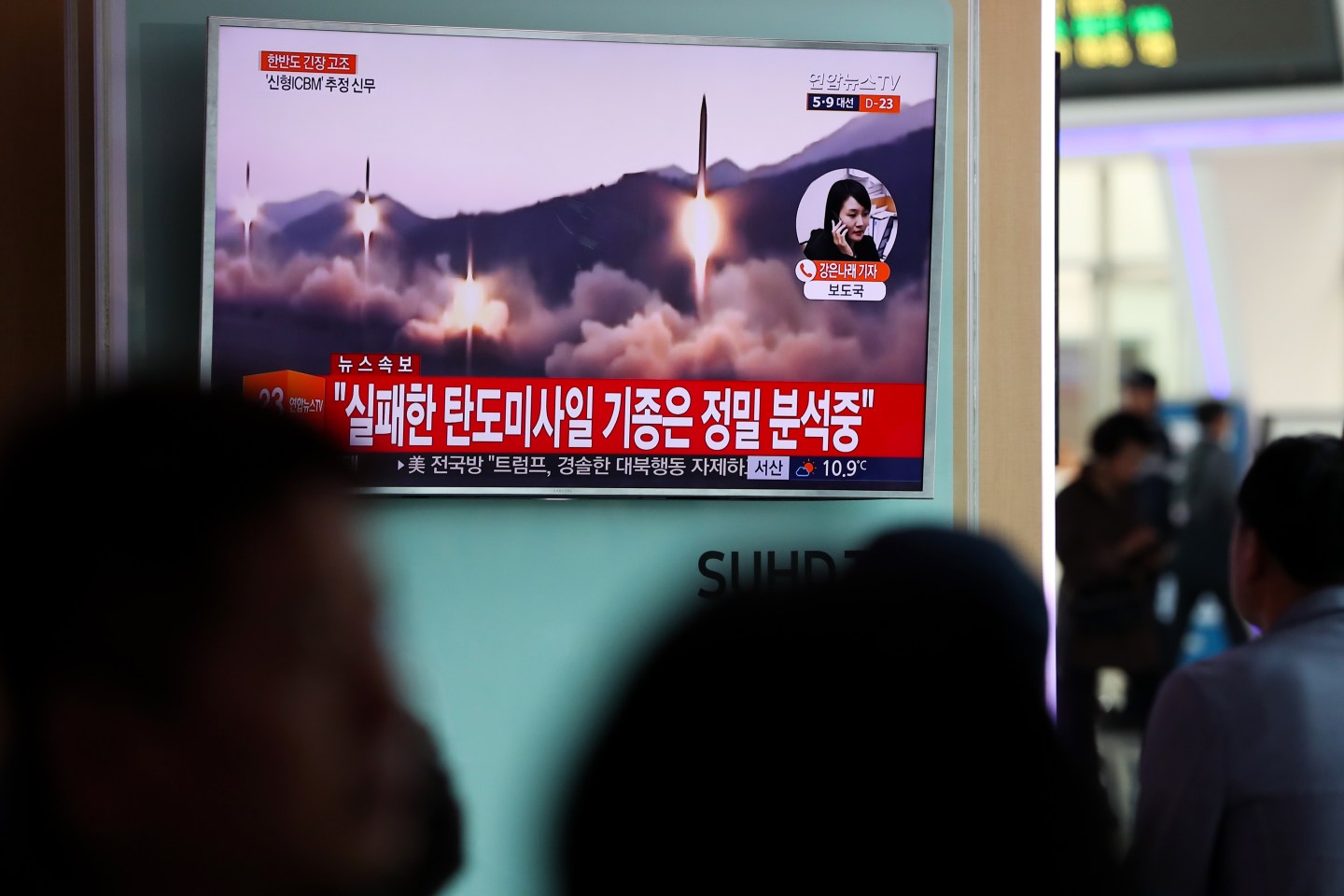 A North Korean missile “blew up almost immediately” on its test launch on Sunday, the U.S. Pacific Command said, hours before U.S. Vice President Mike Pence was due in South Korea for talks on the North’s increasingly defiant arms programme.

The failed launch from North Korea’s east coast, ignoring admonitions from major ally China, came a day after North Korea held a military parade in its capital, marking the birth anniversary of the state founder, in which what appeared to be new long-range ballistic missiles were on display.

Pence is due in Seoul at the start of a 10-day trip to Asia in what his aides said was a sign of the U.S. commitment to its ally in the face of rising tension over North Korea.

China Says U.S.-North Korea Tension Has to Be Stopped Before It Becomes ‘Irreversible’

The North has warned of a nuclear strike against the United States if provoked. It has said it has developed and would launch a missile that can strike the mainland United States but officials and experts believe it is some time away from mastering the necessary technology.

“The North attempted to launch an unidentified missile from near the Sinpo region this morning but it is suspected to have failed,” South Korea’s Office of the Joint Chiefs of Staff said in a statement.

The U.S. Pacific Command said the missile “blew up almost immediately”, adding the type of missile was being analysed.

The timing of the test, coinciding with Pence’s trip and a day after the military parade, would suggest deliberate defiance.

Pence had been briefed on the failed launch en route to Seoul and had been in touch with President Donald Trump, White House aides said.

South Korea said it would convene a national security council meeting on Sunday.

The North launched a ballistic missile from the same region earlier this month ahead of a summit between the leaders of the United States and China to discuss the North’s arms programme.

That missile flew about 60 km (40 miles) but what U.S. officials said appeared to be a liquid-fuelled, extended-range Scud missile only travelled a fraction of its range before spinning out of control.

China has spoken out against North Korea’s missile and nuclear tests and has supported U.N. sanctions. China on Friday again called for talks to defuse the crisis.

A U.S. Navy attack on a Syrian airfield this month with Tomahawk missiles raised questions about Trump’s plans for reclusive North Korea, which has conducted several missile and nuclear tests in defiance of U.N. sanctions, regularly threatening to destroy the United States.

Sinpo, where the Sunday launch took place, is the site of a North Korean submarine base and where the North has tested the submarine-launched ballistic missile it is developing.

“It appears today’s launch was already scheduled for re-launching after the earlier test-firing,” said Kim Dong-yub, a military expert at Kyungnam University’s Institute of Far Eastern Studies in Seoul.

“This launch can possibly be a test for a new type of missile or an upgrade,” Kim said.

Tension had escalated sharply in the region amid concerns that the North may conduct a sixth nuclear test or a ballistic missile test launch around the April 15 anniversary it calls the “Day of the Sun”.

The White House has said Trump has put the North “on notice”.

Impoverished North Korea and the rich, democratic South are technically still at war because their 1950-53 conflict ended in a truce, not a peace treaty. The North regularly threatens to destroy the South and the South’s main ally, the United States.