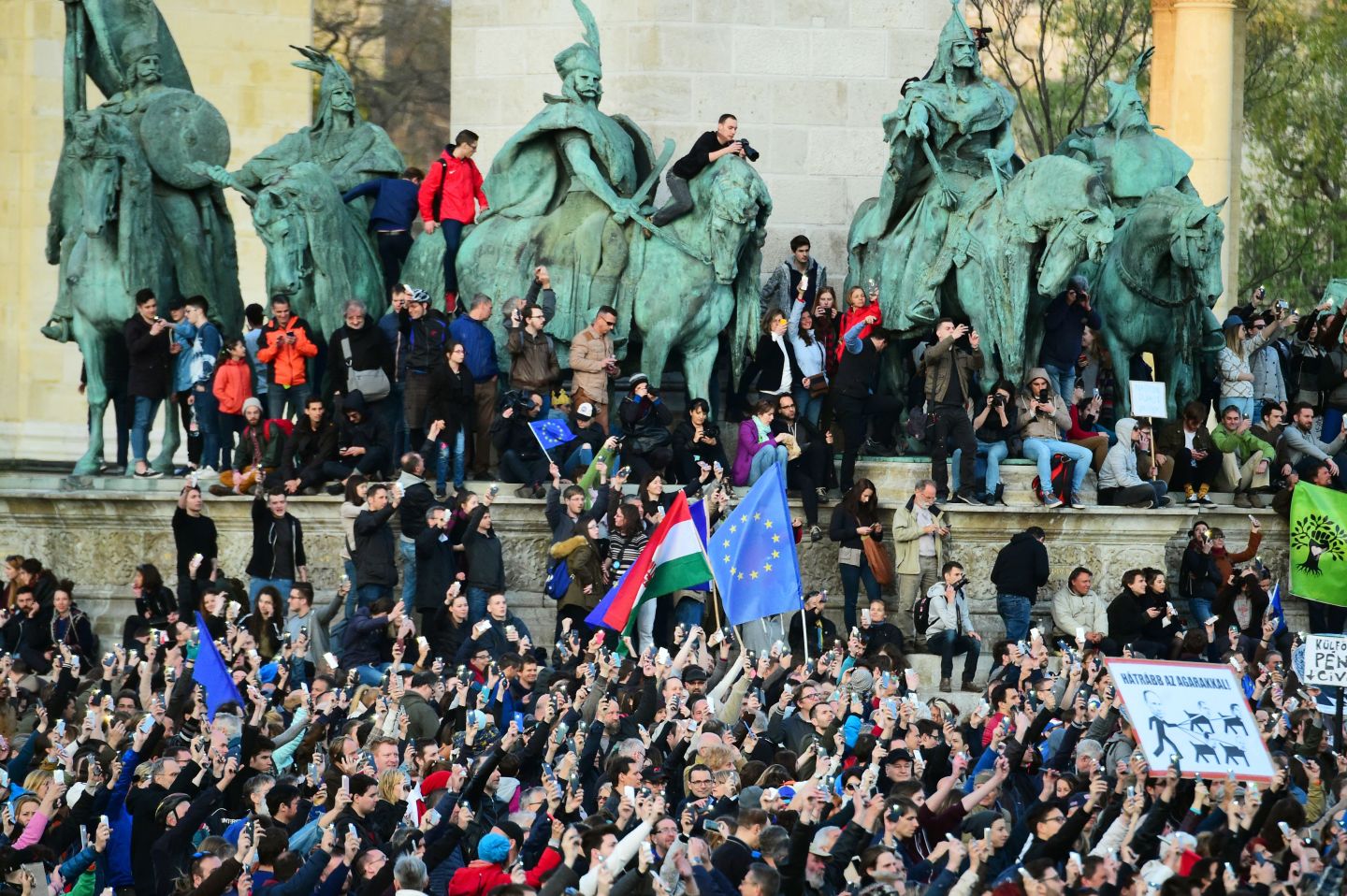 Thousands of participants protest with banners and lit mobile phones on Heroes' square on April 10, 2017 in Budapest during their demonstration against a new draft bill against the civic organization. The EU has expressed fears that Hungary is undermining academic freedom, non-government organisations and the rights of asylum seekers. / AFP PHOTO / ATTILA KISBENEDEK (Photo credit should read ATTILA KISBENEDEK/AFP/Getty Images)
ATTILA KISBENEDEK AFP/Getty Images

Thousands of Hungarians rallied in Budapest on Saturday against what they said were attempts by the rightwing government to silence critical voices, in the latest mass protest triggered by a new university law.

Prime Minister Viktor Orban’s government, which has been in power since 2010, has faced big protests in the past two weeks after it passed legislation that targets a top international university founded in Budapest by billionaire financier and philanthropist George Soros.

Orban said earlier on Saturday that the parliamentary elections next year would decide whether a government fighting for the national interest remained in power or forces serving foreign interests gained control.

Among the thousands of protesters gathered in Budapest at a peaceful rally on Saturday, some carried European Union flags and banners with messages such as “Viktor the game is over” and “I stand with CEU”.

“It is unbearable what is happening here, I would like to live in a democracy,” said Agnes Bojte, 40, who makes documentaries. “It is like the air is getting thinner and thinner in this country.”

“Media, civilians, students and Hungarian people cannot be silenced in their own country,” one of the speakers said.

The EU and the United States have sharply criticized the new legislation. Rights groups say it is part of a wider crackdown on dissent in Hungary, after curbs on the public media, state institutions and the constitutional court.

Orban, speaking for the first time since the protests began, told pro-government newspaper Magyar Idok that such conflicts were part of a fight for national sovereignty.

“In Hungary the national government is under continuous pressure and attacks so what is at stake at all elections is whether we will have a parliament and government serving the interests of Hungarian people or serving foreign interests,” he said.

He said what was happening in Hungary now was a rehearsal for the campaign for the vote in a year’s time. Recent polls give the ruling Fidesz party around 30% support and with that a firm lead over opposition parties.

“If we accepted that Brussels or other political or financial centres dictated … what should happen in our country we would not have conflicts,” he said in an interview. “But the history of Hungarians is that of a history of freedom fights.”

The European Commission—often at odds with Orban—has threatened Hungary with legal action over a series of measures including the education law, saying they ran counter to the EU’s values of human rights and democracy.

Analysts say Orban wants to solidify his nationalist-minded voter base ahead of the election.