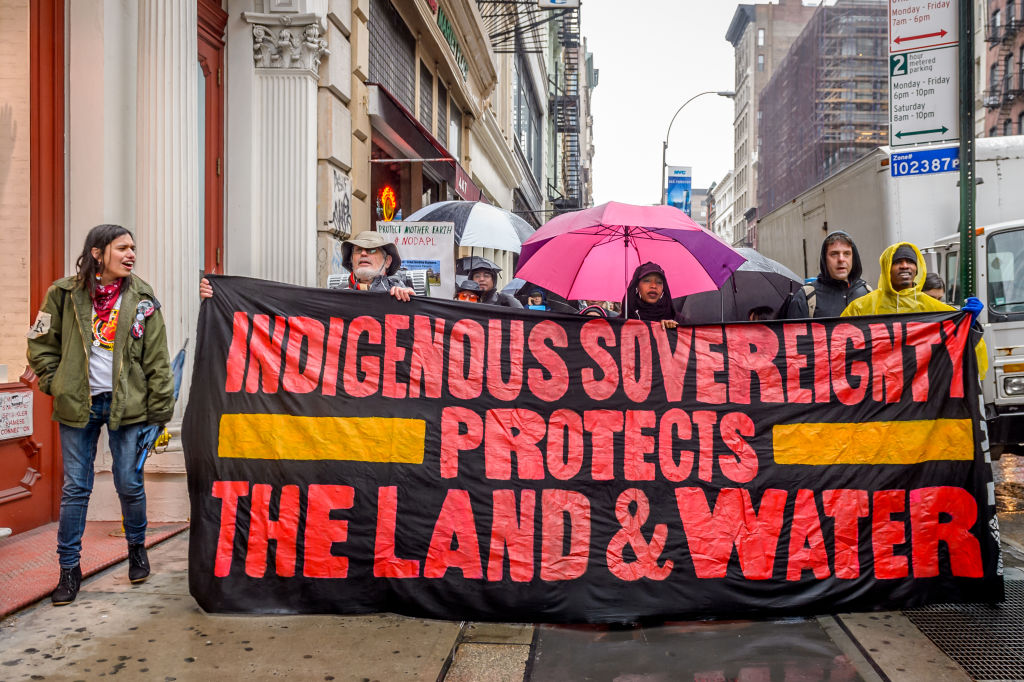 WELLS FARGO BRANCH SOHO/CITYHALL, NEW YORK, NY, UNITED STATES - 2017/04/06: The #NoDAPL encampment at Wells Fargo conducted a protest march to City Hall and then a rally. The protest march began at Wells Fargo at 463 Broadway at 9:30am and reached City Hall for a rally at the City Hall steps with womens rights leader and activist icon Gloria Steinem at 10:00am. The Indigenous leaders issued a moral call on the New York City Mayor Bill de Blasio, as well as the New York City Comptroller Stringer to end the citys business with and investments into Wall Street banks attacking Native Nations. (Photo by Erik McGregor/Pacific Press/LightRocket via Getty Images)
Erik McGregor—Pacific Press LightRocket/Getty Images

The controversial Dakota Access Pipeline will begin interstate crude oil delivery on May 14, according to a filing with the U.S. Federal Energy Regulatory Commission.

Energy Transfer Partners LC on Thursday filed what is known as a tariff, which lays out details about the line and the oil to be delivered.

The 1,172-mile (1,885-km) Dakota Access line runs from western North Dakota to Patoka, Illinois. The $3.8 billion project became a focus of international attention, drawing protesters from around the world, after a Native American tribe sued to block completion of the final link of the pipeline through a remote part of North Dakota.

The Standing Rock Sioux tribe said the pipeline would desecrate a sacred burial ground and that any oil leak would poison the tribe’s water supply.

Thousands of protesters demonstrated in North Dakota and Washington, D.C., many staying to support the tribe in a makeshift camp near the pipeline‘s construction site last fall. Many opponents also said reliance on the pipeline and the petroleum it was intended to carry would exacerbate climate change.

The outgoing administration of Democratic President Barack Obama said it would reconsider the permits issued for the pipeline‘s route near tribal lands, delaying the project by several months.

But that move was quickly reversed after the inauguration of Republican President Donald Trump in January.

For more on the Keystone and Dakota Access Pipelines, watch Fortune’s video:

Among Trump’s first acts in office was to sign an executive order that reversed a decision by the Obama administration to delay approval of the pipeline.