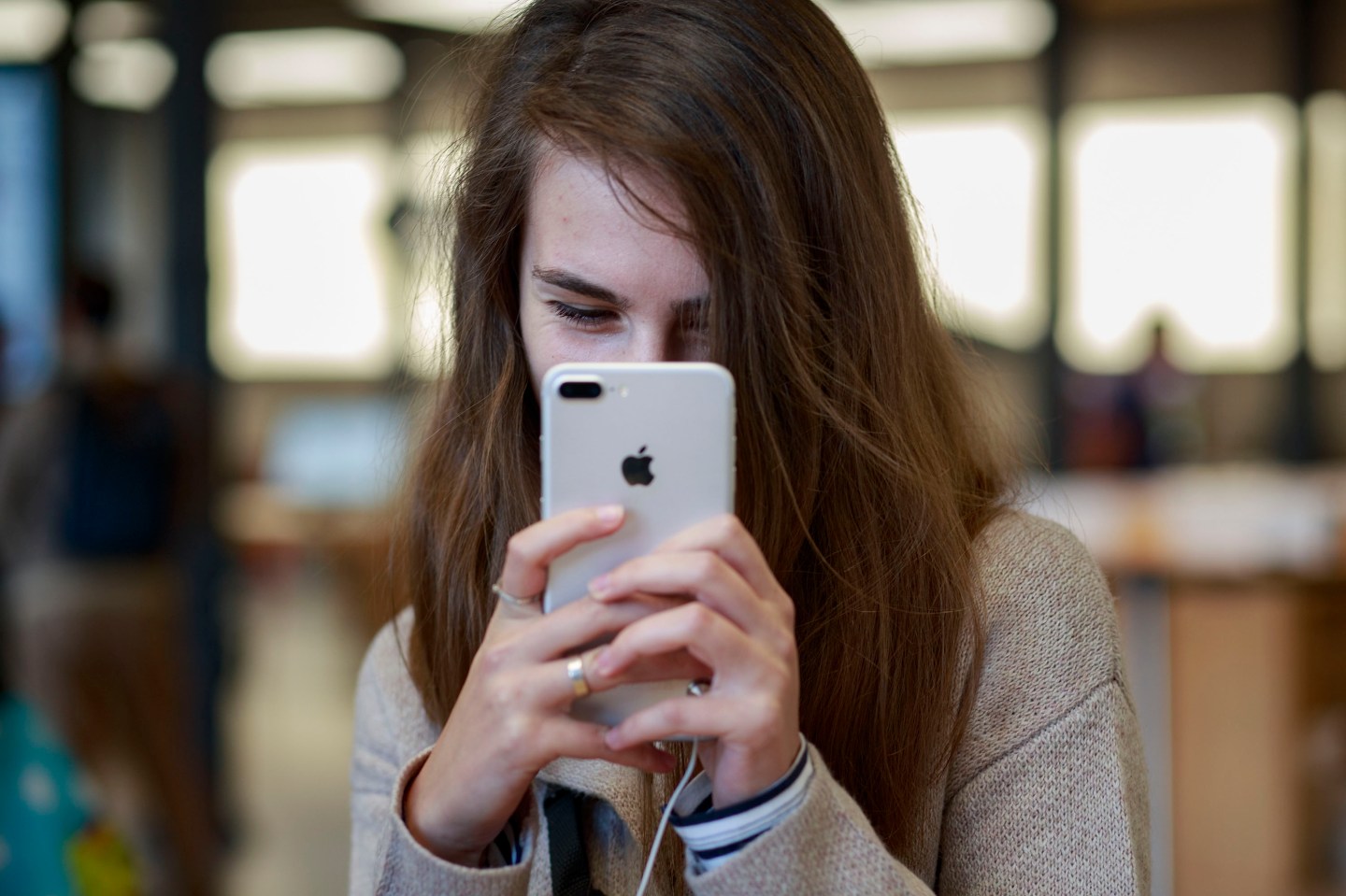 MADRID, SPAIN - SEPTEMBER, 16: A customer takes a selfie with a new Iphone 7 exhibited at Puerta del Sol Apple Store the day the company launches their Iphone 7 and 7 Plus on September 16, 2016 in Madrid, Spain. The iPhone 7 and iPhone 7 Plus has been launched on Friday September 16th in more than 25 countries. Customers have started to queue 38 hours before the opening of the store placed in the center of Madrid. (Photo by Gonzalo Arroyo Moreno/Getty Images)
Gonzalo Arroyo Moreno Getty Images

Apple has gradually improved the iPhone’s camera software over the years, most recently adding features like Portrait Mode, Live Photos, and slow-motion video recording. While those additions made it possible to capture new kinds of footage, Apple hasn’t done much to change what people can actually do with the footage they record. The Cupertino, Calif. firm is looking to change that with a new app called Clips, now available in the App Store.

Clips is a video editing tool designed to weave together photos and videos, all while letting users add elements like filters, emojis and text. Think of it like a cross between the iPhone’s Memories feature, which automatically generates montages from your photo library, and iMovie. While it’s not a fully-fledged video editing tool, Clips could be useful for making quick videos to share on Facebook (FB), Instagram or YouTube.

After opening Clips, the app prompts you to start a new video by holding down the record button. If you don’t want to record a new video or photo, you can also pull in existing content from your iPhone’s library.

Clips offers multiple effects you can add to individual photos and videos in your compilation. All the usual suspects are here: One such filter makes footage look like it’s from a comic book, while there’s another for black-and-white footage, and a third option brightens things up among other choices. Still, the filter selection is relatively small compared to that of apps like Instagram and Prisma.

To find Clips’ various features, you tap the corresponding button near the top of the screen. The interface is more intuitive than that of Snapchat, which hides its features behind swipes and taps. A star button pulls up a selection of emojis and banners, while the “T” key offers an array of posters, including options that say “Hello,” “Good Morning,” “Happy Birthday” and more.

In a nice twist from the norm, you can edit what these banners say. For instance, if you like the speech bubble sticker but want it to say something different, you can press down on it to add your own text. You can also access your full library of emoji in a similar way, since the Clips menu only displays your most frequently used icons. While I appreciate this level of customization, I wish it was easier to find — I didn’t realize you could add your own text to these banners until I tinkered around with the app for a while.

Apps like Snapchat (SNAP) and Instagram have already popularized the idea of sprinkling emoji, stickers, and text over photos. But Apple (AAPL) has a different approach for adding captions. Rather than just typing in subtitles, you can also choose to use the Live Titles feature, which adds text as you dictate it out loud and times its appearance to coincide with what’s happening on-screen. It’s clearly made for an era in which people often watch videos on their phone with the sound off. But since it’s primarily meant for voiceovers, it only worked when I used the front-facing camera, not the main one. That’s because only the microphone on the back of your iPhone is activated when recording with the rear camera, so you usually have to speak louder for it to pick anything up.

Once you’re done creating a video, tapping the share button pulls up options for importing the video to Google (GOOG) Drive, Instagram, and other apps. It also includes a row of suggested contacts, which Apple generates by looking at the people you’ve texted most recently, names mentioned in your video, or faces you’ve tagged in pictures stored in Apple’s Photos app.

Augmented Reality Will Be Apple’s Next Hit

Clips will likely please people who primarily use their iPhone for casual shooting. But it’s missing a couple of potentially helpful features. Other than posters, there’s no way to insert transitions like a fade or crossfade, common in even the simplest video editing apps. As a result, the final project can sometimes look choppy. And it doesn’t offer any virtual masks that add quirky effects to your face like those found on Snapchat. But it does help make vertically-shot photos and videos look flattering, since it has a square photo editor like Instagram.

All told, Clips is evidence that Apple doesn’t want to be left behind amid a rapid shift in mobile photography. Whereas smartphone cameras were once used to preserve memories, apps like Snapchat and Instagram are turning them into devices for instant communication. Clearly, Apple isn’t willing to completely cede that territory to third-party apps. While Apple is constantly improving the iPhone’s camera hardware and behind-the-scenes software, Clips is a rare evolution of its camera app — an evolution that reveals how it’s thinking about the future of photography with the iPhone, the world’s most commonly used camera.