Baby Boomers Are Causing A Debt Crisis. Here’s How They Can Navigate It 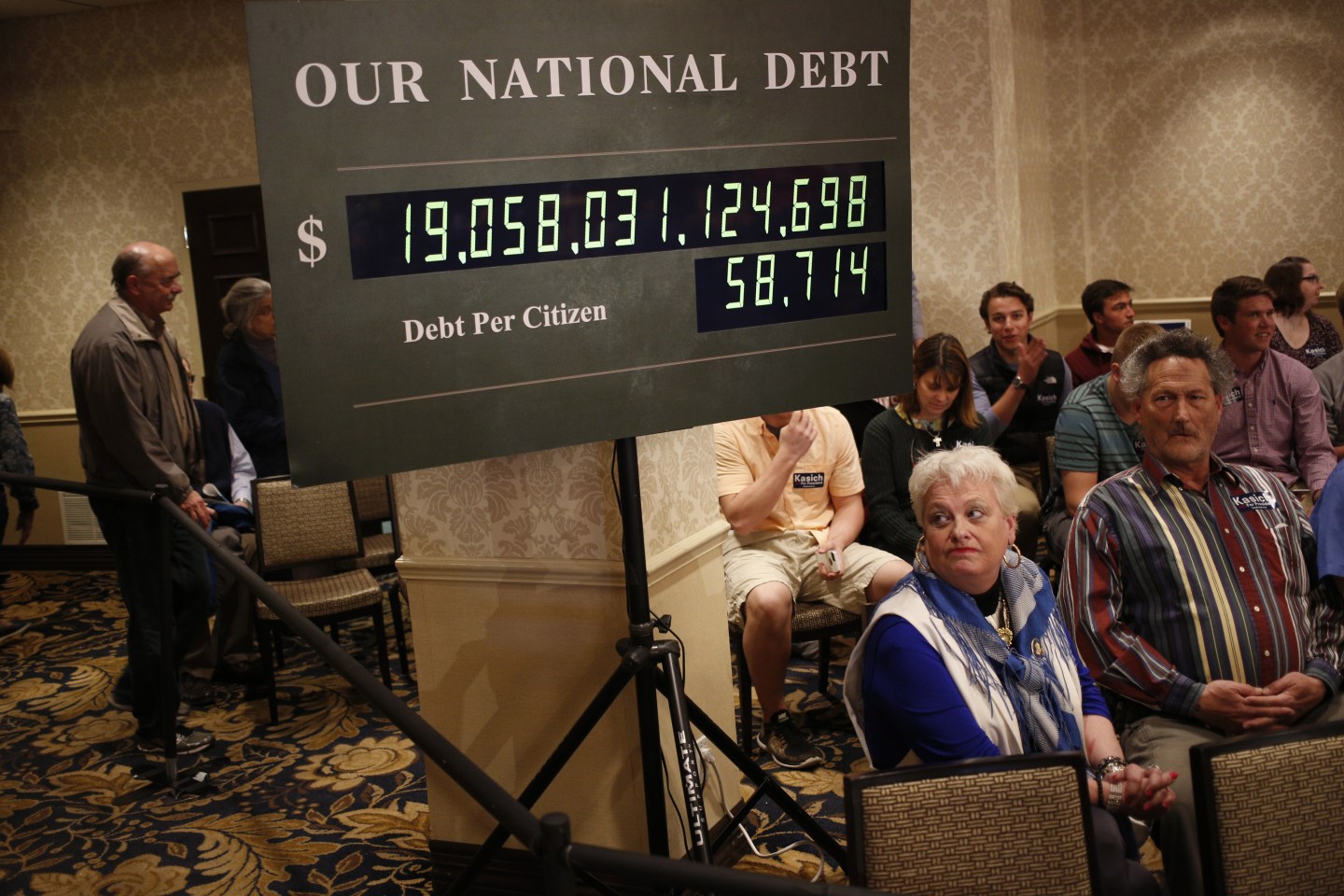 Attendees sit beneath a rendition of the U.S. national debt clock at an event for John Kasich, governor of Ohio and 2016 Republican presidential candidate, in Madison, Wisconsin, U.S., on Monday, March 28, 2016. Kasich would beat Democratic presidential front-runner Hillary Clinton in a national general-election matchup, according to a Bloomberg Politics poll conducted by Iowa-based Selzer & Co. Photographer: Luke Sharrett/Bloomberg via Getty Images
Luke Sharrett—Bloomberg via Getty Images

You may have missed it, but on Thursday a nonpartisan arm of Congress released a rather alarming report on the national debt crisis. And yes, the word “crisis” was invoked many times.

The takeaway? Government debt and deficits are going to explode over the next 30 years if current laws remain in place. The federal debt will reach 150% of gross domestic product by 2047, up from 77% today, the report by the Congressional Budget Office said.

If the projections come true, they raise the likelihood of a fiscal crisis, a situation in which investors become unwilling to finance government borrowing unless they are compensated with very high interest rates, the CBO warned. And conditions like those could have major implications for people who are saving for retirement today.

We’ve known the culprits behind the debt explosion all along: Social Security and Medicare, two programs President Trump pledged not to touch when he was on the campaign trail. Costs for those two mandatory spending programs are set to soar as more baby boomers retire, because that cohort represents such a large share of the U.S. population.

There are currently 2.8 workers for each Social Security beneficiary, down from 5.1 in 1960. And by 2047, more than a fifth of Americans will be age 65 or older, shifting the burden of funding these entitlement programs to an even smaller share of the population.

Meanwhile, as the government takes on more debt to fund its daily operations, the cost to service that debt will take up a larger chunk of government spending as well. By 2047, costs of servicing the debt are expected to total 6.2% of GDP, up from 1.4% this year.

If these projections come true, it will mean the government will have less wiggle room to fund all the other programs in the budget, including defense, infrastructure, education, environmental protections and other discretionary programs. The government would also have less ability to respond swiftly and strongly in the event of a shock to the financial system.

“When outstanding debt is large, the government has less flexibility to address financial and economic crises,” the CBO report said. “A large debt also can compromise a country’s national security by constraining military spending in times of international crisis or by limiting its ability to prepare for such a crisis.”

Trouble has been brewing

Of course, this problem is nothing new. Policymakers have been discussing the unsustainable financing of the entitlement programs since the 1970s.

But fixing the problem isn’t exactly politically popular. Most federal politicians don’t want to touch the issue, because the solutions would involve costly sacrifices on the part of their constituents, and powerful lobbying groups like AARP oppose any proposals that would reduce benefits.

Possible reforms could include raising the full retirement age for Social Security to 70 for workers who are currently under age 40; cutting benefits; increasing payroll taxes on workers; increasing Medicare premiums; and making Social Security benefits more progressive — meaning cutting benefits for high-income workers, while preserving payouts for low-income earners. Last year, the CBO published what it called “115 options for reducing the deficit,” and all of those painful suggestions were among them.

Financial advisors say workers who are already close to retirement probably will witness fewer dramatic changes to the structure of Social Security and Medicare than younger workers like millennials. That said, there could still be changes that impact boomers in some shape or form.

“There’s no way Social Security is going away altogether, it’s just going to get pushed back and benefits will be reduced,” said Eric Aanes, president and founder of Titus Wealth Management in Larkspur, Calif.

Saving for a less certain future

So how should savers prepare?

Mark Hamrick, senior economic analyst for Bankrate.com, urges savers to start by using retirement calculators to estimate just how much income they’ll need to live comfortably in retirement. Although these calculators are plentiful on the internet, only 4 in 10 workers report that they or their spouse have ever tried to estimate how much money they’ll need, a recent study by the Employee Benefit Research Institute found.

The next step is to do a “gut check,” Hamrick said, of the assumptions used in the calculations. An old rule of thumb was to think about replacing two-thirds to three-fourths of your previous income in retirement. For those boomers whose investments alone aren’t able to produce enough income to live comfortably, some may want to consider working longer or working part-time even after retirement, he said. (Even affluent boomers with a healthy amount saved may want to consider working longer, given recent research that correlates continued involvement in work with better health and a higher quality of life.)

Boomers may also want to rethink the traditional advice that has long encouraged retirees to reduce risk as they approach age 65. With life expectancies rising, and more people living until their 90s or even 100, it may be wise to hold on to a higher portion of high-yielding investments like stocks longer than previous generations did.

“People who live at least another few decades will likely be affected by diminished funding of Social Security, and also the economic impacts that impact the broader economy, including rising interest rates and inflation,” Hamrick said. “Do you really want to take a 2.5% annual return for 40 years, if you’re thinking about current bond yields?“

“I would recommend you look at the calculation and hope for the best – that you’ll receive your full benefit –but also plan for a potential reduction,” he said. “Without knowing what’s going to happen politically, it’s hard to know how much further it will get cut.”