Trump Turns to Campaign Rallies To Distract From Administrative Challenges 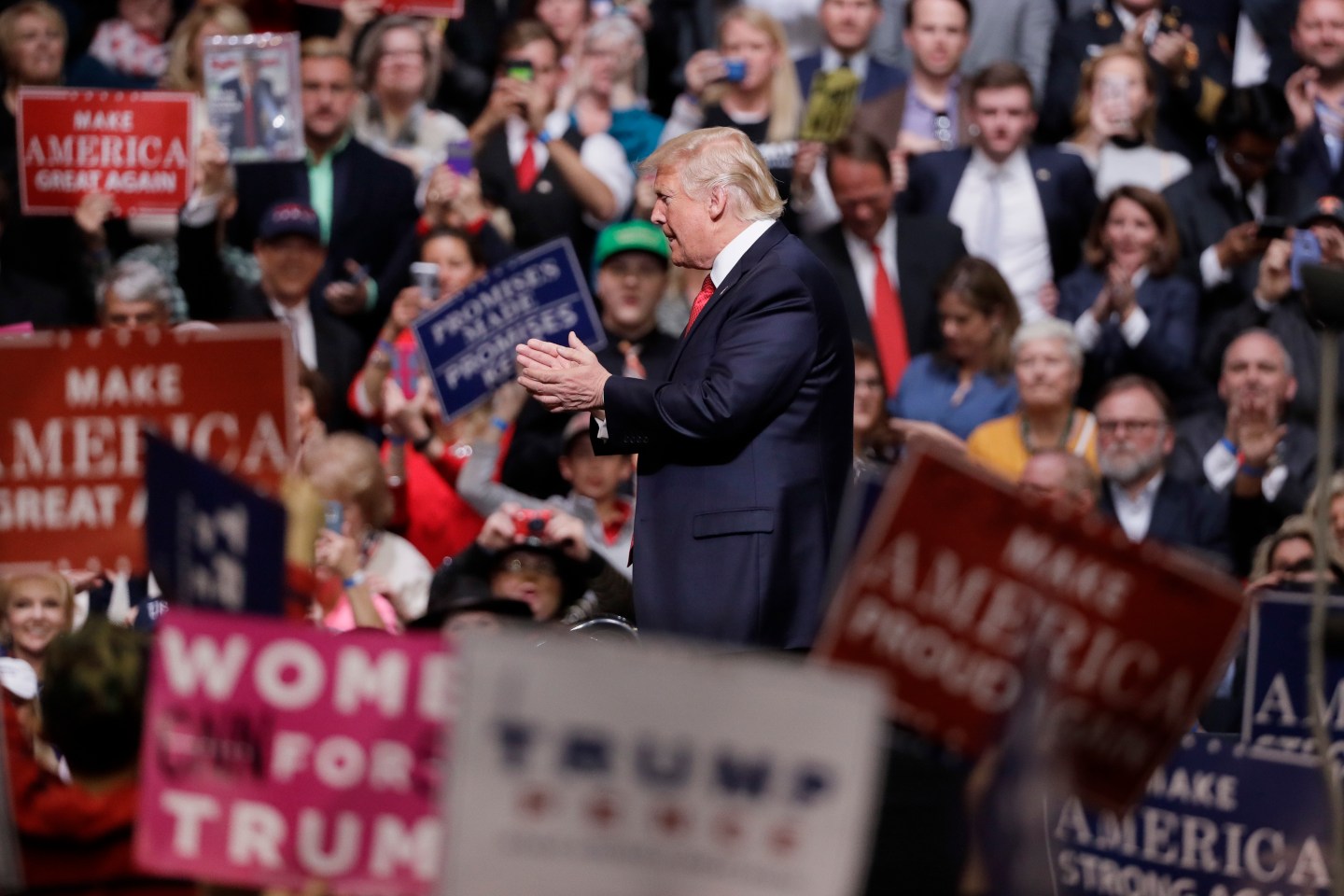 FILE - In this March 15, 2017 file photo, President Donald Trump speaks at a rally in Nashville, Tenn. Trump is taking his message directly to his ardent supporters. At a series of upcoming rallies, he’s working to recapture the enthusiasm of his campaign and reassure his supporters about his tumultuous early days in the White House. (AP Photo/Mark Humphrey, File)
Mark Humphrey AP

President Donald Trump is returning to the road, rallying supporters to recapture the enthusiasm of his campaign and reassuring them about his tumultuous early days in the White House.

It’s a welcome distraction for a president whose first months in office have been dominated by self-inflicted controversy and roadblocks, courtesy of federal courts and a divided Congress.

“We have done far more, I think maybe more than anybody’s done in this office in 50 days, that I can tell you,” Trump said to cheers from thousands of supporters at a campaign rally in Nashville, Tennessee.

In Trump’s rally telling, things in Washington are going great. He’s been cracking down on illegal immigration, is “way ahead of schedule” on his southern border wall and is on the verge of passing a new health care plan that “does so much for you.”

He railed against a federal judge for once again stymieing what he called a “watered-down version” of his travel ban an hour before he took the stage, but assured supporters he’d take the case to the Supreme Court and win. The crowd roared.

On the trip back to Washington that night, Trump bounded back to the press section of Air Force One to share his excitement.

He said he plans to continue the events, holding rallies every two weeks.

Throughout the campaign, Trump relied on his rallies to speak directly to his supporters. Networks often carried the events live, giving Trump what were essentially free 50-minute infomercials watched by millions.

The events also energized Trump, who thrives on the rush of performing to adoring crowds.

President Trump Wants to Revitalize Infrastructure. But His Budget Could Make It Worse

On Wednesday night, he seemed transported back to the campaign — a time of promise and fewer responsibilities. The event had all the trappings of his rallies of old: the eclectic soundtrack, the chants of “Lock her up,” aimed at former rival Hillary Clinton, who has long since faded from the headlines.

“There’s no place I’d rather be than with you here tonight, with the hard-working citizens of our country,” he told the crowd.

He’d spoken earlier to an enthusiastic audience of auto workers at a rally not far from Detroit, and passed by throngs of people lining the streets as he drove through Nashville. He’ll be in Louisville, Kentucky, for another rally Monday night.

“It’s good for all of us to get out of the bubble and remind ourselves it’s a huge country out there, and it’s filled with people who support the president and are rooting for his success,” said Kellyanne Conway, a top Trump aide.

Conway said the rally stage has “always been a natural habitat” for Trump, giving him a platform to take his case directly to his people. “That’s always been where he’s most comfortable,” she said.

The distraction is especially important for a president whose anger can lead to tweets — and self-inflicted political wounds. The ramp-up comes as staffers have worked to keep Trump away from critical television programs that work him up.

The events are run by Trump’s campaign committee, which maintains an active operation. Executive director Michael Glassner said that Trump’s rise was driven by his ability to draw consistently large crowds.

“If your candidate — and now your president — has the ability, and his supporters have the desire and the drive to see him in the way that you can stage events like this, why would you stop?” he asked. “It energizes the president, it energizes the supporters.”

So far, the locations have raised some eyebrows. The decision to visit Louisville, Kentucky, appears part of an effort to pressure state lawmakers, including U.S. Sen. Rand Paul, to support the GOP health plan. But some feel he’d be better served spending time in the districts of vulnerable Democrats or Republicans at risk of someone running against them in a primary.

Conway disagreed: “Nobody’s thinking about political campaigns,” she said, noting that Tennessee was a state where consumers have few health care exchange options.

Trump’s supporters appreciate the visits nonetheless, and thousands waited for hours Wednesday in a line that stretched more than a mile.

Many say they remain true believers and think the president is delivering on his campaign promises, including getting tough on illegal immigration, saving American jobs and repealing and replacing “Obamacare.” The rallies, they say, are a way for Trump to talk over a mainstream media that many view with disdain.

“What he’s doing is he’s going directly to the people,” said Jim DeVellier, a 68-year-old pathologist from Roxboro, North Carolina. DeVellier says Trump is doing “an outstanding job” and fulfilling campaign promises, including nominating a conservative to sit on the U.S. Supreme Court.

“It’s as if he made a checklist of items for the people of the United States, and he’s going down that checklist of his promises and he’s saying, ‘Ok, I’ve done this. I’m working on this, and how’s this going?’ And I appreciate that,” he said.

Edward Dice, a disabled veteran, said he drove his 11-year-old daughter down from Belchertown, Massachusetts, more than 1,000 miles away, because he wanted her to see something historic.

“No other president does something like this,” said Dice, who is 46 and served in the first Iraq war.

Lisa Richardson, a 50-year-old Trump backer who works for a school system in Carthage, Tennessee, stood for hours in the cold for a chance to see Trump in Nashville. She still stands fully behind him.