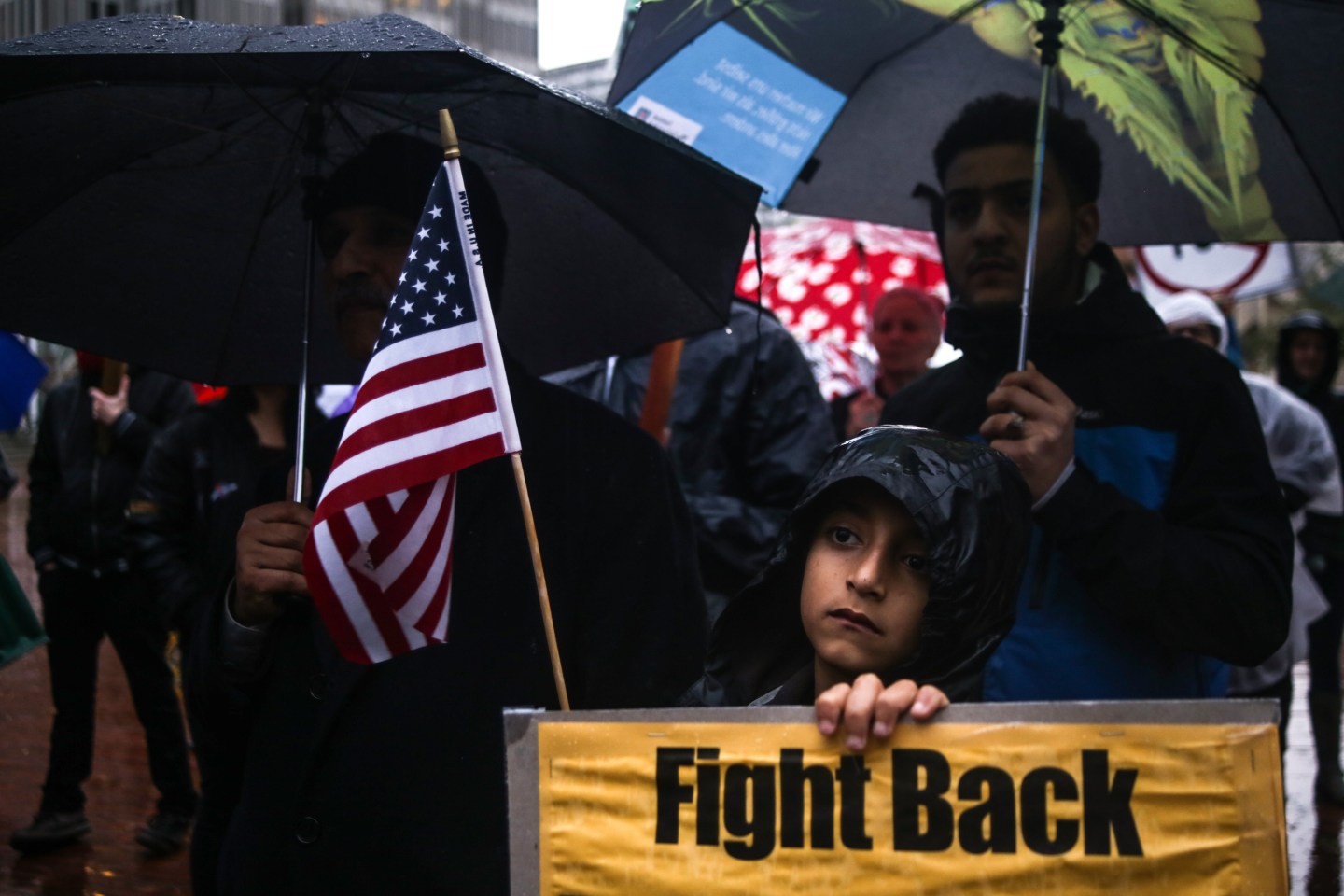 Jermaine Anderson keeps going back to the same memory of Donald Trump, then a candidate for president of the United States, referring to some Mexican immigrants as rapists and murderers.

“You can’t be saying that (if) you’re the president,” says Anderson, a 21-year-old student from Coconut Creek, Florida.

That Trump is undeniably the nation’s 45th president doesn’t sit easily with young Americans like Anderson who are the nation’s increasingly diverse electorate of the future, according to a new poll. A majority of young adults — 57% — see Trump’s presidency as illegitimate, including about three-quarters of blacks and large majorities of Latinos and Asians, the GenForward poll found.

GenForward is a poll of adults age 18 to 30 conducted by the Black Youth Project at the University of Chicago with The Associated Press-NORC Center for Public Affairs Research.

A slim majority of young whites in the poll, 53%, consider Trump a legitimate president, but even among that group 55 percent disapprove of the job he’s doing, according to the survey.

“That’s who we voted for. And obviously America wanted him more than Hillary Clinton,” said Rebecca Gallardo, a 30-year-old nursing student from Kansas City, Missouri, who voted for Trump.

Trump’s legitimacy as president was questioned earlier this year by Rep. John Lewis, D-Ga.: “I think the Russians participated in helping this man get elected. And they helped destroy the candidacy of Hillary Clinton.”

Trump routinely denies that and says he captured the presidency in large part by winning states such as Michigan and Wisconsin that Clinton may have taken for granted.

Overall, just 22% of young adults approve of the job he is doing as president, while 62 percent disapprove.

Trump’s rhetoric as a candidate and his presidential decisions have done much to keep the question of who belongs in America atop the news, though he’s struggling to accomplish some key goals. Powered by supporters chanting, “build the wall,” Trump has vowed to erect a barrier along the southern U.S. border and make Mexico pay for it — which Mexico refuses to do. Federal judges in three states have blocked Trump’s executive orders to ban travel to the U.S. from seven — then six — majority-Muslim nations.

In Honolulu, U.S. District Judge Derrick Watson this week cited “significant and unrebutted evidence of religious animus” behind the travel ban, citing Trump’s own words calling for “a complete shutdown of Muslims entering the United States.”

And yes, Trump did say in his campaign announcement speech on June 6, 2015: “When Mexico sends its people, they’re not sending their best…They’re bringing drugs. They’re bringing crime. They’re rapists. And some, I assume, are good people.” He went farther in subsequent statements, later telling CNN: “Some are good and some are rapists and some are killers.”

It’s extraordinary rhetoric for the leader of a country where by around 2020, half of the nation’s children will be part of a minority race or ethnic group, the Census Bureau projects. Non-Hispanic whites are expected to be a minority by 2044.

Of all of Trump’s tweets and rhetoric, the statements about Mexicans are the ones to which Anderson returns. He says Trump’s business background on paper is impressive enough to qualify him for the presidency. But he suggests that’s different than Trump earning legitimacy as president.

“I’m thinking, he’s saying that most of the people in the world who are raping and killing people are the immigrants. That’s not true,” said Anderson, whose parents are from Jamaica.

Millennials Are Not Being Rewarded for Job Loyalty

Megan Desrochers, a 21-year-old student from Lansing, Michigan, says her sense of Trump’s illegitimacy is more about why he was elected.

“I just think it was kind of a situation where he was voted in based on his celebrity status verses his ethics,” she said, adding that she is not necessarily against Trump’s immigration policies.

The poll participants said in interviews that they don’t necessarily vote for one party’s candidates over another’s, a prominent tendency among young Americans, experts say. And in the survey, neither party fares especially strongly.

Just a quarter of young Americans have a favorable view of the Republican Party, and 6 in 10 have an unfavorable view. Majorities of young people across racial and ethnic lines hold negative views of the GOP.

Views of the Democratic Party are most favorable among young people of color. Roughly 6 in 10 blacks, Asians and Latinos hold positive views of the party. Young whites are somewhat more likely to have unfavorable than favorable views, 47 percent to 39 percent.

As for Trump, 8 in 10 young people think he is doing poorly in terms of the policies he’s put forward and 7 in 10 have negative views of his presidential demeanor.

“I do not like him as a person,” says Gallardo of Trump. She nonetheless voted for Trump because she didn’t trust Clinton. “I felt like there wasn’t much choice.”

Liberals Are Taking Aim At Their Own Party Post-Election

The poll of 1,833 adults age 18-30 was conducted Feb. 16 through March 6 using a sample drawn from the probability-based GenForward panel, which is designed to be representative of the U.S. young adult population. The margin of sampling error for all respondents is plus or minus 4 percentage points.

The survey was paid for by the Black Youth Project at the University of Chicago, using grants from the John D. and Catherine T. MacArthur Foundation and the Ford Foundation.