World CO2 Emissions Stalled Last Year — Thanks to the U.S. 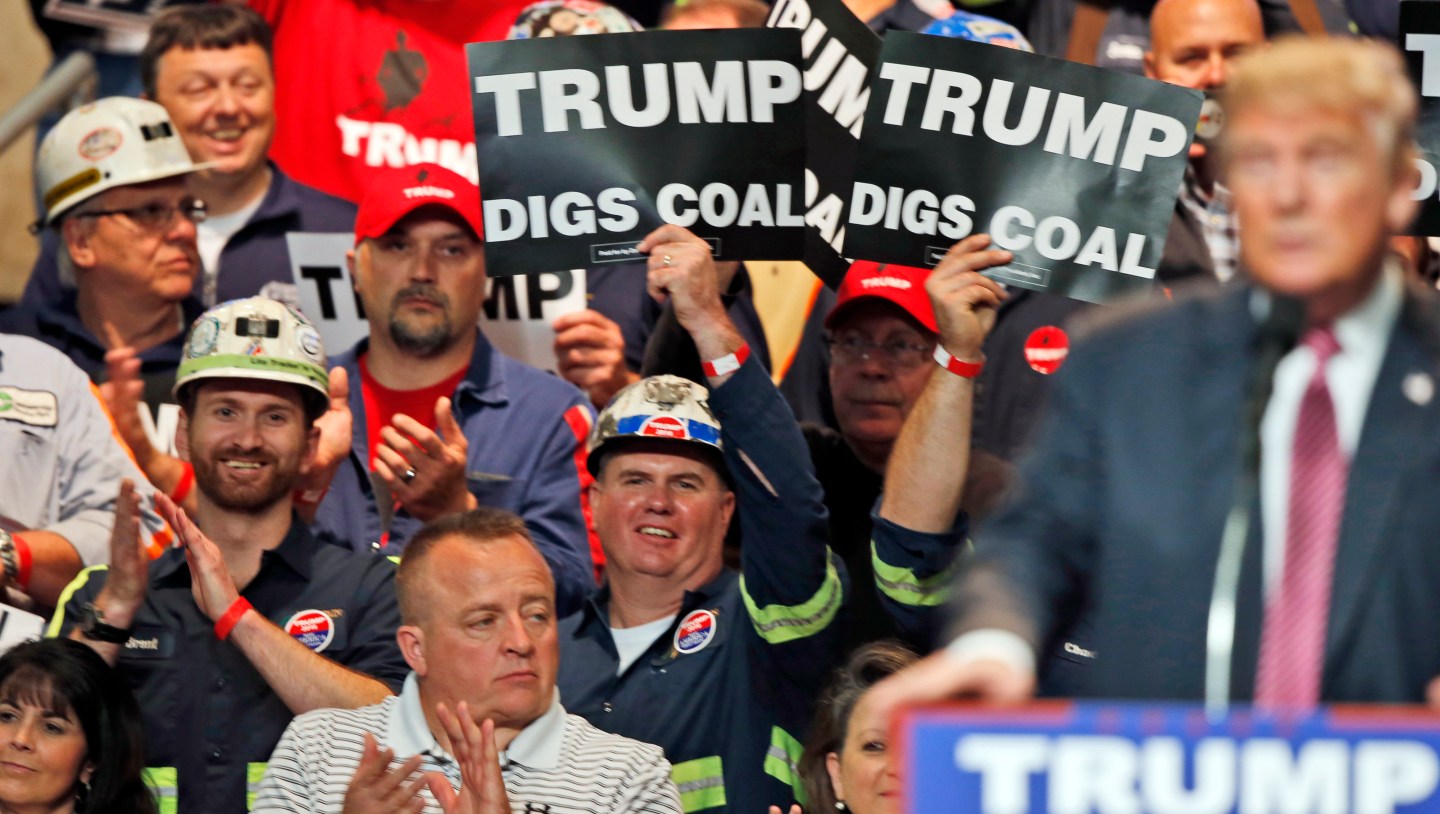 FILE- In this May 5, 2016 photo, Coal miners wave signs as Republican presidential candidate Donald Trump speaks during a rally in Charleston, W.Va. Trump's election could signal the end of many of President Barack Obama's signature environmental initiatives. Trump has said he loathes regulation and wants to use more coal and expand offshore drilling and hydraulic fracturing. (AP Photo/Steve Helber, File)
Steve Helber—AP

The U.S. could be giving up on tackling climate change just as it starts to have a real impact on greenhouse gas emissions.

As the administration of President Donald Trump gets ready to scrap many of the rules introduced by Barack Obama that pushed the country towards adopting cleaner energy, the Paris-based International Energy Agency published data showing that Obama’s policies – helped by market forces – had a drastic impact on U.S. emissions of carbon dioxide last year – so large, in fact, that they stopped CO2 global emissions rising.

The IEA said in a report published Friday that global CO2 emissions from the energy sector were flat for the third straight year in 2016, thanks in large measure to an 11% drop in coal demand at U.S. power stations. That’s because new power stations fueled by dirt-cheap shale gas have been replacing aging coal-fired ones in recent years. For the first time ever in 2016, they generated more electricity last year than coal-fired plants.

Trump’s promise to revive the coal industry helped him sweep Midwestern states where the decline of the industry has left high unemployment and resentment of coastal elites. And he has already killed an Obama-era rule that would have stopped companies from dumping mine waste in streams. But it’s unclear how much further he’s willing to rewrite the U.S. energy market’s rules to support coal.

The ‘stream protection rule’ itself is little more than a footnote to the industry’s problems. Research by Cambridge, Mass.-based Industrial Economics for the federal government showed that it would have a minimal short-term impact on jobs in the short term and none at all in the long run (see the chart below).

The truth is that any effort to defend jobs in the coal sector will only stop jobs being created in other areas of the energy complex with more of a future. According to figures from the Energy Department, only 86,035 Americans were employed last year in mining coal and turning it into electricity. For comparison, employment in the solar industry rose 25% to 370,000, while the wind-energy workforce rose 32% to 101,738. Even if those figures are inflated by various state-level subsidy programs, the trend is clear: renewables is where the jobs are.

And to make matters worse for the coal sector, Trump committed himself equally to promoting the very shale industry that has been putting it out of business, having said on inauguration day in his ‘America First Energy Plan’ that “the Trump Administration will embrace the shale oil and gas revolution to bring jobs and prosperity to millions of Americans.”

The Energy Information Administration in Washington expects coal output to rebound by 4% this year, as rising gas prices will improve coal’s competitive position. But by 2018, it expects coal’s share of the fuel mix to fall back to 30%, where it was in 2016.

As such, the EIA expects the fall in U.S. CO2 emissions to slow to 0.2% this year (although the warm winter may lead to a somewhat bigger drop).

More broadly, the IEA also pointed out Friday that China’s emissions only grew by 1% last year, despite electricity demand rising 5.4%. Beijing, too, is investing more in renewable energy sources ($360 billion between 2016-2020 alone). Although China has signed up to the Paris accord on Climate Change, which aims to stop global temperatures rising by more than 2º Celsius from pre-industrial levels, its primary concern is with cutting pollution, which has reached crisis levels in many of its cities.