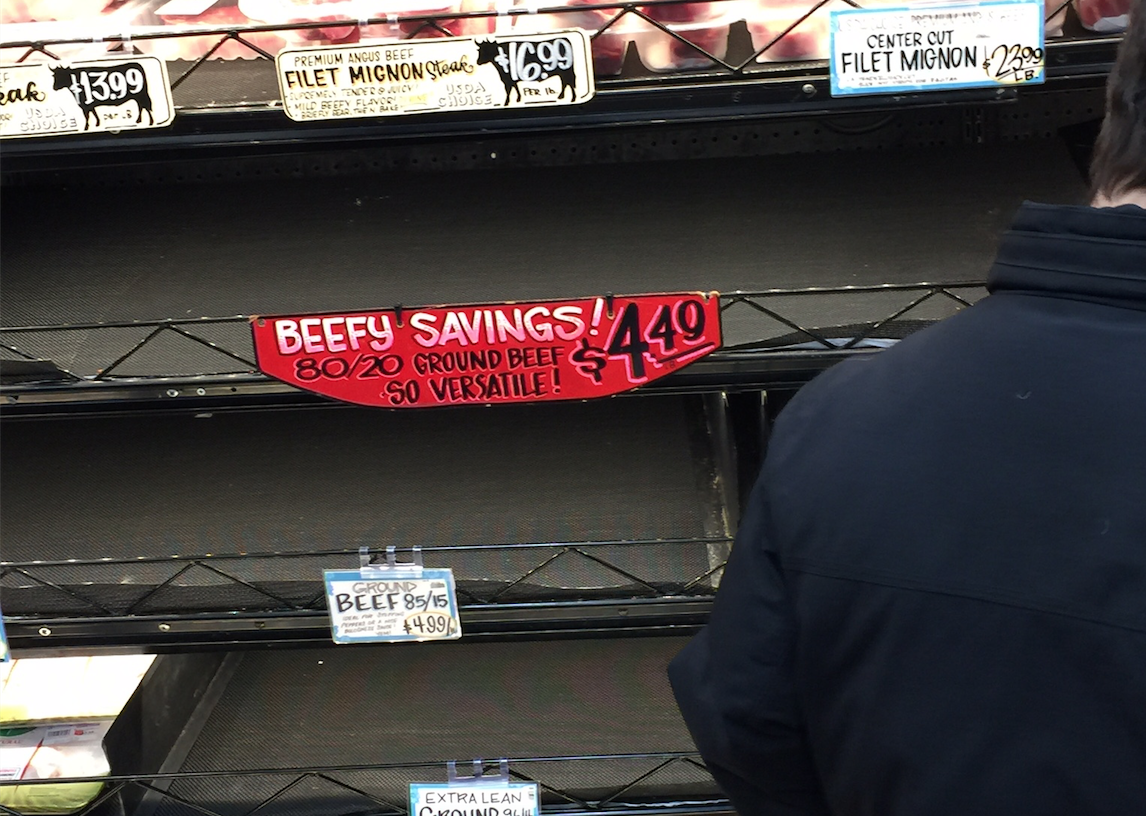 You would think grocers would have seen this coming. With Winter Storm Stella, the giant blizzard set to sock the Northeast with brutal winds and up to two feet of snow, it’s been the same old story: frantic shoppers rushing to stock up on supplies, leaving store shelves picked clean and a feeling of frenzy in the aisles.

How bad did it get? In the case of a Trader Joe’s in Brooklyn, the line to get into the store stretched for an entire block in the early evening. Yes, it’s New York, but this isn’t a trendy club or gallery—it’s the local grocery store. In the freezing cold.

Here’s the line shortly after 7 pm local time on Monday, more than five hours before storm Stella was due to hit.

According to a store employee, the line was like that most of the day. Several hours later, I ventured inside to see the scene, and it looked much as you’d expect. I’ve seen better selections at a state-run grocery store in communist Cuba.

Here’s what was available at the egg fridge this Monday night:

And as you can see, the bread selection wasn’t much better:

This is perhaps not a huge surprise. If you’re the sort of person who really likes to stock up before a blizzard, it makes sense to grab staples like bread and eggs. What was stranger to me was the state of the onion supply:

I mean, who decides to stock up on onions for a storm?

As food hoarding seems to take over every time there is a major storm, I decided to ask a store employee if there was any sort of pattern to the scramble. He replied that, in his experience, the first three things to go are bread, water, and peanut butter.

In this case, Trader Joe’s surprisingly still had a few jars of the latter:

Some also took to Twitter to express their disbelief:

Via colleague, the line to get into Trader Joes in Brooklyn. It should definitely be legal to rob these people & they should maybe be jailed pic.twitter.com/sYEbdp2fCd

Line halfway around the block just to get into Trader Joe's. I don't think so. 🍶🍞😝 #traderjoes #snow #blizzard2017 #blizzard pic.twitter.com/2dGEiRiXfs

Line to get into Trader Joes in Brooklyn right now #blizzard2017 pic.twitter.com/NMO6rGhqkn

But the chaotic scenes on Monday also raise a business question: Can grocery stores do a better job of predicting these sorts of situations? Is there a reason, as shoppers often complain, that they don’t decide to add extra stock (and make extra money)? A spokesperson for Trader Joe’s did not reply to an after-hours request for comment.

As of midnight Tuesday, the storm had yet to hit New York City, though weather outlets predict it could deliver 1-4 inches of snow throughout the course of the day.