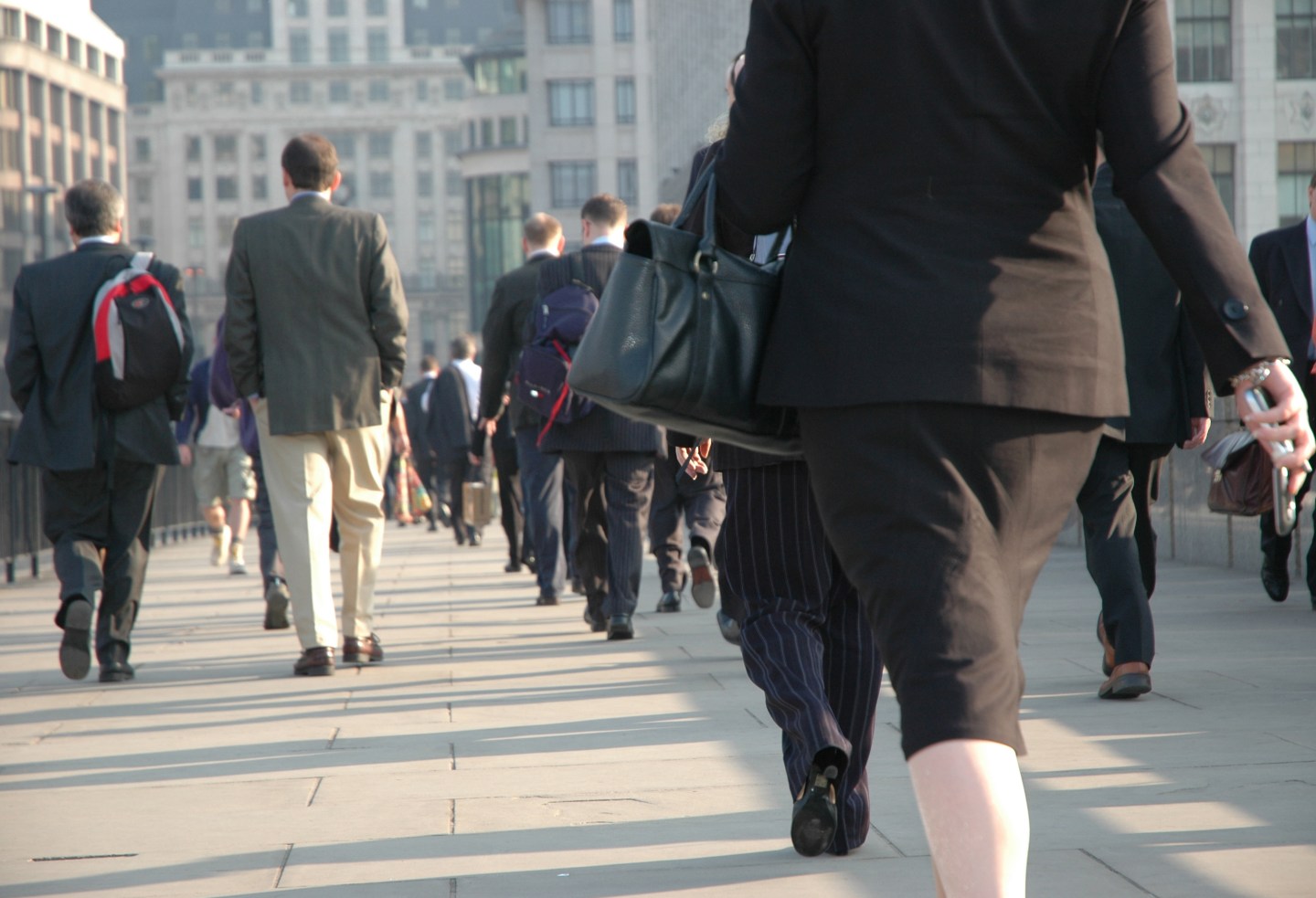 Female worker in group of men arriving for work walking across London Bridge towards the financial district of the City of London, early morning, May 2006
ptpx—iStockphoto/Getty Images

Another day, another high-profile case of sexism at a major company. Late last month, former Tesla (TSLA) engineer AJ Vandermeyden spoke to The Guardian about a lawsuit she filed last year against the company, citing sexual harassment and pay discrimination.

She still works at Tesla, according to The Guardian, but now in the company’s purchasing department, a non-engineering role where hopefully she is finding less hostility. But Vandermeyden’s story shows why there are still so few women in tech today, and echoes the challenges the women who are in tech (and other male-dominated industries) still face.

Despite progress, the U.S. labor market continues to be segregated by gender, one of the most significant factors contributing to the gender wage gap. The majority of women work in jobs primarily done by other women, such as nursing, and an even larger share of men work in jobs primarily done by other men, such as engineering. And, female-dominated jobs tend to pay much less, often despite similar skill requirements, than male-dominated ones. In fact, renowned economists Francine Blau and Lawrence Kahn estimate that about half of the overall gender wage gap in the economy is due to job segregation: Women make 80 cents for every dollar earned by a man, but of the 20 percentage points that stand between women and equal pay, about 10 percentage points are due to this segregation in the labor market (the rest of the gap is due to a combination of factors like education, time in the workforce, and yes, discrimination).

A woman looking for higher earnings can surely enter a male-dominated field, and many have done so. But pervasive harassment, non-transparent salary and promotion policies, and company cultures unwilling to address these problems often push women back into lower-paying, gender-integrated, or female-dominated jobs. And for young women considering engineering careers, they’re not immune to stories about discrimination and harassment. Just as Vandermeyden moved positions, they may well choose to take their skills and talents elsewhere, but that decision can hardly be viewed as voluntary.

If we want to narrow the wage gap, which has been stuck in roughly the same spot for more than a decade, according to the U.S. Census Bureau, we need many more women to enter male-dominated fields and receive equal pay for equal work (not to mention raising pay in women’s jobs).

There could be a number of reasons for paying a man and a woman differently in the same job, some of them perfectly reasonable, including differences in educational background or seniority. Some are understandable, such as setting pay based on salary history, but nonetheless have discrimination baked into them. The wage gap grows as women advance in their careers because starting inequities are amplified each year through salary increases, promotions, and bonuses, all of which are generally pegged to current salary.

Fortunately, some high-tech companies are taking the lead, voluntarily revealing the gender or racial composition of their workforce (like Facebook (FB) and Google (GOOG)), conducting internal pay audits (like Pinterest and Redfin), and spending money to bring women’s pay up (Salesforce (CRM) and Intel (INTC)).

Research from the Institute for Women’s Policy Research points to some lessons tech companies can learn before they ever reach the courtroom. Basic and relatively easy company practices that improve pay and promotion outcomes, such as posting all job openings, using panels (rather than a single supervisor) to determine pay increases and promotions, and making expectations for jobs clear and transparent to all are a great first step.

In IWPR’s review of injunctive (that is, not financial) relief in over 500 court-supervised employment discrimination settlements in class-action claims, we found one settlement, at Boeing (BA), that showed how a set of seemingly neutral pay policies led to a persistent wage gap that grew with seniority. Before the suit, Boeing based its wages for new hires on a percentage increase from their previous salary, a practice that can import a history of unequal pay. Compounding the problem, annual salary and performance increases were also based on a percentage of the current salary. Following the settlement, Boeing implemented a set of policies designed to eliminate pay discrimination, organized around one important principle: that there needs to be accountability and transparency about the consequences of decisions relating to gender equality.

For companies that might not be inclined to voluntarily conduct pay audits or cease using current salary as a guideline for new hires, salary increases, and promotion increases, advocates for equal pay have had some success in getting state legislatures or city governments to pass legislation or other policies that do not allow employers to ask prospective employees about their current salaries. Massachusetts was the first to pass such a law in 2016. Philadelphia and New York City have followed suit, with several others considering similar legislation.

While such requirements will help achieve equal pay, they alone cannot solve the problem. Continued vigilance by employers, new lawsuits by courageous women like Vandermeyden, and continued enforcement of equal pay laws by all levels of government will help reduce pay discrimination. Women making career decisions should also become better informed about their likely future pay prospects. Employers should pay particular attention to how they make hiring and pay decisions early in every employee’s career, as a lot of damage is done at the starting gate.

It is not only women and their families who pay a high price—in lost income and retirement benefits—for unequal pay. Not paying workers likely contributes to lower productivity on the job and it serves as a disincentive to women to better themselves through further training and education—why bother if there will be an unequal reward at the end? Despite this discouragement, women have been pursuing higher education at higher rates than men. Paying them fairly can be expected to increase performance at work and lead to greater innovation and productivity for the economy as a whole.

We all pay a high cost for the status quo.

Heidi Hartmann, Ph.D., is an economist, MacArthur Fellow, and president of the Institute for Women’s Policy Research, a nonprofit research institute in Washington, DC.