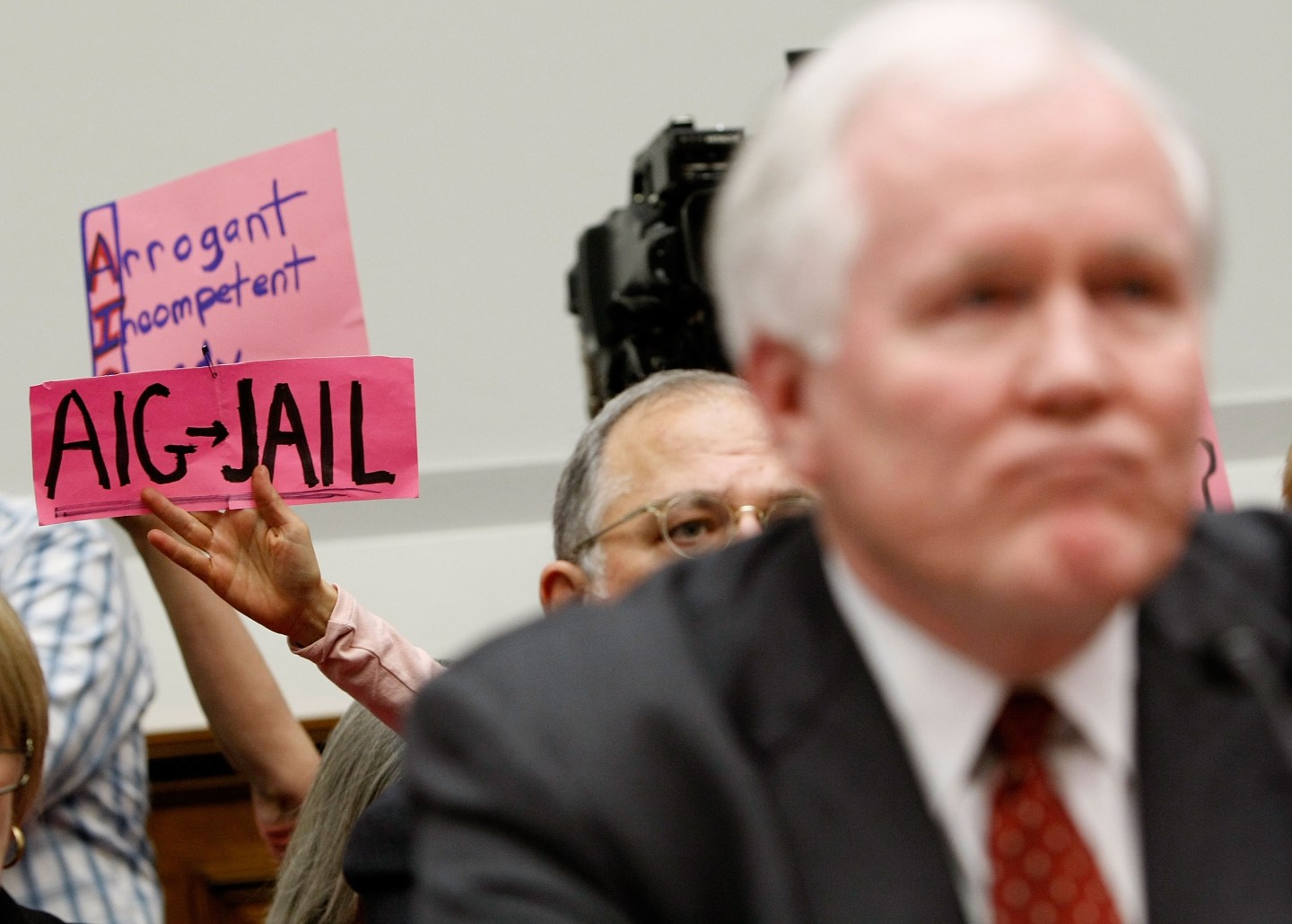 Here’s one thing that the departure of insurance giant AIG’s CEO Peter Hancock this week made official: The AIG (AIG) comeback plan that kept Carl Icahn and John Paulson at bay was a complete and utter failure.

Now, this dangerous duo of activists may renew their campaign to split the troubled insurance colossus, which played a staring role in nearly bringing down the economy during the financial crisis. It won’t be easy. AIG’s board vows to hold this old-fashioned, multi-line model together, portending the fiercest corporate battle of 2017. But it’s not clear what defenses they have left.

On March 9, AIG announced that CEO Peter Hancock was exiting just two-and-a-half years after he was tapped to lead an epic turnaround. (He reportedly quit during a board meeting in which the board was deciding whether he should stay.) The decision was so sudden that AIG’s board had no new leader ready to go, and the company stated in a press release that a search is starting now; Hancock will remain as CEO until a successor is named. In a statement, Hancock declared that he couldn’t continue “without the wholehearted shareholder support.” Icahn was clearly one of the shareholders who wanted Hancock gone, declaring in a tweet, “We fully support the actions taken today by the board of AIG.”

The trigger was sharply disappointing fourth quarter earnings, unveiled on February 4. AIG suffered a much bigger than expected loss of $3 billion, driven by a gigantic, $5.6 billion addition to reserves for future losses. Its stock dropped 9% on the news, the largest one-day decline since 2011, erasing $6 billion in market cap. The backsliding epitomized AIG’s struggles to regain the its robust stature and profitability before the financial crisis, when an $185 billion federal bailout––since repaid in full––saved the insurer from bankruptcy. Since its glory days in the early 2000s, the house that Hank Greenberg built has seen its value drop from $240 billion to $66 billion, a loss of $174 billion, equal to the current market cap of Citigroup.

The comeback plan failed, despite what the board says.

In late 2015, Icahn and Paulson demanded that AIG split into three companies. Icahn also pushed for Hancock’s resignation. But Hancock and the board forestalled a proxy battle by reaching an accord in January of 2016. As part of the deal, AIG invited Paulson and an Icahn representative to join the board. It also developed a recovery plan designed to bring AIG in line with its best-performing peers by the close of 2017. The centerpiece was a campaign to substantially lower losses on its problem business, the commercial, or property and casualty division. The target was dropping the “loss ratio”—the share of claims paid to premiums—by six points in two years.

But in early 2016, AIG disclosed that its loss ratio was substantially worse than it originally estimated. Since starting point was higher than advertised, the improvements fell far short of projections. According to the plan, progress in P&C was supposed to lift AIG’s flagging ROE to as high as 8.9% in 2016, and 9% in 2017. Icahn remarked that those goals were less than challenging. On Feb. 4, though, AIG disclosed that in fact its normalized ROE for the last three months of 2016 only reached 4.8%. It was a higher, but still disappointing, 7.5% for the year.

The damage was supposed to be old, but it was recent.

In the fourth quarter of 2015, AIG announced an addition of $3.6 billion in reserves for its commercial division, which covers trucking and commercial delivery vehicles; medical malpractice coverage; workers’ comp; damage to factories and office buildings; and directors and officers policies. “The idea was that they’d reset their reserves at the correct, conservative level using the right metrics,” says Charles Sebaski, an analyst with BMO Capital Markets.

The optimistic view held that the big reserves booked in 2015 mainly covered underpriced policies issued during the financial crisis, when AIG was struggling for survival. But the the gigantic, $5.6 billion addition to reserves a year later revealed two major weaknesses. First, AIG was acknowledging that its metrics for forecasting losses were faulty not once, but twice. “They redid the actuarial assumptions that led to the big extra reserves in 2015. Then they did it again a year later in the fourth quarter of 2016,” says Sebaski. “They made the same claim that they’d switched to the right metrics, and were on solid ground, not once but twice. The second time, they lost credibility.”

The break-up was to come: Icahn vs. the board.

Before agreeing to the recovery plan in January of 2016, Icahn dispatched two fiery letters to the board. He argued that AIG was “too big to succeed,” and should split into three publicly-traded insurers: P&C, life, and mortgage coverage. AIG, Icahn declared, was severely handicapped by its designation by the Fed as a Systemically Important Financial Institution (SIFI), whose failure could cause a financial crisis. For Icahn, AIG was a “SIFI conglomerate” forced to hold excessive amounts of capital and over-burdened by costly, stifling regulations.

If AIG split into three companies, none would be categorized as a SIFI. And each could focus on its specialty, shedding billions of dollars in total overhead. Paulson predicted that the the total value of the spinoffs and the original AIG, holding the P&C business, would be worth 66% more than AIG’s stock price at the time they advocated for the breakup.

The poor results hand Icahn a sword to un-sheath in a new crusade to split AIG. Paulson can use his influence as a director to advocate a breakup. But so far, that view appears to be in the minority. The AIG board seems committed to perpetuating its diversified business model. In the press release announcing Hancock’s resignation, chairman Douglas Steenland stated, “The board recognizes the value of the combined strength of AIG’s consumer and commercial franchise.” He added that “the board believes strongly that this is the right plan and remains committed to the financial targets and objectives we’ve announced.”

Those goals are indeed the ones Icahn agreed to. But Hancock’s departure acknowledges that AIG wasn’t on track to get there. It’s clear that AIG suffered from poor underwriting standards, not just in the past, but as late as 2016. What’s more, the metrics for predicting losses were wrong, and wrong recently—twice.

We’ll soon see if Icahn gives AIG another chance to get it right. But if Icahn acts like Icahn, he’ll soon be making vociferous demands to split one of the most iconic names, and brave survivors, in the annals of financial services.