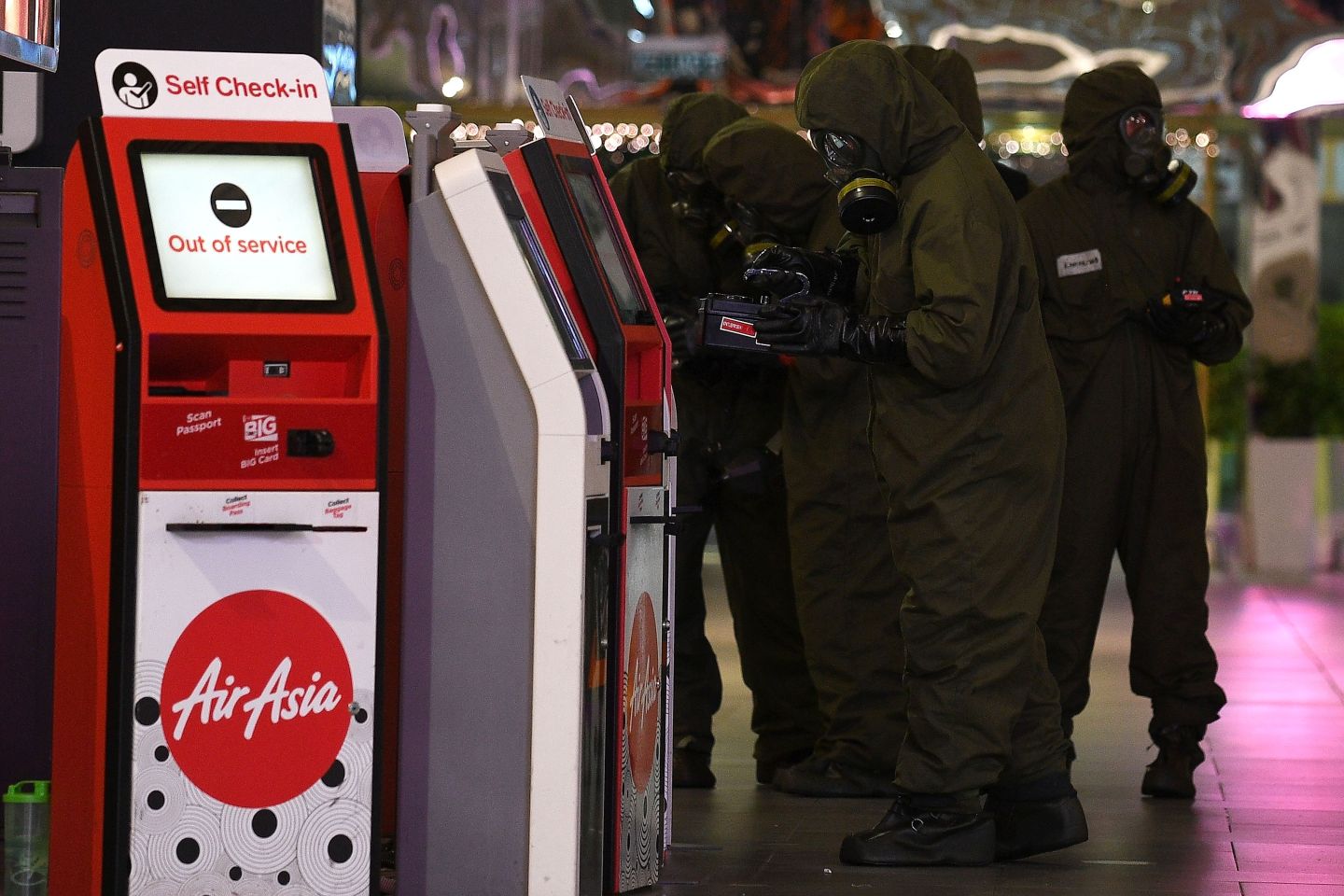 Members of Malaysia's Hazmat team conduct a decontamination operation at the departures terminal of the Kuala Lumpur International Airport 2 (KLIA 2) in Sepang on February 26, 2017. Kim Jong-Nam, the half-brother of North Korean leader Kim Jong-Un, was killed at the airport on February 13. Malaysian police told the public they would do everything possible to ensure there was no risk from the lethal VX nerve agent used to assassinate Kim Jong-Nam. / AFP / MANAN VATSYAYANA / (Photo credit should read MANAN VATSYAYANA/AFP/Getty Images)
MANAN VATSYAYANA AFP/Getty Images

Malaysia on Sunday declared its international airport a “safe zone” after completing a sweep of the terminal where the estranged half-brother of North Korean leader Kim Jong Un was assaulted with a deadly chemical last week.

Kim Jong Nam died on Feb. 13 after being smothered at the airport’s budget terminal with VX nerve agent, classified by the United Nations as a weapon of mass destruction.

“We confirm, number one, there is no hazardous material found in KLIA2, number two, KLIA2 is free from any form of contamination of hazardous material and thirdly, KLIA2 is declared a safe zone,” Abdul Samat Mat, the police chief of Selangor state who is leading the investigation, told reporters at the airport.

In later clips Kim is seen asking airport officials for medical help, and rubbing his eyes and stumbling as he entered an airport clinic. Airport authorities said he complained of dizziness and died on the way to hospital.

Authorities have said there have been no anomalies in medical cases reported at the clinic since the incident. They also said medical staff at the clinic are in good health.

The two women—one Indonesian and one Vietnamese—have been detained, along with a North Korean man.

Seven other North Koreans have been identified as suspects or are wanted for questioning, four of whom have since left for Pyongyang, police said.

Police are also sweeping other locations in Kuala Lumpur that suspects may have visited.

Police chief Abdul Samah earlier on Saturday said authorities raided an apartment in an upscale Kuala Lumpur suburb earlier this week in connection with the death, and were checking for any traces of unusual chemicals in the apartment.

Kim Jong Nam, who has been living in exile with his family in Macau under Chinese protection, had spoken publicly in the past against his family’s dynastic control of the isolated, nuclear-armed state.

South Korean and U.S. officials said he was assassinated by North Korean agents. North Korea has not acknowledged his death.

Malaysia’s health minister Subramaniam Sathasivam said at a press conference on Sunday that autopsy findings were consistent with police reports showing Kim was killed by VX.

The minister said the chemical caused “serious paralysis which led to the death of the person in such a short period of time.”

The Indonesian attacker, Siti Aishah, was reported to be unwell, possibly due to contact with the chemical.

Subramaniam said authorities were running tests to ascertain whether Siti was affected by the chemical.

Malaysia is considering shutting its embassy in Pyongyang or expelling North Korea’s envoy as tensions escalate over the killing.

It said it may issue an arrest warrant for a North Korean diplomat wanted for questioning over the case but said “reasonable” time will be given for the diplomat to come forward before further action.

The diplomat is not known to have met the police yet.