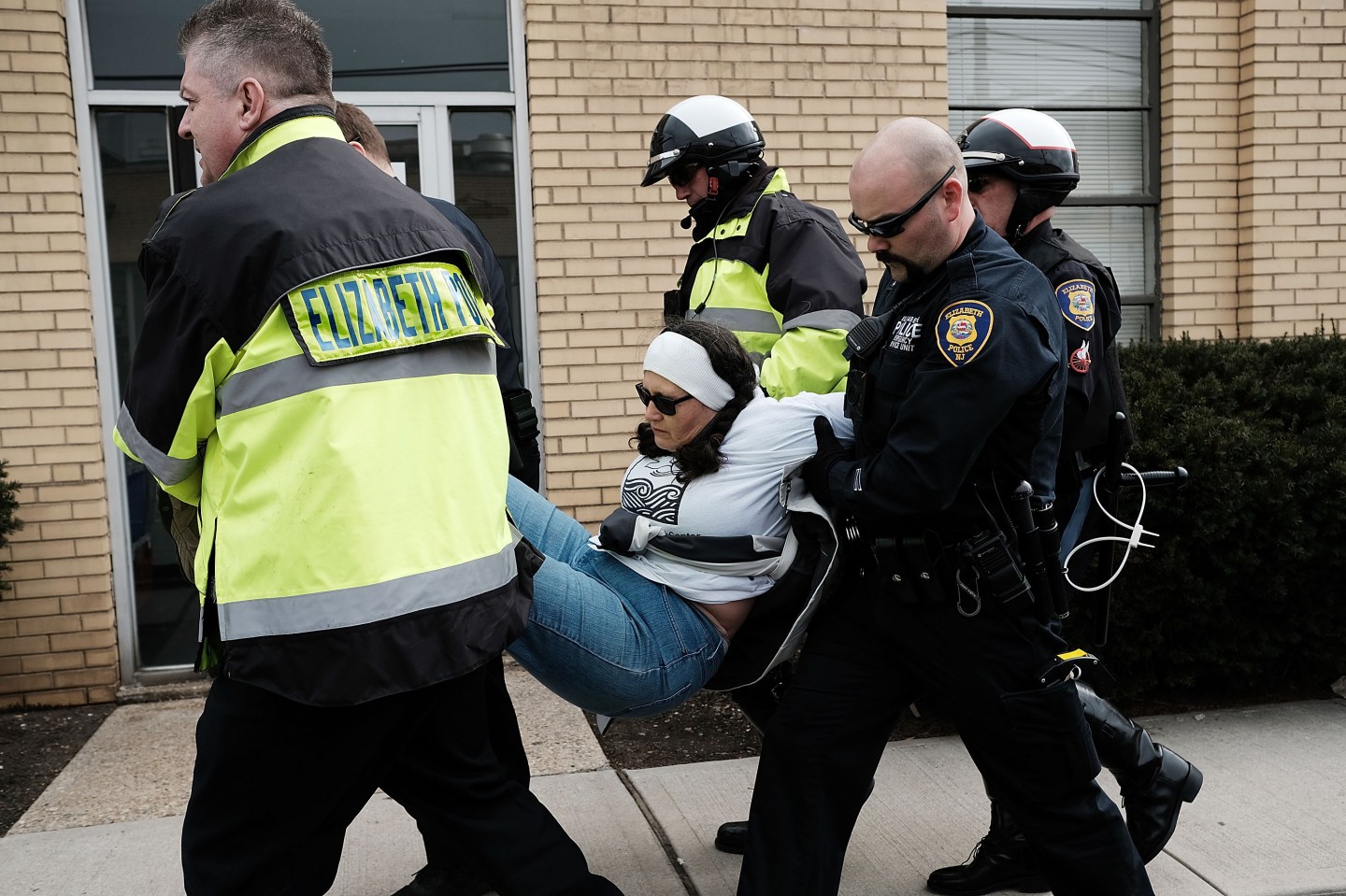 Police arrest a protester outside of the Elizabeth Detention Center during a rally attended by immigrant residents and activists on February 23, 2017 in Elizabeth, New Jersey (Photo by Spencer Platt/Getty Images)
Spencer Platt Getty Images

When President Donald Trump signed an immigration enforcement executive order during his first week in office, he titled it “Enhancing Public Safety in the Interior of the United States.” But new deportation rules released Tuesday by the Department of Homeland Security (DHS) make clear that the Trump administration’s approach to immigration enforcement will do anything but enhance public safety.

Instead, by eliminating the idea that enforcement resources should be focused on the highest priorities, attempting to drive a wedge between local law enforcement agencies and the communities they are sworn to protect, and conducting enforcement actions at sensitive locations such as churches and courthouses, the administration has adopted an approach that places mass deportation—not public safety—at the top of its agenda.

One of the first steps taken by this administration was to abandon the very idea that the DHS should operate under sensible immigration enforcement priorities. Every law enforcement agency has to decide how to use limited resources to best achieve its mission of keeping communities safe. In cities and towns across America, law enforcement executives charged with ensuring public safety and promoting the general welfare routinely set priorities to focus their energies on the offenses that matter most.

In 2014, the DHS, under then-Secretary Jeh Johnson, published guidance identifying the top immigration enforcement priorities for department personnel. At the top of the list were threats to national security, border security, and public safety. This guidance built upon and refined policies adopted earlier in the Barack Obama administration, which, in turn, built upon policies adopted during the George W. Bush administration, as well as policies dating as far back as 1976. While not perfect, those policies largely worked: The share of people deported from the interior of the country who were previously convicted of a crime increased from 51% in 2009 to more than 90% in 2016.

In place of those policies, the Trump administration has adopted an approach that contains no distinction between people convicted of violent felonies, people charged with minor traffic infractions, and people like Jose Escobar, who entered the country as a child 16 years ago and has been working to support his U.S. citizen wife and children. According to the Los Angeles Times, as many as 8 million of the estimated 11.1 million unauthorized immigrants in the country today could count as enforcement priorities under this administration. The policy of the Trump administration simultaneously makes everyone—and therefore no one—a priority.

It should come as little surprise that the administration’s policies create a blueprint for mass deportation. During his campaign, Trump promised to create a so-called humane “deportation force.” In addition to the 15,000 new Border Patrol agents and immigration enforcement personnel that the administration hopes to hire, Trump is focused on dramatically increasing the involvement of state and local law enforcement agencies in enforcing federal immigration laws. The administration contemplates doing this both through coercion—namely, threats to withhold federal funds from places that the DHS deems to be “sanctuary jurisdictions”—and through enticement. Neither approach will make us safer.

Dozens of police chiefs and sheriffs around the country and the Major Cities Chiefs Association have long maintained that when local police are viewed as extensions of federal immigration authorities—which is what Trump’s immigration orders aim to do—communication and cooperation between law enforcement and local communities disappear and crime thrives.

For police, it pays to keep an eye on the primary mission of smart policing. In fact, a study released in January found that crime is statistically significantly lower in U.S. counties that limit whether and under what circumstances law enforcement will hold people in custody for immigration authorities beyond their release date in the absence of probable cause or a warrant. A 2008 study examining Maricopa County, Ariz., similarly concluded that as former Sheriff Joe Arpaio diverted resources away from bread-and-butter law enforcement work and toward enforcing federal immigration laws, violent crime rates soared and the sheriff’s department was thrown into a financial crisis.

Not only is everyone fair game under Trump’s mass deportation approach, but no place appears to be off-limits for routine enforcement. In El Paso, Texas earlier this month, Border Patrol agents arrested a victim of domestic violence moments after she appeared in court to secure a protective order against her abuser; county officials believe immigration officials were acting on a tip provided by the abuser himself. Also earlier this month in Alexandria, Va., immigration agents reportedly staked out a hypothermia shelter located at the Rising Hope Mission Church, and arrested a number of men when they left.

In both cases, officials clearly violated existing DHS policies that erect sensible limits regarding when and how enforcement operations should be conducted at or near sensitive locations or in courthouses. These policies exist because communities are worse off when victims are afraid to seek protection in court, the homeless are afraid to seek shelter from the cold, parents are afraid to send their children to schools, and people with serious—and possibly infectious—medical conditions are afraid to seek emergency medical attention.

Perhaps the administration has officially rescinded these policies or perhaps officers in the field are intuiting that they are now allowed to break the rules with impunity. Either way, communities will suffer as a result.

Trump has been using immigrants as political props and bogeymen since the day he announced his intention to run for president. By regularly—and falsely—demonizing immigrants as dangerous criminals who prey upon the American public, Trump has attempted to lay the foundation for his argument that mass deportation will enhance public safety. But in reality, the policies Trump and his administration are pursuing will squander limited enforcement resources, spread fear throughout immigrant communities and undermine trust in local law enforcement, and harm the most vulnerable Americans. These policies will not make us safer, and they will certainly not make us great.

Tom Jawetz is the vice president of immigration policy at the Center for American Progress.