Urban Outfitters Is Charging $45 for an AOL T-Shirt 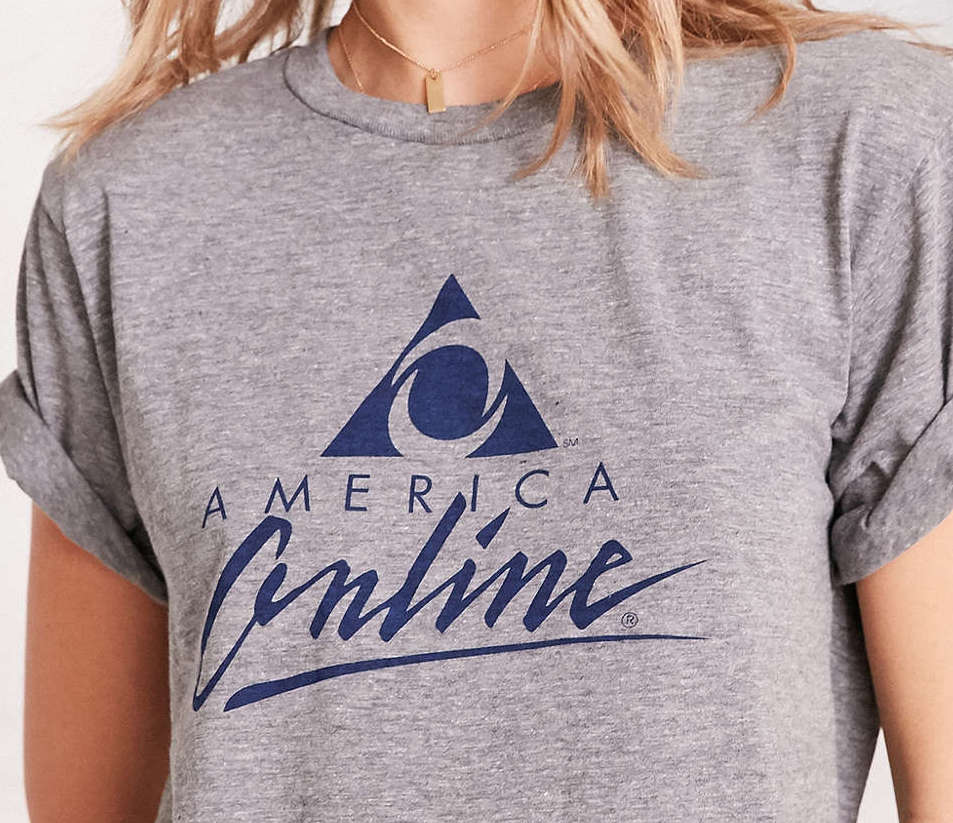 If you’re looking for something to make you feel old, this will do the trick.

Urban Outfitters is selling t-shirts with America Online logos with a $45 price tag attached, as spotted by Tech Insider and several other news outlets this week.

By comparison, AOL Internet service (which some people really still use) these days costs a little more than half of that. Furthermore, a share of AOL’s owner, Verizon (VZ), costs just $4.45 more than the shirt.

The Philadelphia-headquartered retailer is known hawking clothing to a younger audience (you usually don’t have to look far from a college campus to find one), picking up more of a “hipster” reputation in recent years with plenty of rather high-priced flannel shirts, ripped jeans, and even shabby chic furniture pieces on the show floor. For years, Urban Outfitters has also been stocking retro graphic T-shirts with pop culture imprints ranging from 1980s rock bands to Star Wars.

Nostalgia for the 1980s and the 1990s has peaked in recent years, as evidenced elsewhere in the fashion world with a denim comeback not to mention listicle upon listicle on BuzzFeed, reboots of countless nineties sitcoms from Boy Meets World to Full House (or original takes on dated themes like Netflix’s Stranger Things), or even the release of the Nintendo NES Classic Edition that immediately became The Gift of the 2016 holiday season.

But the placement of the 1990s AOL logo on a T-shirt—with a $45 sticker price—seems to have hit a nerve, whether it be the exorbitant price for a simple gray t-shirt or a t-shirt with the exorbitant price of a company that Urban Outfitters’ current target demographic is probably unfamiliar with beyond seeing You’ve Got Mail. (And that movie isn’t even available to stream on Netflix (NFLX) right now, and they’re probably cord-cutters, so little chance of seeing it on cable either.)

Additionally, anyone who has attended tech conferences might either laugh or scoff (or both) at the availability of this product at all given how tech companies regularly hand out free shirts (among other useless pieces of “swag”) with their logos ad nauseum.

Available still in three sizes, the shirt is just $5 shy of free shipping.