Facebook and Google Funding Journalism: A Solution, or a Hail Mary Pass? 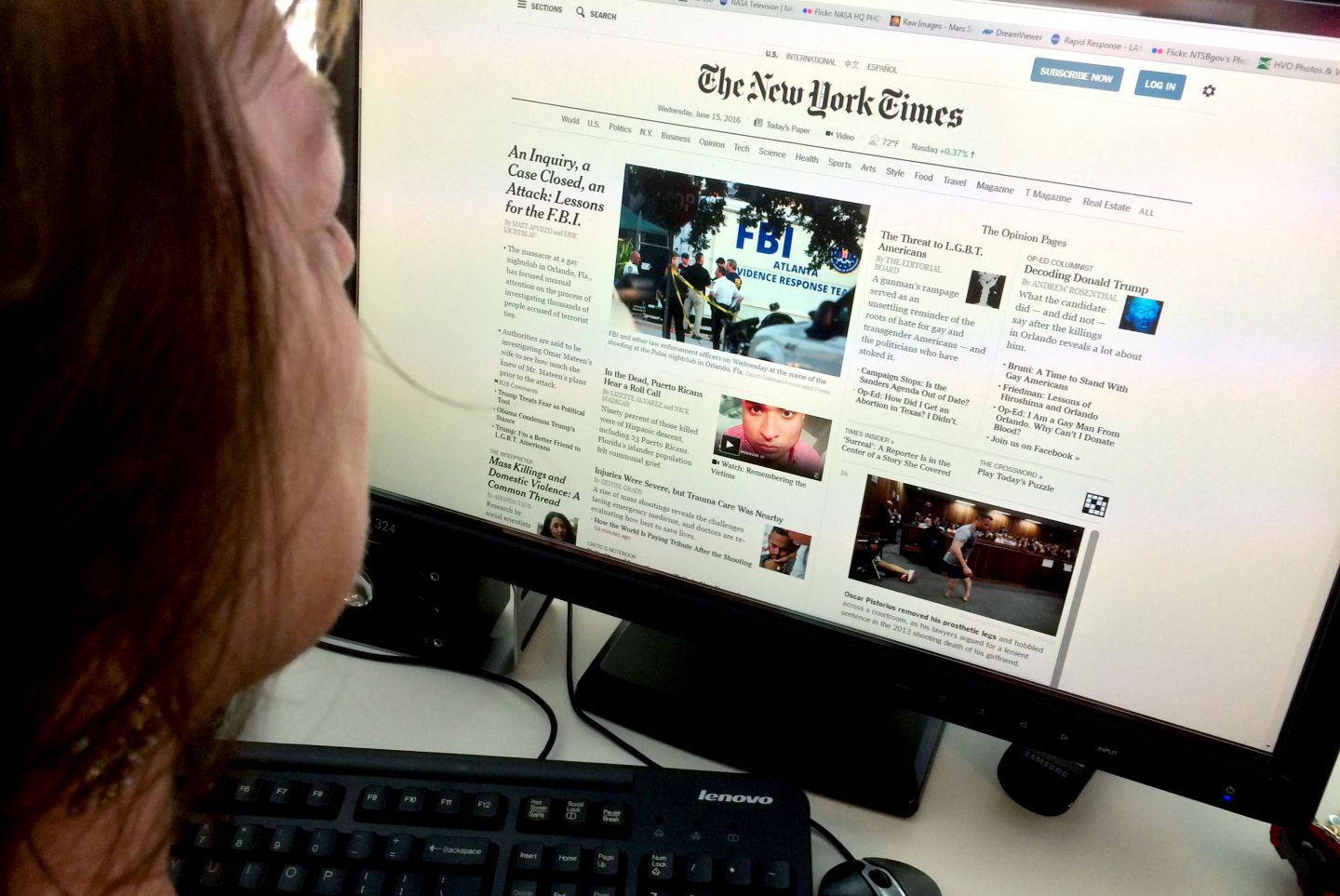 A woman reads The New York Times on her computer on June 15, 2016 in Washington,DC. The grim news for newspapers: digital is doing little to rescue them from their deepening woes. Reeling from weak circulation and ad revenue, the traditional newspaper world faces an ugly picture while social media and tech firms benefit from the shift to digital, a Pew Research Center study released on Wednesday found. / AFP / Karen BLEIER (Photo credit should read KAREN BLEIER/AFP/Getty Images)
Photograph by Karen Bleier — AFP/Getty Images

As media outlets struggle to replace the rapidly disappearing revenue they used to get from traditional advertising, they see Google and Facebook taking the lion’s share of what has come along to replace it. And now some argue that those technology giants should repay some of what they have taken and help fix journalism.

But would doing so really solve anything?

In a recent opinion piece published in the New York Times, entitled “What Facebook Owes to Journalism,” Steven Waldman—a former senior adviser to the chairman of the Federal Communications Commission and former visiting scholar at Columbia University—argues that the founders of Facebook, Google, and Apple need to donate billions to save the journalism market they destroyed.

Waldman notes that Facebook has talked about its role in the media ecosystem, and recently started a Journalism Project aimed at helping local news outlets make use of the social network. Google has a similar venture called Google News Lab. But these are not enough, Waldman says.

“While training, technology and innovation are critical, what journalism needs most now is money, and lots of it — to fund full-time local journalists. What these companies have donated so far is too little given how wealthy they are, how much harm they’re (inadvertently) doing — and how much good they could do.”

The author calls on Google’s co-founders Sergey Brin and Larry Page, Facebook CEO Mark Zuckerberg and Apple co-founder Steve Jobs’ widow Laurene Powell to donate 1% of their corporate profits every year for the next five years, in order to create a $4-billion-plus endowment fund to support journalism. In effect, he says it is their duty to do so (how this fund would be managed is unclear).

Emily Bell, the director of the Tow Center for Digital Journalism at Columbia University and a former senior digital editor at The Guardian in the UK, puts forward a related idea in an essay in the Columbia Journalism Review.

In Bell’s view, Zuckerberg and other tech founders need to help jump-start a digital revolution in journalism not just by providing help to newspapers and other outlets, but by directly funding a new non-profit digital entity—in the same way the British government created the British Broadcasting Corporation in 1922. She says:

“America needs a radical new market intervention similar to that made by the UK Government in 1922. Remaking independent journalism requires funding that is independent of individuals or corporations, has a longtime horizon built into it, and offers complete independence and as much stability as possible.”

Whereas Waldman envisions a massive endowment fund that would be spread out among existing and new journalistic outlets, Bell’s model would create a new non-profit organization that would be managed by a board of trustees, and presumably provide its content for free to any and all who might want it.

The three major questions that these proposals spark are: 1) Do technology companies or their founders actually have a duty to do this? 2) Is there any realistic chance that this might actually come to pass? and 3) Would it solve any of journalism’s real problems if it did happen?

The second of these is probably the easiest to answer. Barring actual legislation—which seems extremely unlikely, especially in the current political environment—expecting Brin, Page, Zuckerberg, and Powell to suddenly hand over a billion dollars annually for the next five years to “save” journalism seems wildly optimistic.

As for whether any of these companies owe some kind of duty to fix the journalism market that they broke, in order to believe that this statement is true, we have to assume that Google and Facebook and Apple somehow knowingly destroyed the media market by removing billions of dollars in advertising revenue.

One analogy that Waldman draws is Craigslist, which he (and others) argue siphoned off billions in value from the newspaper market, although that claim has been debunked a number of times. All Craig Newmark did was take advantage of a new technology to offer a more compelling service—one that newspapers themselves could easily have replicated. They chose not to.

@mathewi "Ford and Deusenberg have decimated carriage manufacturing revenue. Is it time for these horseless buggy titans to give back?"

In the same way, Google and Facebook both created services that made sense given the current technology they had to work with, just as newspapers did around the turn of the century. The reality is that these digital businesses provided far more value to advertisers at a far lower cost than newspapers and other media companies could. Is that Mark Zuckerberg’s fault, or Sergey and Larry’s? No.

It’s also worth noting that a number of billionaires have funded journalism in their own way, including Amazon CEO Jeff Bezos, who spent $250 million to buy the Washington Post several years ago, and eBay co-founder Pierre Omidyar, who funded the creation of First Look Media.

But even if these companies didn’t break the market for media, should they nevertheless be forced to help fix it, simply because they have the resources to do so? In her CJR essay, Bell argues that technology companies “should support journalism because they are currently the only organizations who can.”

The only group not responsible for media's problems is media itself, its short sighted, bonusminded execs, who turned blind eye to "change" https://t.co/0KYewdwRtV

Even if we assume that they should do so—because they see the value of journalism to society and to their businesses—there’s no guarantee that a $4-billion endowment is going to solve some of the structural problems in media. Media companies have probably wasted that much and more going down blind alleys, avoiding making the decisions that might actually have helped them adapt, and paying their executives inflated salaries for doing nothing.

Web pioneer Dave Winer argues in a post of his own that what media companies should be doing is competing with Facebook and Google using the open web and a new approach to serving their audience, not capitulating to those giant services and begging them for salvation.

The bottom line is that traditional media entities are largely to blame for their own problems, along with structural changes in the media marketplace that most have failed to adapt to. It’s reasonable to ask companies like Google and Facebook for their help in making that evolution, but what Waldman in particular is asking for sounds a lot more like a bailout. And that likely wouldn’t help anyone.