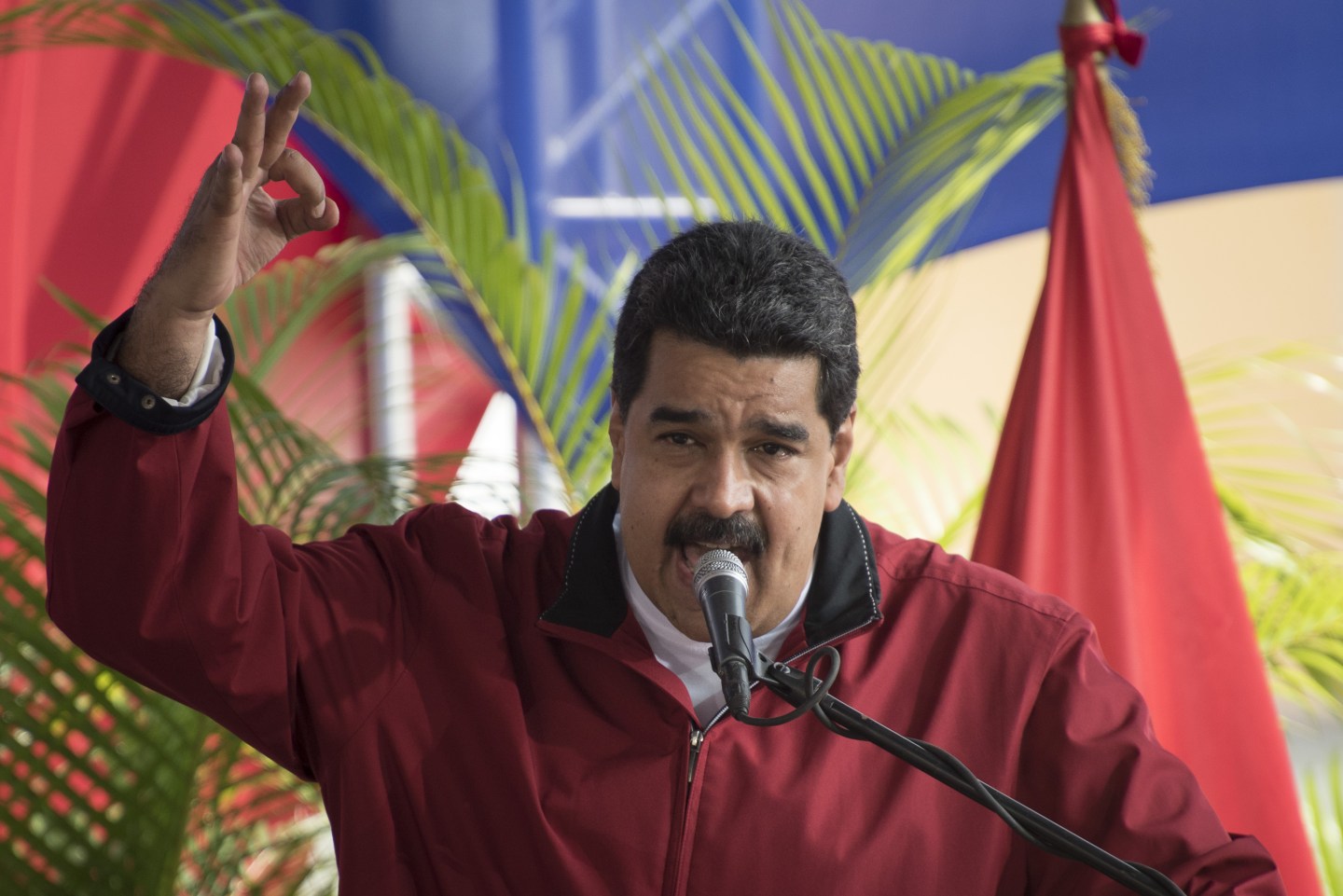 Nicolas Maduro, president of Venezuela, speaks during a swearing in ceremony for the new board of directors of Petroleos de Venezuela SA (PDVSA), Venezuela's state oil company, in Caracas, Venezuela, on Tuesday, Jan. 31, 2017. Maduro has given his vice president wide-reaching decree powers, including the ability to determine ministries' spending plans and expropriate private businesses, in a move that has fueled speculation over possible succession plans. Photographer: Carlos Becerra/Bloomberg via Getty Images
Photograph by Carlos Becerra—Bloomberg via Getty Images

President Nicolas Maduro’s government ordered the suspension of CNN’s Spanish-language service from Venezuela‘s airwaves on Wednesday, accusing it of distorting the truth in coverage.

The network had irked the socialist government with various reports, including one alleging passports and visas were being sold illegally at Venezuela‘s embassy in Iraq.

Maduro at the weekend told CNN to “get out” of Venezuela after accusing it of manipulating comments by a girl who told him on live TV some school students were fainting from hunger.

“They defame and distort the truth… inciting aggression against the sovereignty of Venezuela and its institutions,” regulator Conatel said in its statement.

CNN said the Maduro government was unfairly denying Venezuelans a 20-year news service they had enjoyed, but added that its signal would be available for free on YouTube.

“At CNN en Español we believe in the vital role that freedom of press plays in a healthy democracy,” it added.

The spat with the network has come at a delicate time in U.S.-Venezuelan ties after Washington this week blacklisted Maduro’s Vice President Tareck El Aissami on drug charges in the first bilateral flare-up under new U.S. President Donald Trump.

Venezuelan officials have reacted furiously to that, though they appear to be trying to avoid provoking Trump.

“I don’t want problems with Trump,” Maduro said on TV on Wednesday, adding that CNN had become “an instrument of war.”

About an hour later, Trump called for the release of prominent jailed Venezuelan opposition leader Leopoldo Lopez in a tweet, posing in a photo with Lopez’s wife Lilian Tintori.

In various calls with Latin American leaders, Trump has expressed concern over the Maduro government, yet it remains to be seen whether Trump will prioritize Venezuela.

“Venezuela rejects the interference and aggression of U.S. President Donald Trump,” she said.

OPEC member Venezuela is immersed in a deep economic crisis, with inflation in triple digits, shortages of basic goods, and many people going hungry.

Maduro, whose popularity has plunged during the crisis, blames the problems on an “economic war” waged by the United States and local opponents with the complicity of foreign media.

Foreign journalists are finding it increasingly hard to obtain visas to operate in Venezuela, and two Brazilian reporters said they were expelled at the weekend while trying to investigate unfinished works by construction giant Odebrecht.