In China, the Trump Name Is Applied to Everything From Condoms to Toilets 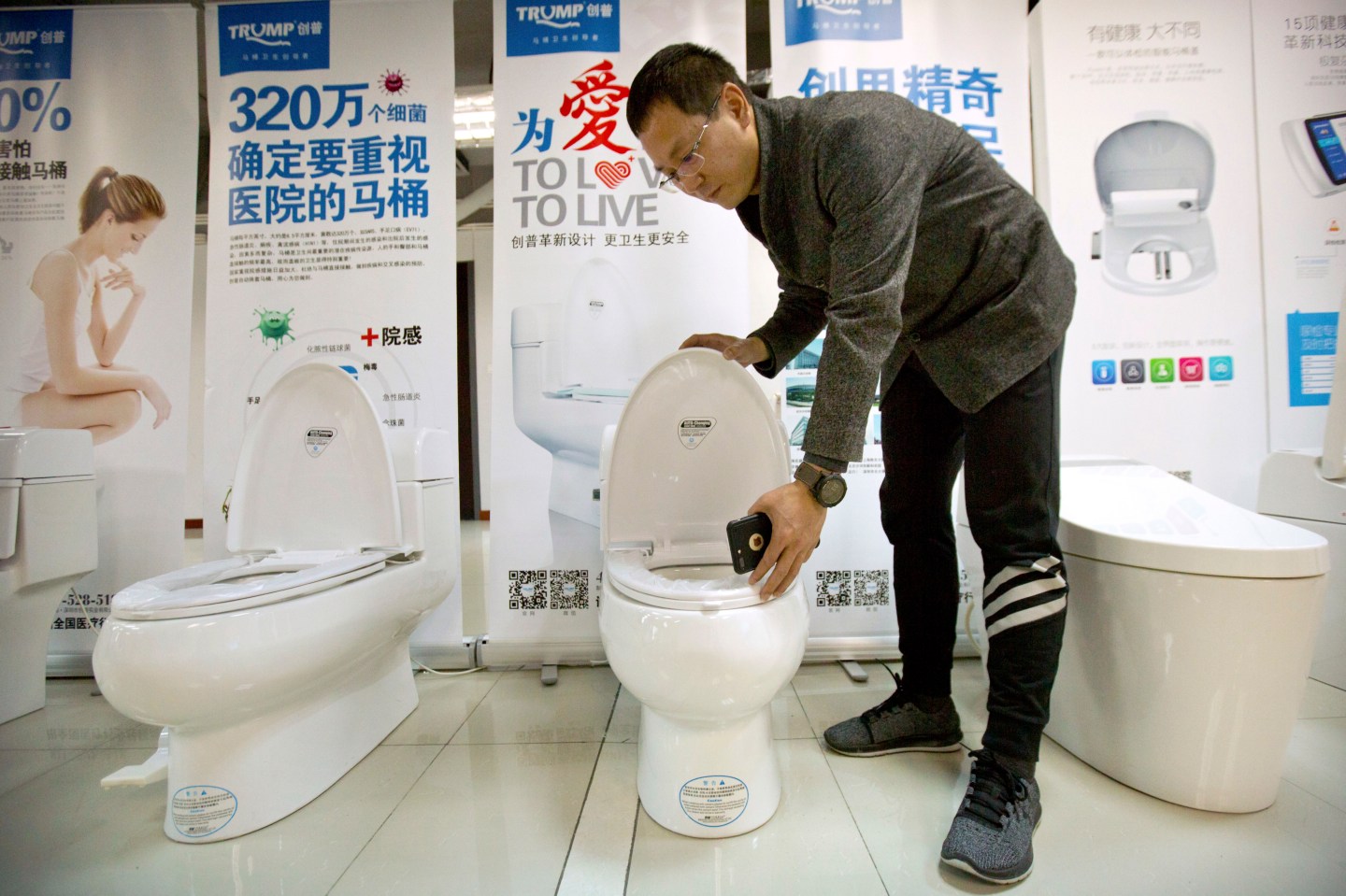 In this Monday, Feb. 13, 2017 photo, Zhong Jiye, a co-founder of Shenzhen Trump Industrial Co., demonstrates the use of one of his firm's high-end Trump-branded toilets at the company's offices in Shenzhen in southern China's Guangdong Province. U.S. President Donald Trump is poised to receive something that he had been trying to get from China for more than a decade: trademark rights to his own name. After suffering rejection after rejection in China's courts, he saw his prospects change dramatically after starting his presidential campaign. (AP Photo/Mark Schiefelbein)
Mark Schiefelbein — AP

President Donald Trump’s triumph in the fight to wrest back his brand for construction services in China could spell the end of more than 225 Trump-related marks here that don’t belong to him, including Trump toilets, Trump condoms, Trump pacemakers and even a “Trump International Hotel.”

After a decade of grinding battle in China’s courts, an official finding in Trump’s favor expected this week could signal a shift in fortune for the U.S. president’s intellectual property. Also at stake are 49 pending Trump trademark applications — all made during his campaign — and 77 previously registered marks, most of which will come up for renewal during his term.

Each win creates value for Trump’s business empire — and raises ethics questions about his administration. Critics say the trademarks present conflicts of interest for Trump and may violate the emoluments clause of the U.S. Constitution, which bars public servants from accepting anything of value from foreign governments unless explicitly approved by Congress.

“There can be no question that it is a terrible idea for Donald Trump to be accepting the registration of these valuable property rights from China while he’s a sitting president of the United States,” said Norman Eisen, who served as chief White House ethics lawyer for President Barack Obama. “It’s fair to conclude that this is an effort to influence Mr. Trump that is relatively inexpensive for the Chinese, potentially very valuable to him, but it could be very costly for the United States.”

China could use Trump’s desire to control his brand to extend or withhold favor, particularly since its courts and bureaucracy reflect the imperatives of the ruling Communist Party.

Eisen is involved in a lawsuit alleging that Trump’s foreign business ties violate the U.S. Constitution. Trump has dismissed the lawsuit as “totally without merit.”

The precise value of the trademarks is uncertain, but in a 2011 letter to then-U.S. Commerce Secretary Gary Locke, Trump wrote that he spent hundreds of thousands of dollars to defend his brand in China.

He railed against Chinese courts for not recognizing that he was famous, writing that “it appears the only two places in the world I am not well known are” China and Macau.

Trump’s elevated profile as president will likely make it easier to protect his brand in China, said Zhou Dandan, a lawyer with Unitalen Attorneys at Law in Beijing, which has worked for Trump since 2006. Trademark authorities will almost certainly reject new “Trump” applications from unrelated parties, she said, and may take back rights from existing “Trump” trademark holders.

That’s what happened in the case nearing completion this week.

Back in December 2006, Trump applied for rights to the Trump mark for construction services. He was rejected because China operates on a first-come-first-served principle and a man named Dong Wei had filed a similar application two weeks earlier. Trump appealed to Chinese authorities for 10 years and was rejected time and again, right up until the month before he declared his candidacy.

Then something changed. China’s trademark authorities published their decision to invalidate Dong’s trademark for construction services on Sept. 6, 2016. Trump’s application moved ahead, and if no one objects, the trademark will be registered to Trump on Tuesday. Dong could not be reached for comment.

Why is Trump winning now, after years of failure? China’s State Administration for Industry and Commerce and its foreign ministry did not reply to requests for comment.

Alan Garten, chief legal officer of The Trump Organization, said the Chinese trademarks were already in the works before the election, and the president has turned management of his company over to his children and a team of executives.

In an email, Garten wrote, “The only mark we were seeking was one in the related class of construction which someone was improperly squatting on.”

Some lawyers say Trump may have benefited from a general hardening in China’s stance toward trademark squatters, but others believe politics played a role.

“It would be hard to imagine that the judges, the Trademark Office and/or the Trademark Review and Adjudication Board were acting without some kind of guidance,” said Dan Plane, a director at Simone IP Services, a Hong Kong intellectual property consultancy.

Meanwhile, the makers of Trump-branded luxury toilets at Shenzhen Trump Industrial Co. say they will defend their brand, even if it means taking on the U.S. president.

Co-founder Zhong Jiye said his Trump toilets have nothing to do with President Trump. The Chinese name brings together ideas of innovation and popularity, he said. And in English, the “U” makes a nice toilet-seat shaped logo.

Trump toilets for the home can do pregnancy tests. Models for public use have disposable seat covers for improved hygiene. People use Trump toilets some 100 million times a year, Zhong said.

Among them, he added, are customers at Zhongnanhai, the official residence of Chinese President Xi Jinping.