The $10 Billion Battle for CSX Stock Will Be Decided Shortly 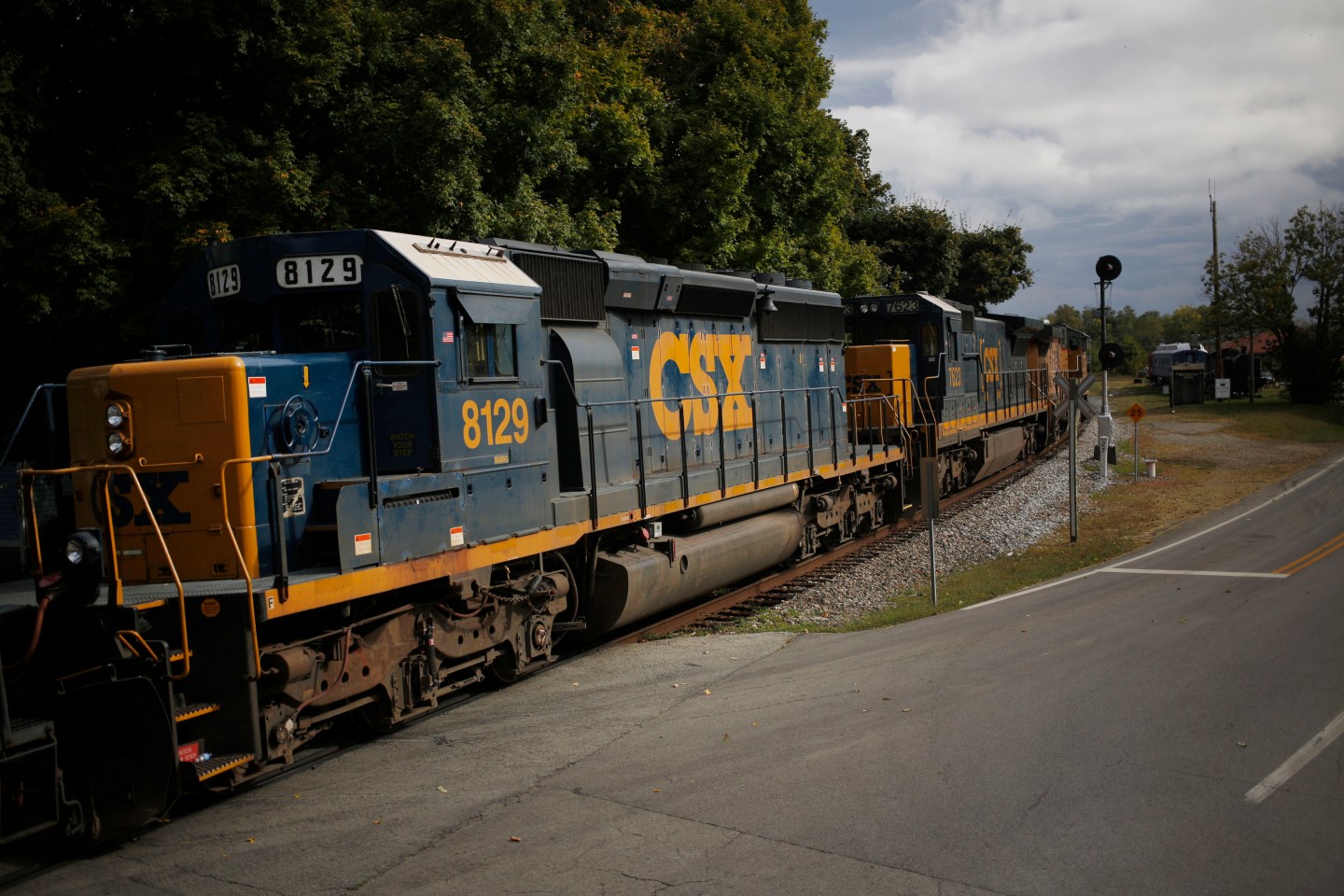 The man who has set railroad giant CSX shares chugging up $10 billion will have to wait longer to take the conductors title, if at all.

Few corporate conflicts are more riveting right now than the battle for CSX.

Hunter Harrison, a 72-year-old railroading legend, is seeking the top job at America’s third-largest freight carrier on the strength of his towering reputation. In exchange for lending CSX (CSX) the industry’s most prized set of skills, he’s demanding an epic pay package and full boardroom control. Investors want him badly. But is he asking too much?

Earlier this week, CSX announced that the fate of the company will be put to a shareholder vote. The company will hold a special meeting––the date has yet to be announced––so that shareholders can vote on whether to install Harrison as CEO, with his inflexible list of demands, or send him and his shareholder activist backer, Paul Hilal, to the rails.

Here’s how the saga has unfolded: On Jan. 18, Harrison announced his departure from the CEO role at Canadian Pacific, months before his scheduled retirement. Harrison departed to team up with Hilal, founder of hedge fund Mantle Ridge LP, which had recently purchased a 4.9% stake in CSX. The announcement sent CSX shares soaring from $37 to $46, and they’ve since risen to $48. That surge has driven CSX’s market cap from $34.5 to $44.6 billion, driven by the prospect that Harrison will soon be running CSX.

But so far, CSX is bristling at what it views as Harrison and Hilal’s excessive demands. It was Hilal as a partner at Bill Ackman’s Pershing Square Capital who led the proxy fight that installed Harrison as chief of then-ailing Canadian Pacific in mid-2012, where he performed his third dramatic turnaround, and earning him the reputation as North America’s premier railroad-fixer. Harrison agreed to forego a $118 million retirement package at Canadian Pacific in order to be released from his non-compete agreement.

In a lengthy press release on Feb. 14, CSX recounted its thorny negotiations with Harrison and Hilal. The railroad was “planning to make an announcement” on a new CEO to replace long-serving chief Michael Ward when Harrison and Hilal launched their salvo. At a five hour meeting with the CSX board on Feb. 1, Harrison and Hilal presented their demands on two principal issues, pay and governance.

On compensation, the Mantle Ridge team proposed that CSX grant Harrison an “equity award” covering 1% of CSX’s stock. Mantle Ridge stated that the award could come in the form of stock options, and that’s what they appear to be proposing. It put the present value of the grant at $160 million. That’s approximately what a batch of options with a face value of 1% of CSX’s shares, or $440 million, would be worth using the Black-Scholes valuation methodology. In what may be the most unorthodox––some might say outrageous––condition, Hilal asked that CSX reimburse Mantle Ridge for $88 million that it had paid Harrison to compensate him for the foregone package at Canadian Pacific, along with taxes on that money owed by Harrison, potentially amounting to an additional tens of millions. All told, according the CSX’s calculations, Harrison’s total proposed pay package amounts to an eye popping $300 million.

On governance, Harrison and Hilal want a pair of board seats for themselves, and the right to name four additional directors who aren’t affiliated with Mantle Ridge. Given that Ward and several other CSX board members will retire over the next two years, that arrangement would give the newly-appointed directors a majority by 2019. Hilal is also demanding the chairman’s role starting in 2018.

In a letter to Hilal on Feb. 6, the CSX board agreed to make Harrison CEO, but only if Mantle Ridge substantially softened its conditions. CSX refused to make the $88 million payment, plus the tax reimbursement, arguing that it would be inappropriate to, in effect, pay for Harrison’s contributions to another company. On governance, CSX agreed to name Harrison and Hilal to the board, but rejected their demand to name four directors. Instead, CSX agreed to name three new independent directors approved by both camps. It also stated that the new, independent board should be free to name a chairman of their own choosing.

So is Harrison really worth paying $300 million, and does he deserve the assurance of a unified board behind him?

Harrison is the ideal general to lead CSX. The railroad has a subpar record for sending and delivering cargo on time, and runs its trains 10% to 15% slower than its east coast rival Norfolk Southern. That inefficiency means that its giant capital stock parked in locomotives, boxcars, and track deliver less freight per dollar of investment than the best in the industry. “Harrison is an expert at ‘sweating the assets,'” says Donald Broughton, an analyst at Avondale Partners. “The easiest way to create financial returns in railroads is to improve the asset turnover.” Broughton reckons that lowing CSX’s ratio of operating costs to revenues from 70% to around 55%, could doubled the company’s earnings per share in the process.

Given how much the stock has risen, investors seem to agree, at least somewhat.

Indeed, the market is betting that Harrison gets the job, and that earnings will be far higher than what was expected before Harrison arrived on the scene. Hence, a gigantic options grant is actually a plus for shareholders. Harrison won’t make big money unless the shares rise well above the current $47 a share, meaning he must deliver on the substantial improvements investors are already expecting. Only if he exceeds them will he reap big rewards. If Broughton is correct, CSX will add as much as $40 billion or so to its market cap under Harrison. That’s an excellent deal for both shareholders and the septuagenarian taskmaster.

In effect, shareholders have already voted big for Harrison. It’s likely the two sides will either hammer out a compromise prior to the vote on Feb. 24, or investors will endorse Harrison and Hilal’s demands. Nobody, including the brass at CSX, wants to see its shares crater, which is exactly what would happen if Harrison doesn’t get the nod.

Instead, we’re about to witness the most rollicking spectacle in all of transportation: Hunter Harrison taming another railroad.