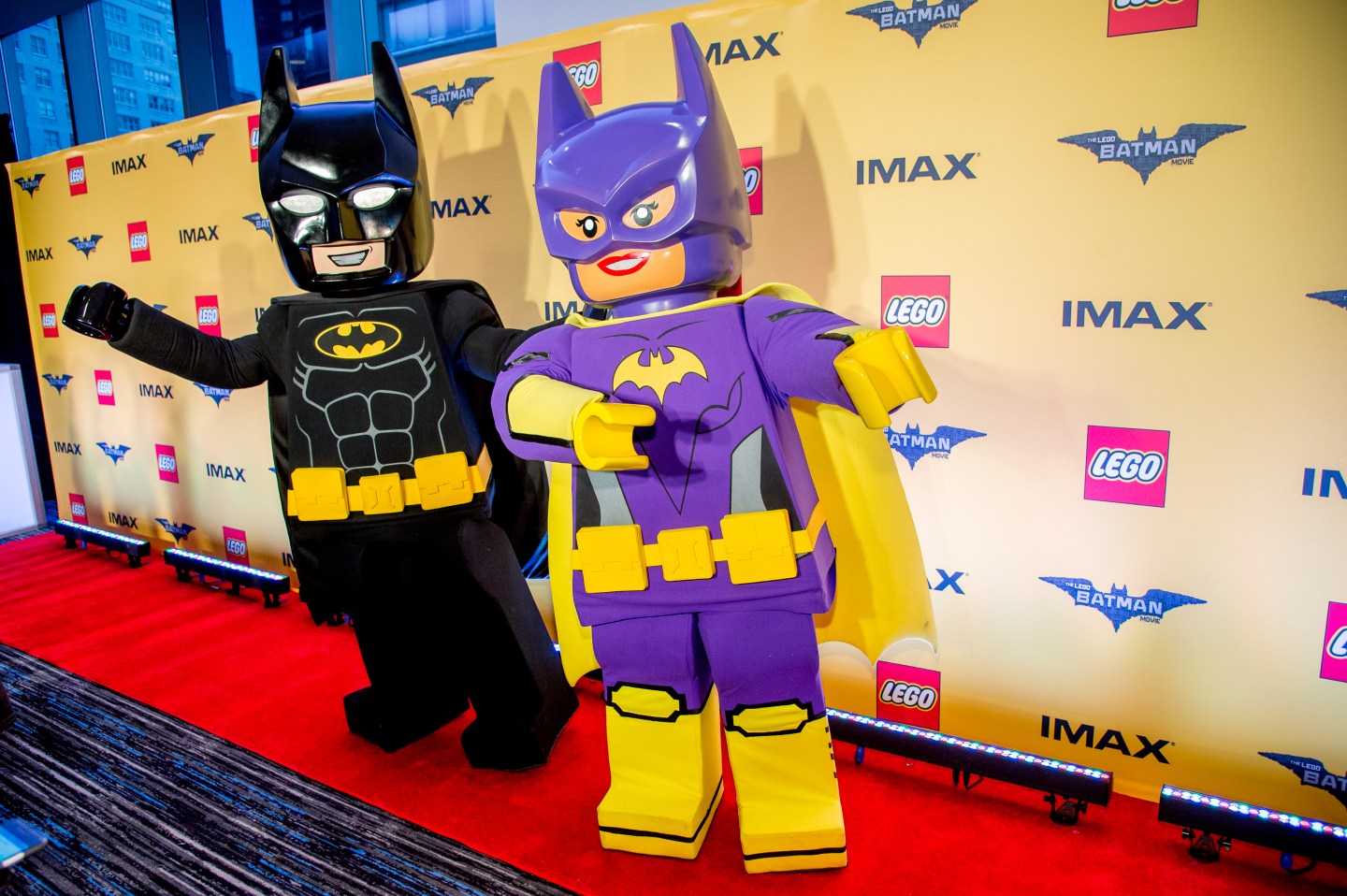 Costumed avengers, a billionaire with a kinky side, and a brutally efficient hit man proved to be just the tonic for an ailing domestic box office.

The Lego Batman Movie bested Fifty Shades Darker at the multiplexes over the weekend, earning a robust $55.6 million to capture first place. Fifty Shades Darker, the sequel to 2015’s Fifty Shades of Grey, couldn’t quite match its predecessor’s $85.2 million launch. It had to settle for a still sizable $46.8 million debut and second place on the box office chart.

Not to be outdone, Lionsgate’s John Wick: Chapter 2, a followup to 2015’s John Wick, picked up a smashing $30 million. That’s more than double what the first film racked up during its debut. The headlines will inevitably be about Fifty Shades Darker and The Lego Batman Movie, but the John Wick follow-up’s numbers are more impressive. It grew its audience substantially, adding more female viewers to the mix. Like Pitch Perfect and Austin Powers, both of which saw a major increase in ticket sales between their first and second installment, John Wick has now made a case for itself as a certifiable franchise.

“The first John Wick came out of nowhere theatrically and we know from the home entertainment team it way over indexed the norm,” said David Spitz, Lionsgate’s distribution chief. “Consumers loved everything about the world of John Wick.”

The three new releases succeeded by appealing to different demographics and age groups—kids went to the new Lego movie, women were titilated by Christian Grey’s red room, and men looked on as Keanu Reeve’s assassin made quick work of his foes. Heading into the weekend, stateside ticket sales were lagging behind last year’s numbers, down nearly 3% from 2016. Studio executives and exhibition industry insiders hope that this weekend will help reinvigorate interest in moviegoing, a comeback that will be aided by the upcoming release of Logan, a new Wolverine movie, and a live-action version of Beauty and the Beast.

Warner Bros. backed The Lego Batman Movie and sees the animated films built around the line of Danish toys as being key to its corporate future. The studio is leaning heavily on a slate of animated Lego films, DC Comics adventures, and Fantastic Beasts and Where to Find Them, a Harry Potter spinoff, to help it compete with Disney (DIS). That studio has popularized the concept of branded movies, with its arsenal of Star Wars, Marvel, and Pixar films. The Lego Batman Movie cost $80 million to make, which is downright affordable at a time when many animated films carry budgets that are more than $200 million. It pits Batman against the Joker, and boasts a voice cast that includes Will Arnett, Zach Galifianakis, Michael Cera, Rosario Dawson, and Ralph Fiennes. The series kicked off with 2014’s The Lego Movie, which made $469.2 million globally. Next September brings another spin-off, The Lego Ninjago Movie, a martial arts adventure with the voice of Jackie Chan.

The Lego Batman Movie now as the biggest opening of any 2017 release, but it did fall short of projections. Some analysts had predicted the family film would make more than $60 million.

Fifty Shades Darker is a Universal release. The studio didn’t give a budget for the film (as is its wont these days), but knowledgeable estimates put its cost in the range of $55 million. The sequel may have lost some of the audience who saw the first film to see just how much riding crop would make its way to screens, but there are other reasons it couldn’t equal the reception of Fifty Shades of Grey. That movie benefited from being released over the President’s Day holiday, a period that also coincided with Valentine’s Day, making it the date night movie dujour.

Nick Carpou, Universal’s domestic distribution chief, said that he expects that the film will show more endurance than its predecessor. Valentine’s Day takes place on Tuesday, and audiences are rating the sequel better than the original, giving it a B+ CinemaScore, as opposed to the C+ that Fifty Shades of Grey received. Critics, for their part, hated it, but they didn’t care for the first movie, nor the book on which it is based.

“The interest in it will spread out more,” predicted Carpou. “With next weekend being a holiday, it gives us a chance to have repeat business.”

Universal’s Split surrendered the first place it had occupied for three consecutive weekends to the barrage of newcomers. The hit thriller took in $9.3 million to capture fourth place on the chart, while pushing its domestic haul to $112.3 million.

Fox’s Hidden Figures rounded out the top five, earning $8 million. The Oscar-nominated drama about African-American NASA employees fighting racial prejudice in the early days of the space program has made $131.4 million stateside.

In milestone news, Universal and Illumination’s Sing topped $500 million globally. The animated film about a talent competition has launched a new animated franchise for the studios.

On the indie front, Fox Searchlight’s A United Kingdom opened in four theaters, grossing $70,000 for a per-screen average of $17,500. The drama chronicles a love affair between the King Seretse Khama of Botswana (David Oyelowo) and Ruth Williams (Rosamund Pike), a white woman from London, and the controversy it sparked.

The Weinstein Company’s Lion continued to chug along in its twelfth weekend, seeing its numbers rise even as it lost 68 screens. The drama about a man who uses Google Earth to find his long lost family in India grossed $4.1 million to push its domestic returns above $30 million. David Glasser, the company’s COO, argued that the story, which touches on immigration, has struck a nerve in a political climate dominated by talk of travel bans from certain countries. India is not one of the country’s targeted by the Trump administration, but Lion star Sunny Pawar, a native of the country, did have trouble getting permission to enter the U.S. for the film’s premiere.

“This is a zeitgeist movie,” he said. “As people discover it, you wouldn’t believe the emails that are pouring in. Every day we wake up to notes from politicians, tennis players, even a woman I know from Middle America all saying this couldn’t be more timely.”

Overall ticket sales did slide, and were unable to match the year-ago period, a weekend that saw the $132.4 million debut of Deadpool. Still, analysts note that weekend was President’s Day, a holiday that’s been pushed back by a week in 2017, making comparisons difficult. Some box office sages predicted that this will be the start of a torrid run at the multiplexes, one that will ultimately eclipse the high-water mark established last year.

“This is the true kickoff of what could be the biggest year ever,” said Paul Dergarabedian, senior media analyst at ComScore. “This weekend is the star of our record run.”