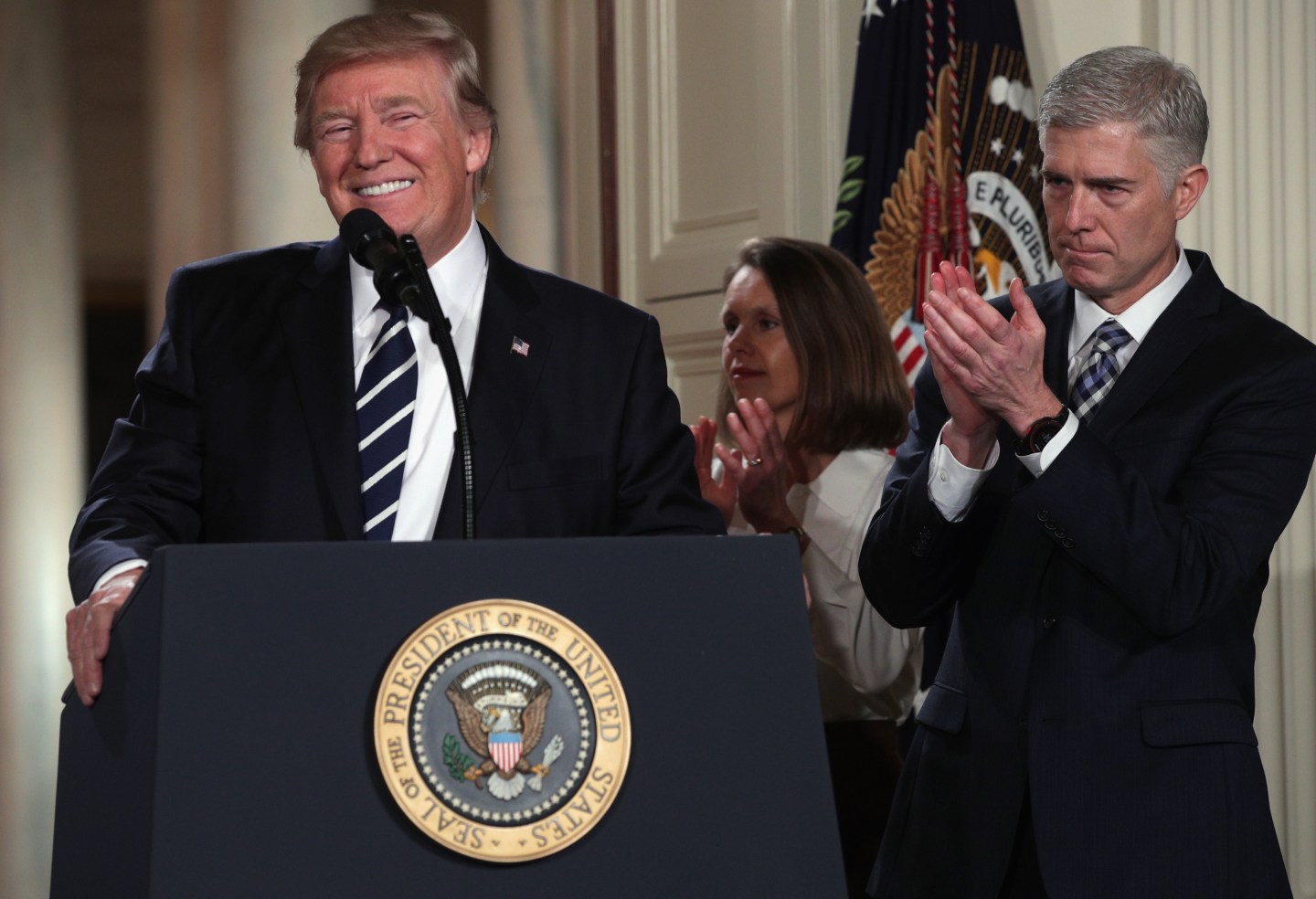 This week, for the fourth time, President Donald Trump attacked the credibility and authority of the federal judiciary because he did not like them opposing him. But this time, a judge returned verbal fire, and it was the president’s appointee to the Supreme Court, Judge Neil Gorsuch.

In criticizing the man who appointed him, Gorsuch took an unprecedented step. Knowing that his words—calling Trump’s attack “demoralizing and disheartening”—would almost certainly be reported to the press, the judge’s response demonstrates courage. Regardless of whether it might affect his confirmation vote (it seems likely to have improved Democrats’ opinion of him), one has to wonder if such a comment might so vex the sensitive president that Gorsuch’s nomination could be withdrawn.

But there are much larger constitutional stakes here. By speaking in this manner, Gorsuch has taken the next step in what could be a titanic battle between the president and the federal judiciary over the constitutional separation of powers. The fear is that Trump might choose to ignore decisions by the federal courts if he doesn’t like what they decide.

Trump’s disdain for the courts first became apparent during the presidential campaign in June 2016, when he made disparaging ethnic remarks about District Court Judge Gonzalo Curiel, who was presiding over two cases dealing with Trump University. The following month, after Justice Ruth Bader Ginsburg criticized then-candidate Trump, he tweeted in response: “Her mind is shot – resign!” and “Big mistake by an incompetent judge!” Then earlier this month, after his executive order banning immigration from seven mostly Muslim countries was blocked by District Court Judge James Robart, Trump tweeted “the opinion of this so-called judge, which essentially takes law-enforcement away from our country, is ridiculous and will be overturned!”

This week, Trump took his attack a step further. Even before the 9th Circuit Court of Appeals upheld unanimously the temporary restraining order halting implementation of the executive order, the president called the proceedings “disgraceful” and added that “courts seem to be so political.” He has since tweeted, “SEE YOU IN COURT, THE SECURITY OF OUR NATION IS AT STAKE!”

Trump’s latest attack on the federal judiciary came at an interesting time—while his nominee to take a seat on the highest federal court was doing a round of courtesy visits to the senators who will decide his fate. Both Democratic Senate Minority Leader Chuck Schumer and Sen. Richard Blumenthal reported that Gorsuch criticized Trump in private meetings. The following day, after Trump tweeted that Blumenthal was misrepresenting Gorsuch’s words, Republican Sen. Ben Sasse said the judge was “pretty passionate about” defending judicial independence, adding that he had said, “any attack on … brothers and sisters of the robe is an attack on all judges.”

History is replete with examples of presidents threatening the Supreme Court’s independence. In 1832, confronted by a Supreme Court decision upholding the treaty rights of Cherokee Indians to disregard Georgia laws seeking to acquire their land, President Andrew Jackson is reputed to have said, “John Marshall has made his decision, now let him enforce it.” In 1861, Chief Justice Roger Brooke Taney said only Congress, not the president, could suspend habeas corpus, despite President Abraham Lincoln having done so at the beginning of the Civil War. The president refused to obey Taney’s order. In 1904, when Justice Oliver Wendell Holmes voted against trust-busting President Theodore Roosevelt’s efforts to break up the railroad monopolies, the president said, “I could carve out of a banana a judge with more backbone than that.” In 1937, Chief Justice Charles Evans Hughes wrote a letter to the Senate that helped to scuttle President Franklin Roosevelt’s legislative proposal to pack the Supreme Court with up to six pro-New Deal justices.

The best historical analogy to the current incident, though, comes from 1974, when President Richard Nixon declared that he would only obey a “definitive” ruling by the Supreme Court regarding turning over Oval Office tapes subpoenaed during the Watergate scandal, implying a simple majority would not be sufficient for him to obey. The court’s unanimous decision was lauded by former Chief Justice Earl Warren, then on his death bed, who told former colleague, Justice William Brennan, “If you don’t do it that way, Bill, it’s the end of the country.”

Gorsuch’s commitment to judicial independence in a separation of powers system, regardless of one’s opinion about his ideological views, seems to prove that he will defend the Constitution as he sees fit, free from presidential influence. It is now Chief Justice John Roberts’ turn to enter the fray. He can no longer be the umpire calling “balls and strikes” that he described in his confirmation testimony. Instead, like his mentor, Chief Justice William Rehnquist, a stout defender of judicial independence, the time has come for Roberts to defend the judiciary by speech and letter.