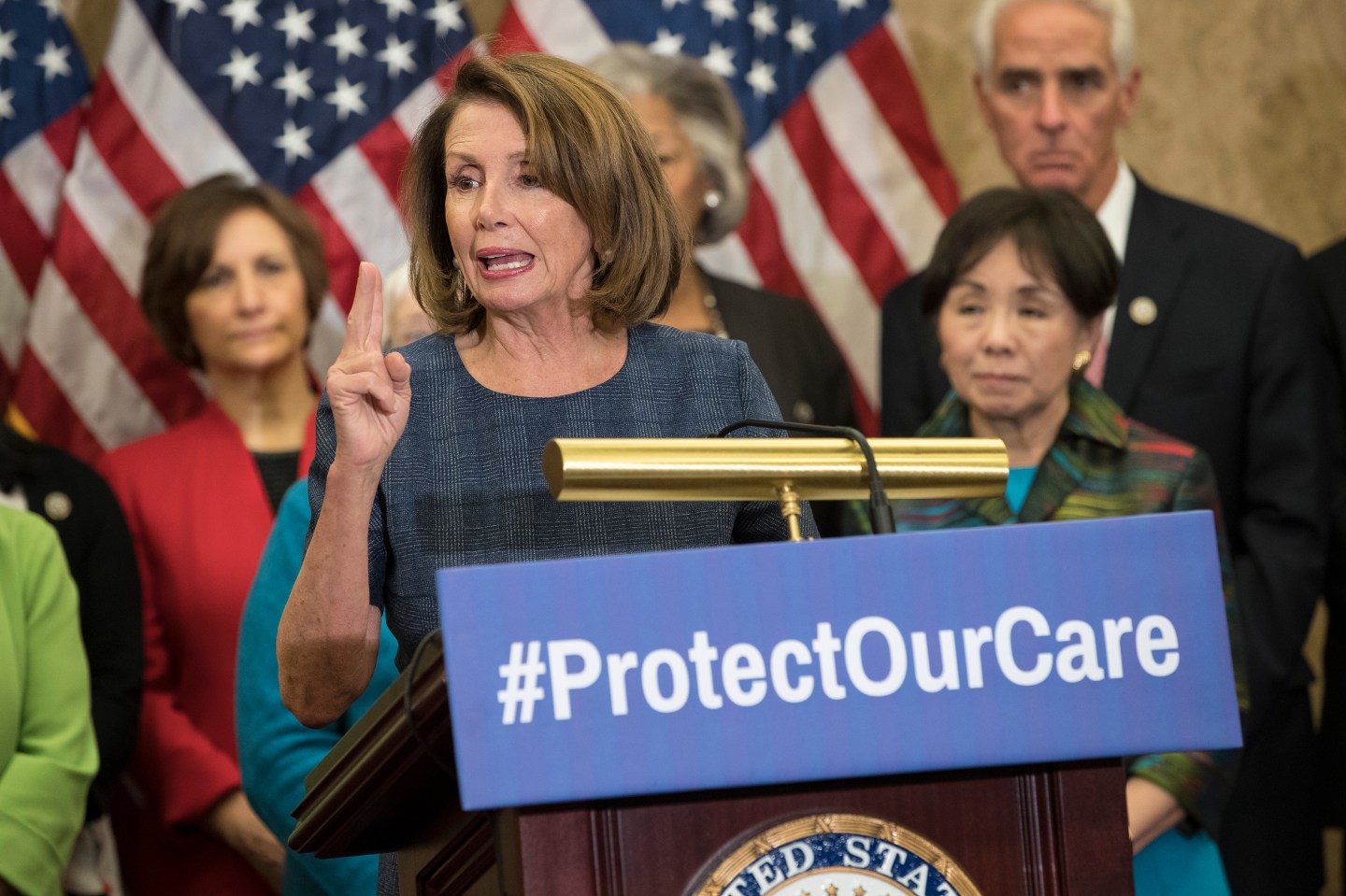 Passionate protests against Donald Trump’s presidency have swelled the ranks of Democratic activists, but their new enthusiasm faces a hard reality: Republicans remain well-positioned to retain their grip on power in the 2018 elections.

While Republicans hold only a slim majority in the U.S. Senate, Democrats occupy most of the seats up for election in two years. That means they must play defense against Republicans, especially in 10 states that Trump won.

In the U.S. House, Republicans will be aided by favorable district boundaries that were drawn to maintain GOP political dominance. In some cases, the congressional districts were gerrymandered to pack high numbers of Democratic voters into just a few districts as a way to create a greater number of Republican-leaning seats.

“Democrats are extremely fired up right now,” said Sam Wang, a Princeton University neuroscientist and statistician who has developed a statistical model for analyzing partisan gerrymandering.

But for Democrats to win back Congress, Wang said it “would take an extreme event. The question is, are we seeing something that’s headed towards that?”

The Democratic Congressional Campaign Committee is targeting 59 Republican-held House seats in 24 states as it builds toward the next election. Those include 23 districts where Democratic presidential candidate Hillary Clinton defeated Trump and various others that Republicans took away from Democrats in recent years.

It also is beginning to place full-time paid organizers in 20 of those districts, something the committee says it has never done at this early stage.

The Democratic committee is touting a surge of 675,000 new supporters in January, many of whom joined the cause amid nationwide protests against Trump’s policies. Whether that energy can be sustained through 2018 remains to be seen.

Trump Seeks an Ally, or At Least an Ear, in West Virginia Democrat

Democrats would appear to have history on their side. The president’s party has lost ground in Congress in all but two of the initial midterm elections since the Civil War. The exceptions are 1934, when President Franklin Roosevelt was guiding the country through the Great Depression, and 2002, when President George W. Bush was leading the response to the 2001 terrorist attacks.

In the 2010 election during the middle of President Barack Obama’s first term, Republicans flipped more than five dozen seats to take control of the U.S. House away from Democrats. Republicans also won control of a majority of state legislative chambers and governors’ offices that year.

They then used that statehouse power to help cement their control in Washington by redrawing congressional districts following the 2010 Census.

In 2012, the first election under those new maps, Republicans won a 33-seat majority in the U.S. House even though Democratic candidates across the country received 1.4 million more votes than their Republican opponents.

Although court rulings have since forced the redrawing of some districts, many of those boundaries remain in place for the 2018 elections.

Wang estimates Democratic congressional candidates would need to win the 2018 nationwide vote by 7 to 12 percentage points to capture enough seats to win control of the House. The last time Democrats enjoyed such a spread was 2008, he said.

But circumstances have changed since then.

“There are just more districts at the moment that have a natural tilt toward Republicans, partly because of Democratic geography and partly because of Republicans drawing districts with an eye toward helping pick up more seats for their party,” said Michael Barber, an assistant political science professor at Brigham Young University who has studied the effects of gerrymandering and incumbency on congressional elections.

Former Attorney General Eric Holder recently signed on as chairman of the new National Democratic Redistricting Committee, which is attempting to better position Democrats for the 2021 redistricting by winning key statehouse races and court cases in the coming years.

“There’s a lot of work to be done,” said Iowa-based Democratic consultant Jim Kottmeyer. “Redistricting is a real problem, but the bigger problem is frankly that Democratic votes are just way too concentrated in too small of geographic areas” — big cities, instead of America’s many small and mid-size towns.

Lack of Latinos in Trump Cabinet Draws Ire for ‘Setback’

The realities of the electoral map have tempered the optimism of some newly invigorated Democratic activists.

Since Election Day, Philadelphia physician Rhea Powell has marched with other women in Washington, protested in her home town against the potential repeal of Obama’s health care law and joined in airport demonstrations against Trump’s immigration restrictions. She has even enrolled in a program that trains potential Democratic candidates.

But she also understands that victories may be difficult, at least in the near term.

“I am worried that because of the impact that gerrymandering has had on many of the districts that it may be hard to make big changes” in the 2018 elections, Powell said.

Other new activists believe it’s possible to win even with unfavorable districts.

Sanders Backers Look to Sway Democratic Politics From Inside

“I think there’ll always be barriers … (but) we’re not just going to sit back and shake our head and say, ‘OK, well, I guess that’s it,'” said Mary Clauss, a small business owner from suburban Chicago who recently marched in Washington and now is organizing other women in her community.

Ironically, Democratic chances for huge congressional gains may depend on Trump’s success at enacting his agenda. The Republican wave in 2010 was fueled by voter backlash against Obama’s policies, headlined by the health care law that quickly became known as “Obamacare.”

“Politicians sometimes think that they made promises and their voters want them to keep them, but the historical pattern is the opposite — that public opinion moves against the direction of policy change,” said political scientist Matt Grossmann, director of the Institute for Public Policy and Social Research at Michigan State University.