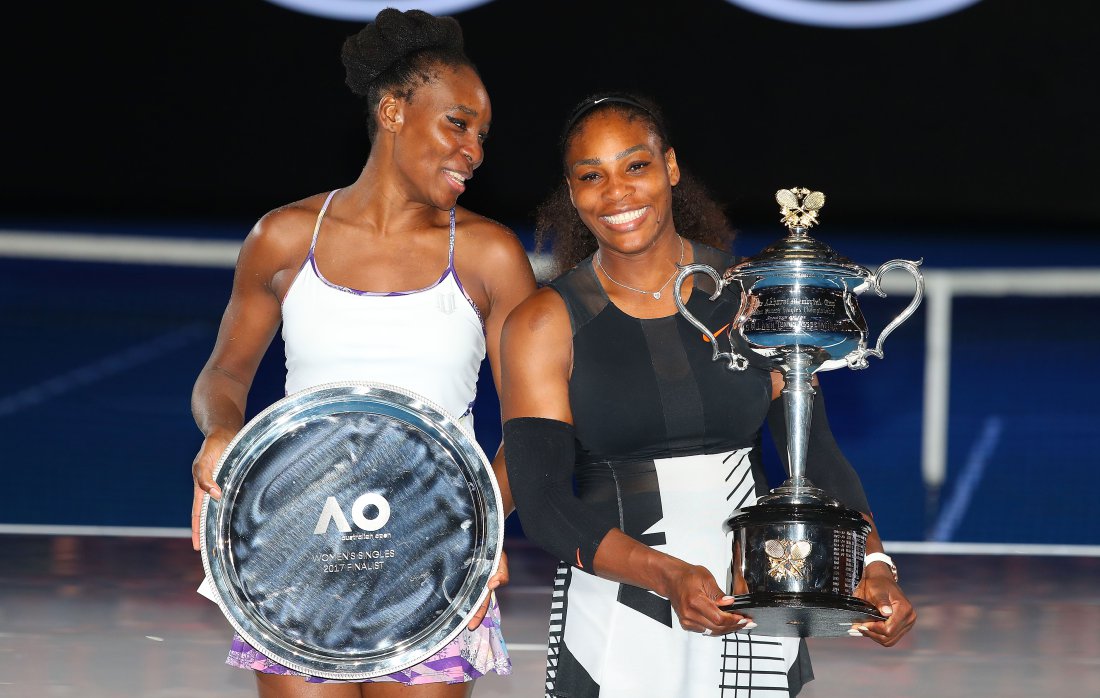 MELBOURNE, AUSTRALIA - JANUARY 28: Serena Williams poses with the Daphne Akhurst Trophy after winning the Women's Singles Final against Venus Williams of the United States, posing with the runners up trophy on day 13 of the 2017 Australian Open at Melbourne Park on January 28, 2017 in Melbourne, Australia. (Photo by Scott Barbour/Getty Images)
Scott Barbour Getty Images

“You fight!” Serena Williams screamed to herself after reaching championship point at the Australian Open final on Saturday, while facing her older sister, and idol, Venus. “You fight!” Quite fitting that, one week after women throughout the world took to the streets to assert their rights and express their voices, one of the most inspiring athletes of all-time would shout these words.

Serena would know. Since emerging from the streets of Compton to crash a county club sport, she and her sister have fought racists tropes, fought doubts about their commitment to tennis, and in recent years, fought the effects of age, which eventually vanquishes all practitioners of tennis, a grinding game. But here were Serena, 35, and Venus, not only 36 but also having beaten a debilitating autoimmune disorder, battling for the Aussie championship, their combined age the oldest ever for a Grand Slam final. And here was Serena — “You fight! You fight!”— just one point away from making more history.

What Female Executives Can Learn From Venus and Serena Williams

About a minute later, the match was over. Serena finished off Venus, 6-4, 6-4, giving her a seventh Australian Open title, returning her to the world No. 1 ranking, and most importantly, winning her a 23rd major championship. With the victory, Serena broke Steffi Graf’s record for most Grand Slam singles titles in the Open era. (Before 1968, only amateurs could compete in the major tournaments). Serena’s loathe to discuss milestones during big tournaments. After she won the first three majors of 2015, the media hounded her about finishing off the calendar-year Grand Slam at that year’s U.S. Open. Graf last pulled off a Grand Slam in 1988. Serena lost in the semis. Fans desperately wanted her to win her 23rd major in America, at last year’s Open. She fell in the semis again.

She kept telling herself that 22 Slams wasn’t too bad. But now that she had clinched the record, Williams let loose. “I really wanted to get to 23 so bad,” Serena told ESPN after the match. “More than you can ever imagine.” Such drive explains why Serena smashed her racket early in the match, during the third game of the first set. She slipped, lost a point, and pounded it against the Melbourne hardcourt. She wasn’t giving in to anyone, not even her best friend. Her crumpled Wilson, discarded to the sideline like crushed soda can, now symbolized her ferocious will to break new sports barriers.

After the match, the sisters put their love on display. “That’s my little sister guys,” Venus told the crowd upon receiving her runner-up prize. “Your win has always been my win,” she told Serena. For her part, Serena’s always been awed by Venus, especially after Venus was diagnosed with Sjorgen’s Syndrome more than five years ago. Serena has said that such bad fortune likely would have worn her down. She’d probably feel sorry for herself, ask “why me?” But Venus never wanted at pity. Serena credits her own late-career bloom — she’s won 10 majors since turning 30 — to Venus’ example. If sickness didn’t beat down Venus, what was Serena’s excuse for not putting in the work? After the match, Serena told Venus she’s “the only reason I’m standing here today.”

And Serena’s not done. Margaret Court holds the all-time record for Grand Slam singles titles in any era, with 24. Serena’s has nothing left to prove. She’s the greatest ever. But she may as well pass Court and completely rewrite the record book. Serena’s still the strongest player in the world. Fight on.