The Head of Samsung Faces a Long Day in Court Wednesday 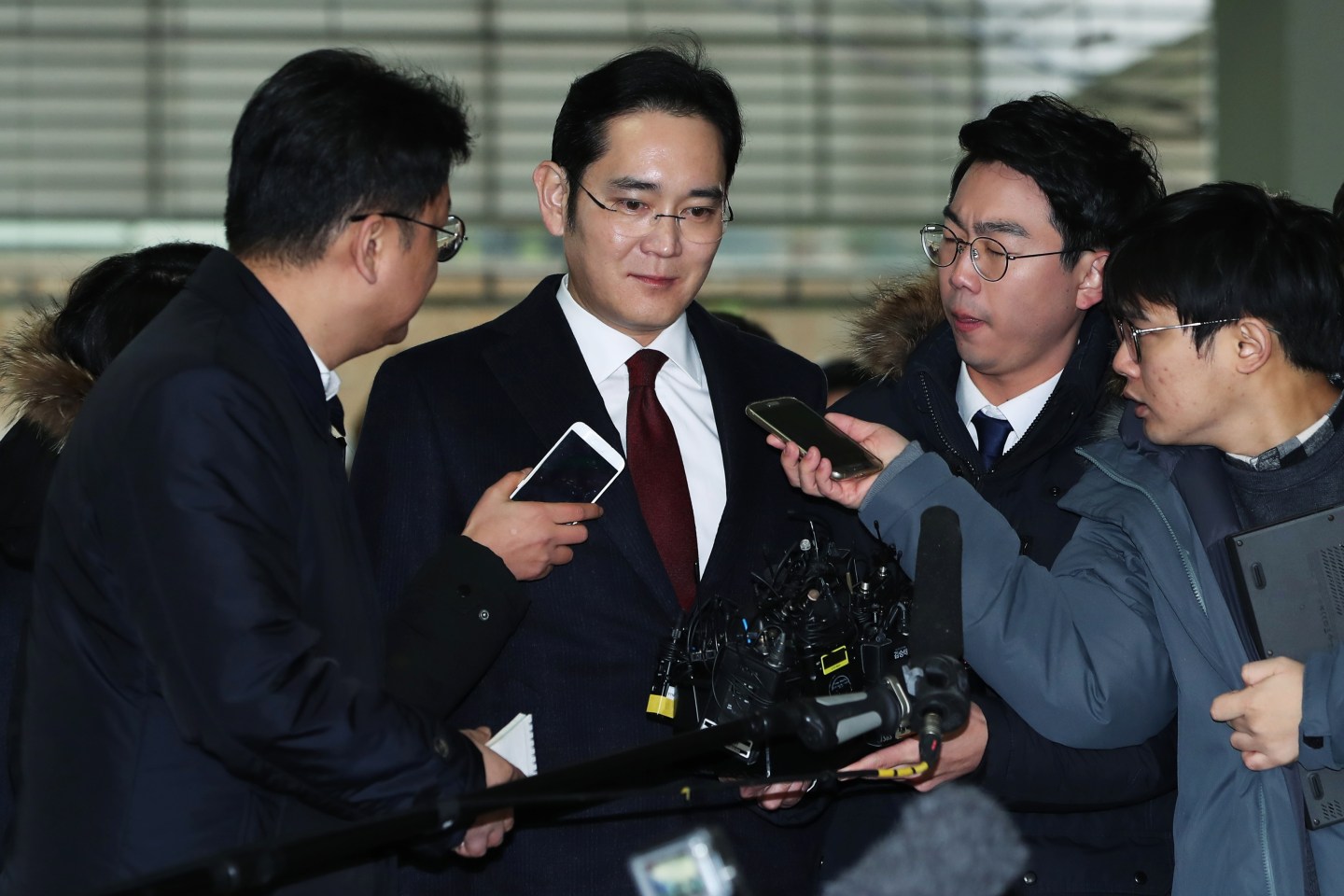 Jay Y. Lee, co-vice chairman of Samsung Electronics Co., center, is surrounded by members of the media as he arrives at the special prosecutors' office in Seoul, South Korea, on Thursday, Jan. 12, 2017. Special prosecutors began questioning Lee on Thursday as a suspect in a bribery investigation, deepening an influence-peddling scandal that has already led to the impeachment of South Korea's president. Photographer: SeongJoon Cho/Bloomberg via Getty Images
SeongJoon Cho/Bloomberg via Getty Images

The head of South Korea’s giant Samsung Group faces a long day in court on Wednesday as a judge decides whether he should be arrested for bribery in a corruption scandal that has engulfed President Park Geun-hye’s administration.

Investigators questioned Jay Y. Lee for 22 hours last week as a suspect in the scandal which led to parliament impeaching Park in December and throwing the country into crisis.

Park, 64, remains in office but has been stripped of her powers while the Constitutional Court decides whether to make her the country’s first democratically elected leader to be forced from office.

She is likely to undergo “face-to-face” questioning by early next month, the special prosecutor’s spokesman said.

The prosecutor’s office has accused Lee, 48, of paying bribes totaling 43 billion won ($36.55 million) to organizations linked to Choi Soon-sil, a friend of the president who is at the center of the scandal, to secure the 2015 merger of two affiliates and cement his control of the family business.

Lee, who has denied wrongdoing, is also accused of embezzlement and perjury. Lee’s lawyer could not be reached for comment on Tuesday.

Seoul Central District Court will hold the hearing to decide on his arrest warrant. A court official told Reuters that Lee and his lawyer would attend the hearing.

A spokesman for the special prosecutor’s team said Lee would then be held in detention until the court had made its ruling.

“A judge’s examination of a suspect normally finishes in 30 minutes at the earliest, but can take longer than two hours for complicated matters, which is likely to be the case,” the court official said.

“Then, after the examination, the judge goes back to his office to review records and evidence and deliberate arguments of the prosecution’s side and the suspect’s side,” said the official, who declined to be identified due to the sensitivity of the matter.

“A final decision is more likely to be made at dawn on Thursday, as there are tons of records, evidence and lots of things to review.”

WORRIES ABOUT THE ECONOMY

There is a long history in South Korea of convicted bosses of family-run conglomerates, known as “chaebol,” being released or having their sentences suspended, raising doubts among investors seeking tighter corporate governance.

Lee can apply for bail or appeal if the court grants the arrest warrant.

Kim Kwang-sam, a former prosecutor who is currently in private practice, said public emotion weighs heavily when making decisions in such high-profile cases.

“The case is big and there is still enormous anger toward the Choi Soon-sil scandal, so it can be difficult for the court to release Lee on appeal,” Kim said.

Lee Kyu-chul, a spokesman for the special prosecutor, said Park would be questioned by early February.

“I cannot comment specifically on the timing of a face-to-face investigation of the president, but I believe it will need to happen by no later than early February,” he told reporters.

“The president has said she would submit to face-to-face questioning, but if she refuses to comply there is no realistic way to force it.”

Choi, the president’s long-time friend without any government title, is in jail on trial for abuse of power, attempted fraud and bribery. She has denied wrongdoing.

She has also been accused of meddling in state affairs using her personal connections, even, according to media, of exerting her influence to choose a new, unpopular police uniform which bleached in the wash.