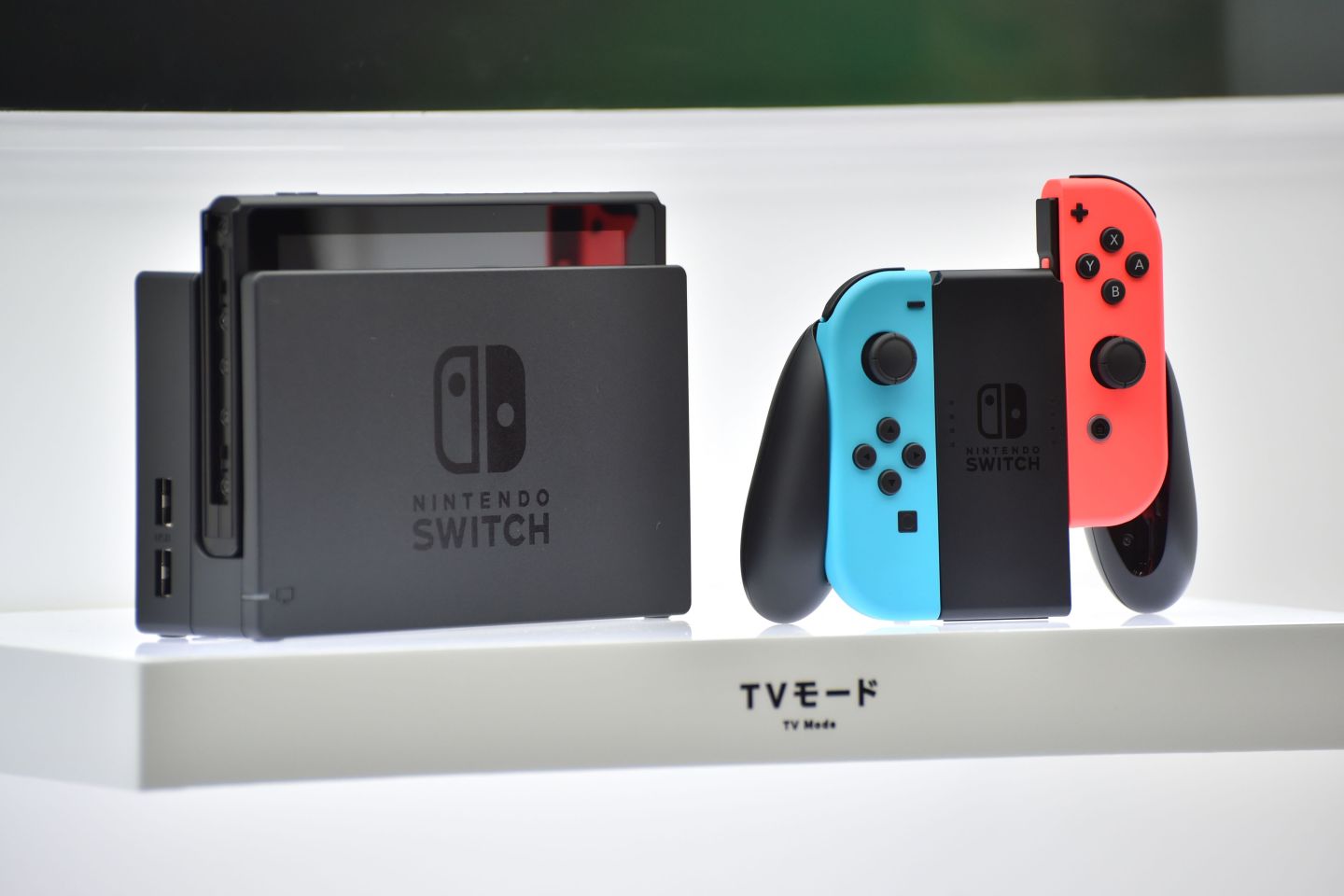 The Nintendo Switch feels like the move Nintendo should have made five years ago. You’re going to hear that a lot, mostly because it’s true, or at least feels true off initial impressions less than two months from launch.

There’s reason to be skeptical, of course. Start with Wii U, Nintendo’s worst-selling console if you’re not counting the 1977 Japan-only Color TV-Game. And it’s 2017, not 2006 — mobile gaming is ubiquitous, baked into platforms most carry around whether they identify as gamers or not.

But there’s also no denying Switch looks an awful lot like the robust all-in-one handheld pundits, critics, cranks and apologists alike have been nipping at Nintendo’s heels about for years. And there just might be a market for the thing: Nintendo’s 3DS handheld has soared to 60 million units sold worldwide despite the smartphone-tablet invasion.

With Switch, Nintendo’s making the case for a spectrum of experiences phones and tablets don’t offer. But what about third party support? Online services? Its target audience? Next-gen Wii controls?

We asked Nintendo of America (NTDOY) President Reggie Fils-Aimé these questions and more.

TIME: So I can guess based on the marketing videos, but in your own words, who is Nintendo Switch for?

Reggie Fils-Aimé: Just like every system Nintendo creates, we believe in having a very wide footprint, and we are experienced enough in this industry to know that the footprint changes over time. We believe that by [next holiday season], with the launch of Super Mario Odyssey, that the footprint for Nintendo Switch will be very broad. Kids, young adults, parents, gamers will occupy that footprint.

I was a Zelda fan before I was a Nintendo employee, and I can tell you that as I’ve experienced that game, it just gets me more and more excited to play. 1-2 Switch is a party in a box. And so that is going to be an all family type of experience that will then broaden the footprint. And then Mario Kart 8 is going to expand it even further. And so that’s what I see happening. A game like Arms will have a diverse footprint. A game like Xenoblade Chronicles 2 will be much more narrow.

And so, I think it’s the best way I could describe how the consumer base for Switch is going to evolve over time. And certainly by the end of our first full year, it’ll be kids, young adults, parents and gamers occupying that footprint.

The games we played at the press event feel very core gamer focused.

Yeah, and I read some of the same feedback from the video we launched in October. And it’s absolutely true, the actors we had were all young adults. And people suddenly read into it that Nintendo is abandoning the family market with Nintendo Switch.

Furthest from the truth, so again, we believe that our systems need to be mass market systems, from 5 to 95. A broad footprint. But each game is going to appeal to a certain part of that demographic. And it’ll fill out the base. That strategy continues. This is a system for everybody. This is a system that will appeal to a wide group. It’s going to get filled in over time as the different games come in.

Some of these Wii-like iterations, especially the new “high-def” haptic feedback and object scanner . . . Is Switch a stealth delivery system for another kind of demographic? So core gamers pick up Switch for Zelda or Mario, then bring it home or wherever and break out the party games like 1-2 Switch or Snipperclips…

What you’re framing is true. And what I mean by that is, Nintendo Switch is a system that we believe every consumer will be able to find satisfaction. It’s the type of experience, that with certain games is quite easy to pick up and play. Other games, incredibly deep.

We believe that there is a top value to this proposition, that players will want to share. And we believe that as a platform holder and first party developer, as we seed this concept, we believe we will create a very robust environment for third party development. Which will continue to provide more and more experiences for consumers. That’s the goal. That’s the play. And in fairness, that was the play with Wii U as well.

I would argue that the difference is, we are doing a much better job in clearly articulating the Nintendo Switch proposition. And we are also working hard to have this continuous steady cadence of games, that in the end Wii U did not have. We planned for it, but development shifts and things get delayed and the end result — which is the only thing that matters, was that we had gaps in our lineup and that slowed down our momentum.

Nintendo has pointed to 80 third party Switch games in development. Given similar messaging around the Wii U, how do you reassure a nervous public that you’re covered this time?

I think in all candor, as executives, we can only say so much, and then the consumer believes or doesn’t believe. However, if the question is Nintendo first party development, I can say that our pipeline is quite robust, in what we are working on and that we will deliver next year and early into the year after that. We have that visibility in our pipeline.

From a third party perspective, I don’t want to oversimplify things, but third party developers look for a handful of things. First, they look for a straightforward development environment in order to create their games. And that was one of the challenges with Wii U. Now with Nintendo Switch, we have Unity as a platform. We’ve got the Unreal Engine as a platform. These are known development environments for content creators to build content.

The second thing they look for is a consumer demographic that’s going to meet their needs for the content they’re creating. And so again, you’ve got Zelda for the core. You’ve got 1-2 Switch for the family audience. You’ve got Arms. You’ve got Splatoon. You’ve got Mario Kart 8. You’ve got Super Mario Odyssey. That looks like a pretty wide and diverse audience to build content for.

And third, they look for a large install base. That’s what we’re trying to create.

And then lastly, they look for a full range of ways to monetize their investment. And that’s where having a robust online environment comes in. And again we are pushing the envelope, we’re doing things differently, and we’re working hard to make sure that environment exists. So as an executive for the company, I believe we’re doing everything we need to, to create that environment for third parties. So far they’re reacting extremely positively. Bethesda hasn’t been on a Nintendo platform. A fully featured FIFA, that has not been on a Nintendo console in some time.

Is it a challenge to get developers thinking about motion control or haptic design in games again, or did the Wii embed the grammar?

And so you know, from my perspective, what I want is the best content that third party does today. And I want the best content that they’re thinking about in the future. I’m not asking them to create games that are like the games that we would create. Because that doesn’t broaden the footprint, and doesn’t bring new consumers in to our proposition.

Thinking about online gamer profiles and achievements and legacy content purchased online, will Switch include a meta layer that follows players around and lets them keep those purchases?

First, there is much more that we will be sharing about our subscription service—the mechanics, the types of content that you’ll get access to, free, on a monthly basis, the price point for the overall service. All of that information will come.

Second point, as you know, we are very aware of what the consumer has articulated to date as to what they want. We are very aware of what our competitors do. The way Nintendo thinks about it, is we want to make the consumer happy, and we want to give them some of the elements that they have been asking for. And we want to give them things that they haven’t even thought of to ask. But, we also believe in differentiated experiences. We believe in doing things differently.

And so our overall proposition will not look the same as our competitors. But what we will do, is we will recognize what consumers like about our competitors, we will look to do it in a way that has a Nintendo flair to it. And we will look to make sure that in the end, we’ve got this robust, online environment that not only works well for our games, like Splatoon and Mario Kart and Smash Bros., but that also works great for our third party developers.

Mr. Iwata once said of the Wii that he wanted it to be “something that you turn on right after turning on the TV.” Do you still think like that?

I would say that our thinking has evolved, in that we envision the consumer having a direct experience with our intellectual property (IP) as the core foundation of the company. Meaning, I want you to love what you’re doing with Zelda, with Animal Crossing, with Smash Bros. Nurturing that love for the IP is the overarching objective.

Was Wii U a necessary failure?

I don’t recall who said it but, one of our executives said something similar — I think it might have been Mr. Miyamoto, the last time he was here in New York, where he made the comment “I hope consumers look back at Wii U as a necessary step, in order to get to Nintendo Switch.” Which is another way of saying what you did.

And it’s interesting, you know, as consumers think back, the fondness and the memories shift. I joined the company as GameCube was ending its life. And as we look at the install base of the platform, certainly it’s not one of our higher install base platforms. And yet it seems the talk now is all about how consumers are hoping that there’s a GameCube virtual console, which I just find interesting.

But yes, you can look at Nintendo Switch and certainly see a lineage, not only to Wii U, but as our Switch presentation highlighted, really to so many of our historical platforms. And there is certainly no mistake in that.

Do you worry in light of mobile’s ascent that the market’s become too mercurial for these kinds of systems?

The marketplace is absolutely mercurial. But what I love about our company is that we create a vision, and then we go all in. When we launched the Wii, I mean again, people look back and say “100 million units, it was easy!” Believe me, I was there, and it wasn’t easy at all. We had tough conversations, internal debate, like “How are we going to do this? How are we going to bring it to life? What are we going to do?” And what I would say is that we made a lot of smart choices and we were lucky.

And that is the Nintendo history. We make smart choices, and we are oftentimes lucky. The decision to hire Mr. Miyamoto — we were lucky. The decision by Mr. Miyamoto to create Donkey Kong as a replacement to an arcade game that was failing in the marketplace was on one hand brilliant, to ask him to do it, but we were lucky that it was Donkey Kong, and that it was successful. What we are working hard to do, is to make smart choices with Nintendo Switch, and once again be fortunate that the marketplace responds in a positive way.