Justin Bieber’s ‘Missing’ Ferrari Is Up for Auction This Week 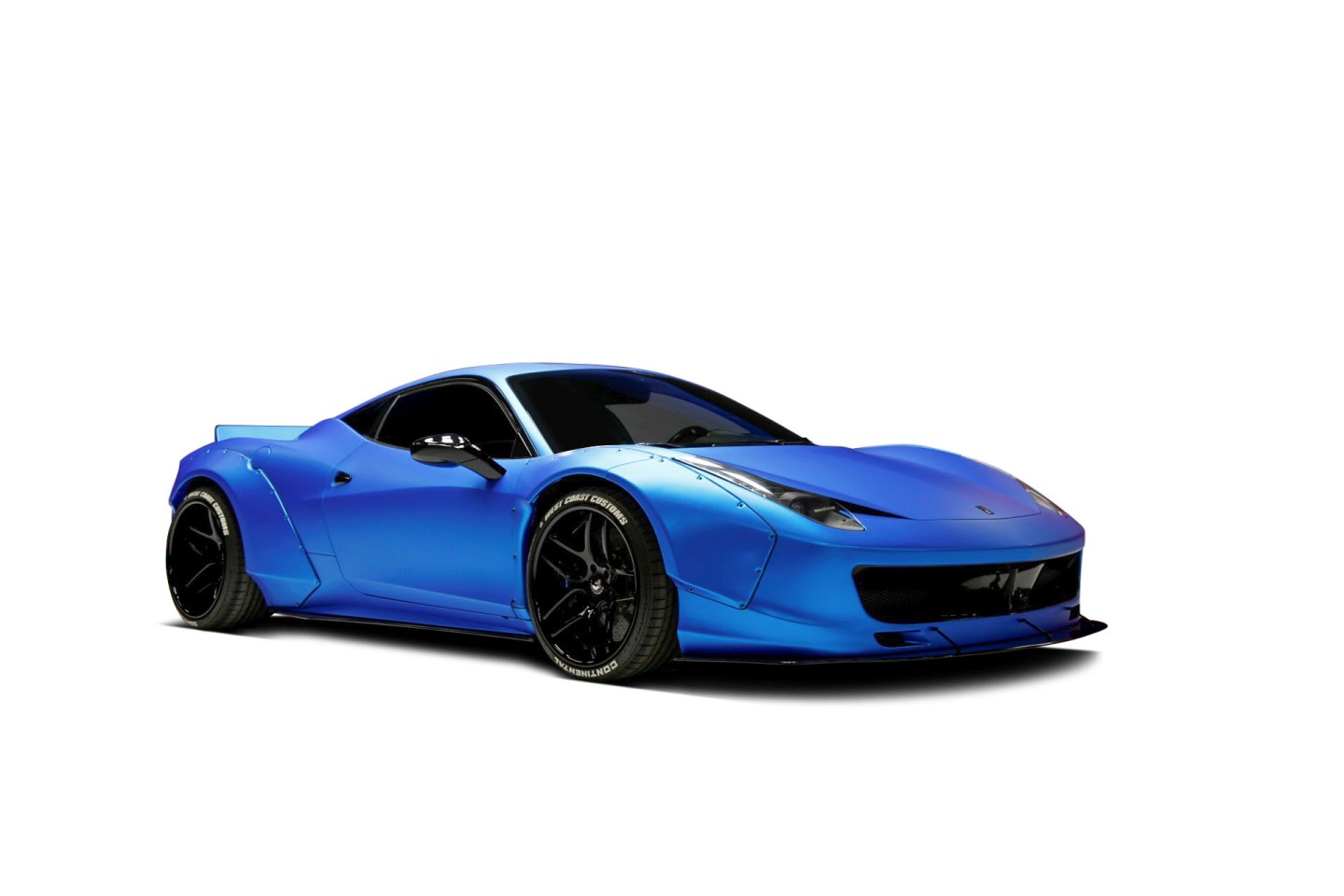 Celebrities and vintage automobile lovers will gather in Scottsdale, Ariz. this week for the classic car industry’s biggest event—the 46th annual Barrett-Jackson Auction, which runs through Sunday, January 22. The 8-day affair began this past weekend with polo matches and runs through next weekend with an Arabian horse show, a first for the event, which draws more than 300,000 car aficionados each year.

This year, Barrett-Jackson will auction off more than 1,700 classic cars, all but 14 of them at no reserve. According to CEO Craig Jackson, whose father founded the auction company in the 1960s, the “no reserve” policy was instituted in 2005 after a number of cars didn’t sell. “Having no reserve creates a frenzy,” Jackson said. “Bidders will typically sit on their hands until they know the car is actually for sale. We’re in the mindset that we want to keep the cars on the money.” Last year’s auction brought $105 million in sales.

Some of the hottest vehicles on the block in the coming week include Steven Tyler’s 2012 Hennessey Venom GT Spyder, Justin Bieber’s 2011 Ferrari 458 Italia F1, and a 1978 Pontiac Firebird Custom Coupe owned by Burt Reynolds. John Lennon’s 1956 Austin Princess, featured in the 1972 Imagine documentary, will also be up for sale. The $240,000 custom-made Ferrari made headlines last fall, when Bieber famously “misplaced” it for three weeks.

On Saturday, January 21, NASCAR great Dale Earnhardt Jr. will visit Barrett-Jackson for the first time to auction two cars for charity— a 1970 Chevrolet Chevelle, which he designed in conjunction with General-Motors, as well as his 2014 Chevrolet #88 Race Car. The sale of both vehicles will benefit Nationwide Children’s Hospital.

But you don’t have to be in Scottsdale to get in on the action. Watch from home on the Velocity Channel starting Tuesday at 6 p.m. ET, or on the Discovery Channel on Saturday at 3 p.m. ET. Hopeful bidders also can preview lots and bid online via the auction’s website.

Here are 15 cars expected to be among the hottest sellers this year:

“One of the most important pieces of American automotive history, the Chevrolet Engineering Research Vehicle (CERV) 1 was developed between 1959 and 1960 by Zora Arkus-Duntov as a functional mid-engine, open-wheel, single-seat prototype racing car.”

“This one-of-a-kind Cadillac Topless Roadster features an all-steel body and is powered by a GM 350ci LS1 motor with 4-speed automatic transmission. It’s equipped with new suspension and five wire wheels, as well as unique emblems and trim. The leather interior features a custom dash and an audio system.”

“This Dart Resto-Mod was built by LexiJ, Inc/RMR Dreamcars for the Trick Flow Specialties booth at the 2016 SEMA show and was selected as a Mopar Muscle Top 10.”

“This car was built at the Chevrolet Willow Run, Michigan assembly plant on May 20, 1967, as a Granada Gold Nova SS (code GG), with a gold bucket seat interior (781). During restoration, this car was completely disassembled and stripped to bare metal. The sub frame was removed and the entire drivetrain carefully and meticulous rebuilt.”

“Dressed in Jet Black over Parchment leather, this 190SL features wide whitewall tires as well as new paint, leather, door panels, dash and carpet. All chrome and trim has been replated or replaced along with rubbers and weatherstripping. It has a detailed engine bay and an original-style primered fuel pump. All gauges have been rebuilt with new bezels installed. The paint is in excellent condition, and it is apparent that this car was garaged and meticulously maintained. The interior is excellent and equipped with all the right options. Manual transmission. From the Charlie Thomas Collection.”

“This has had a beautiful complete restoration. This FH President is equipped with an L-head Straight-8 engine with 115hp and manual 3-speed transmission. The original list price on this 125″-wheelbase car was $1,795. From the Charlie Thomas Collection.”

“This is one of 116 1969 L88s produced. This Corvette is equipped with a 427/430hp L88 with factory side pipes, and the original red line tires that came on the car. With only 16,482 original miles, this car has undergone a rotisserie restoration by Kevin Mackay of Corvette Repair. The car achieved a Triple Diamond status in 2013 with a NCRS Top Flight Award, Bloomington Gold Award and was also featured in the February 2015 issue of ‘Vette magazine. This particular car has the original engine, transmission and the rear assembly still intact, as well as all the factory fiberglass.”

“The Brass Monkey” is an incredible full custom build of a ’39 Chevy truck. It was just completed in early 2016. Its very unique style, harmoniously combining the traditional American hot rod with today’s radical car culture, truly makes it a work of rolling art. The build quality of this truck is second-to-none, highly detailed in areas that likely will never even be seen. It is a timeless design that combines artistry and craftsmanship in a motor vehicle.”

“This exceptional GT350 is presented with no missing or altered components from its build, with all of the rare Shelby unique parts from 1965 intact. Also of great importance is the rust- and damage-free original body shell that displays all of the Shelby American modifications performed in just that one year of 1965. Historical research, along with supporting documentation, reveals that SFM5S219 was completed at Shelby American Inc. in May 1965 and immediately shipped to Herb Tousley Ford in White Bear Lake, MN, for retail sale. This was always a well-kept, unmodified car, but a previous owner undertook a very comprehensive restoration in the late 1990s, returning the car both cosmetically and mechanically to like-new.”

“This beautiful 1934 Packard 2/4-passenger coupe displays a high-quality restoration completed in 2005. It was restored and then shown at the prestigious 2005 Meadow Brook Concours d’Elegance, where it won the Lion Award and Blue Ribbon. It also won first in its class at the 2005 Willistead Classic Concours d’Elegance at the Willistead Manor in Windsor, Ontario.”

“Rock and Roll Hall of Fame inductee and four-time Grammy winner Steven Tyler is selling an extremely rare Hennessey Venom GT Spyder. This rare supercar is the fifth of only 12 Hennessey Venom GTs ever created and first of the Spyder convertibles. It will cross the auction block at No Reserve, with 100 percent of the hammer price benefiting Janie’s Fund, an initiative created in partnership with Tyler and Youth Villages to bring hope and healing for many of the country’s most vulnerable girls who have suffered the trauma of abuse and neglect. The 7.0-liter V8 engine produces 1,244 horsepower that muscles the 2,743-pound convertible from 0-60 mph in 2.7 seconds and 0-200 mph in 14.5 seconds. This car also has a custom JL Audio stereo system befitting a rock and roll superstar.”

“This is #006 competition Cheetah built at Bill Thomas Race Cars in Anaheim, CA. It was ordered new in ’64 by Jack Goodman, owner of Clarence Dixon Cadillac Dealer in Hollywood, CA. It is one of 15 known to survive in the world today. This is the only Cheetah ever built and raced with the famous Corvette heavy-duty 427ci L88 aluminum-head racing engine option. Complete nut-and-bolt, museum-quality restoration by BTM LLC of Arizona. It currently has the lowest-mile 1967 genuine Corvette 427ci L88 IT-code crate engine.”