The Military Is Getting Greener, but That Clashes With Trump’s Promises 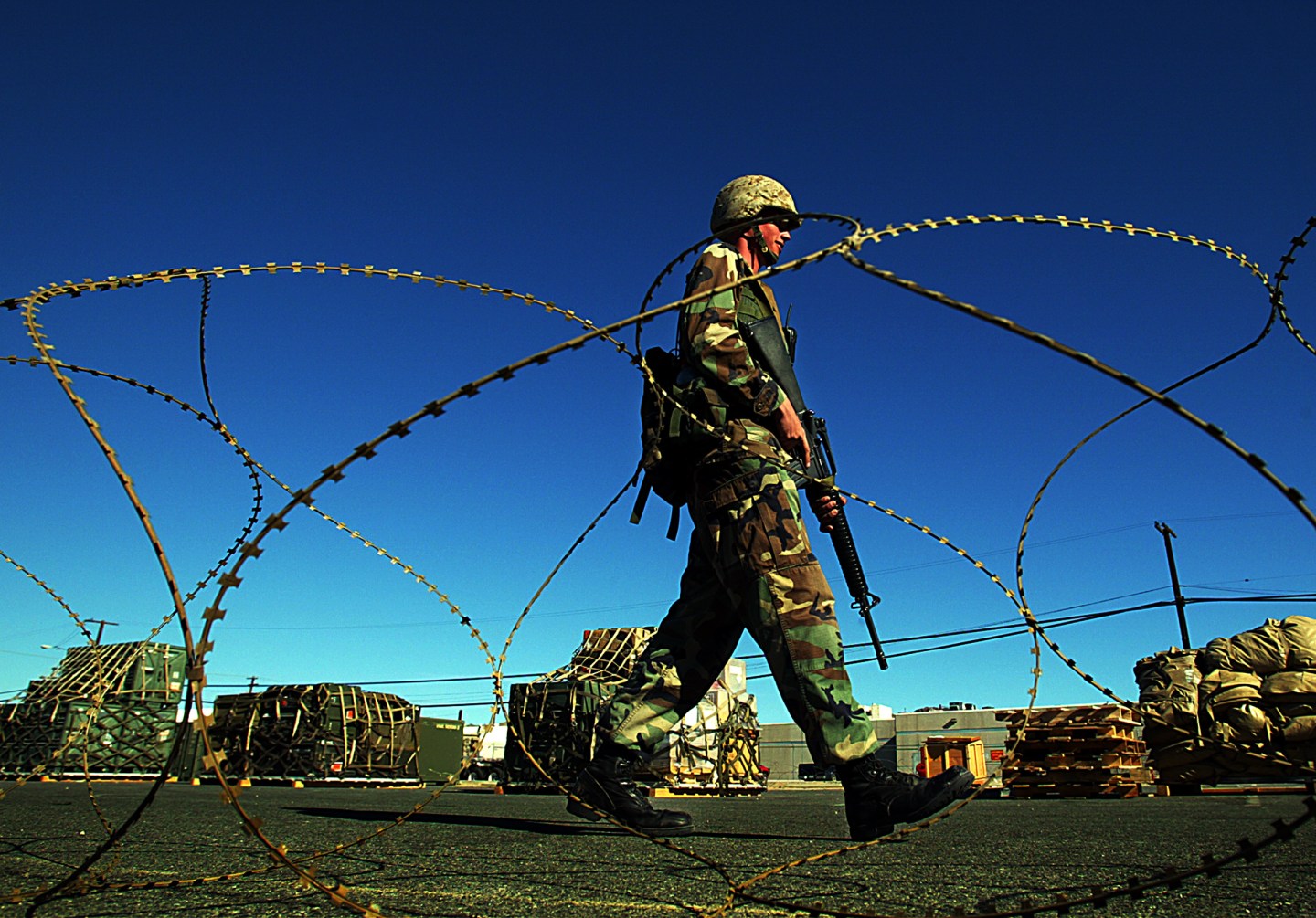 At a sprawling desert base, a Marine recharged his radio’s batteries simply by walking, while nearby fellow troops examined a rocket artillery system and a drone—both powered by the sun.

Navy and Marine Corps brass, accompanied by green energy executives, showcased the energy-harnessing knee braces and other innovations at a renewable energy demonstration at Twentynine Palms Marine Corps base, one of many such events that have taken place at military bases across the country as part of the Defense Department’s unprecedented shift away from fossil fuels under the Obama administration. The Pentagon has invested millions over the past decade into everything from hybrid electric ships to wind turbines.

While a growing number of military leaders have declared global warming a national security threat, the strategy clashes with President-elect Donald Trump’s vow to end policies that “undermine” fossil fuel producers. Trump has a chosen a Cabinet with climate change skeptics, though his pick for defense secretary, retired Marine Gen. James Mattis, has advocated green technology to curtail risky fuel-supply runs for troops in conflict zones.

It’s not known if Mattis would support buying alternative fuels for ships and aircraft, among the military’s biggest petroleum users. He didn’t respond to requests seeking comment.

Department of Defense Calls for Biodegradable Bullets That Sprout Plants

Republican lawmakers have lashed out at many of the green initiatives for the Defense Department—one of the world’s largest energy consumers—especially the Navy’s Great Green Fleet that deployed ships run partly on biofuel amid falling oil prices.

At the recent demonstrations, a Marine wore knee braces with tiny generators that transformed the energy he produced from walking to recharge batteries. The technology allows troops to generate their own power for as long as three days. The event also featured a M777 howitzer and a drone that use solar power.

“To do something other than continue these programs would be a mistake,” said Joe Bryan, the Navy’s deputy assistant secretary for energy. “My expectation is that will be recognized no matter where people are on the political spectrum.”

For more on green tech, watch:

Rising sea levels threaten Navy bases worldwide, and it would be “shortsighted” for the military not to address climate change, Bryan said.

Trump’s transition team did not respond to questions about whether it would end the strategy.

GOP legislators have criticized the Obama administration for spending roughly $120 billion on climate change initiatives while putting in motion $1 trillion in defense cuts.

“I hope the new administration allows the U.S. military to focus on the most important defense issues like fighting ISIS, defending from Iranian and North Korean belligerence, and guarding against aggression from China and Russia,” Colorado Republican Rep. Ken Buck said in a statement to The Associated Press. “Our military should use the most cost-efficient fuel sources, rather than burning money on green energy experiments.”

The ‘Circular Economy’ Is More Than Davos-Speak

The most contentious initiative has been the purchase of biofuel for ships. Critics say while ships may leave port with a biofuel mix, they still must rely on foreign oil in many places near battlefields and the plant-based fuel has become more expensive than traditional fuel.

According to a 2015 report from the Government Accountability Office, Congress’ research arm, the Pentagon paid $58.6 million for 2 million gallons of alternative fuel from 2007 to 2014, or about $29 per gallon. At the same time, it spent $107.2 billion for 32 billion gallons of petroleum, paying about $3 per gallon.

Legislators passed a law in 2012 prohibiting the Pentagon from buying biofuels in bulk unless the price is competitive with that of petroleum.

As a result, the Great Green Fleet’s carrier strike group set sail in early 2016 using a mix of 90% petroleum and only 10 percent biofuels made from beef fat. The Navy originally aimed for the ratio to be 50-50.

Solar Has Become The World’s Cheapest Form Of New Electricity

“The Obama administration found a way to make a market for biofuels within the DOD and they did that by saying it was critical to national defense, even though petroleum is not in short supply by any means,” said Rachel Zissimos, a research assistant at the conservative Heritage Foundation. “The climate change agenda within the DOD was a way to impose these renewable energy mandates on the DOD. I think the climate change issues can be dropped very quickly.”

Green energy supporters are banking on Mattis, Trump’s defense secretary choice, who helped usher in the Pentagon’s shift toward renewable energy by challenging the Defense Department to “unleash us from the tether of fuel” during the Iraq war.

Zissimos said Mattis made the challenge when problems with maintaining fuel levels hindered the advance of U.S. forces and troops were going on supply runs through enemy territory, causing casualties.

She expects Trump’s administration will support initiatives that help the military but not necessarily the planet — in contrast to Obama who was driven by combatting climate change.

“Repealing some of these programs means a part of Obama’s legacy will go away,” she said. “For Trump, that’s not a factor, so there are fewer reasons for him to hold on to failing initiatives.”