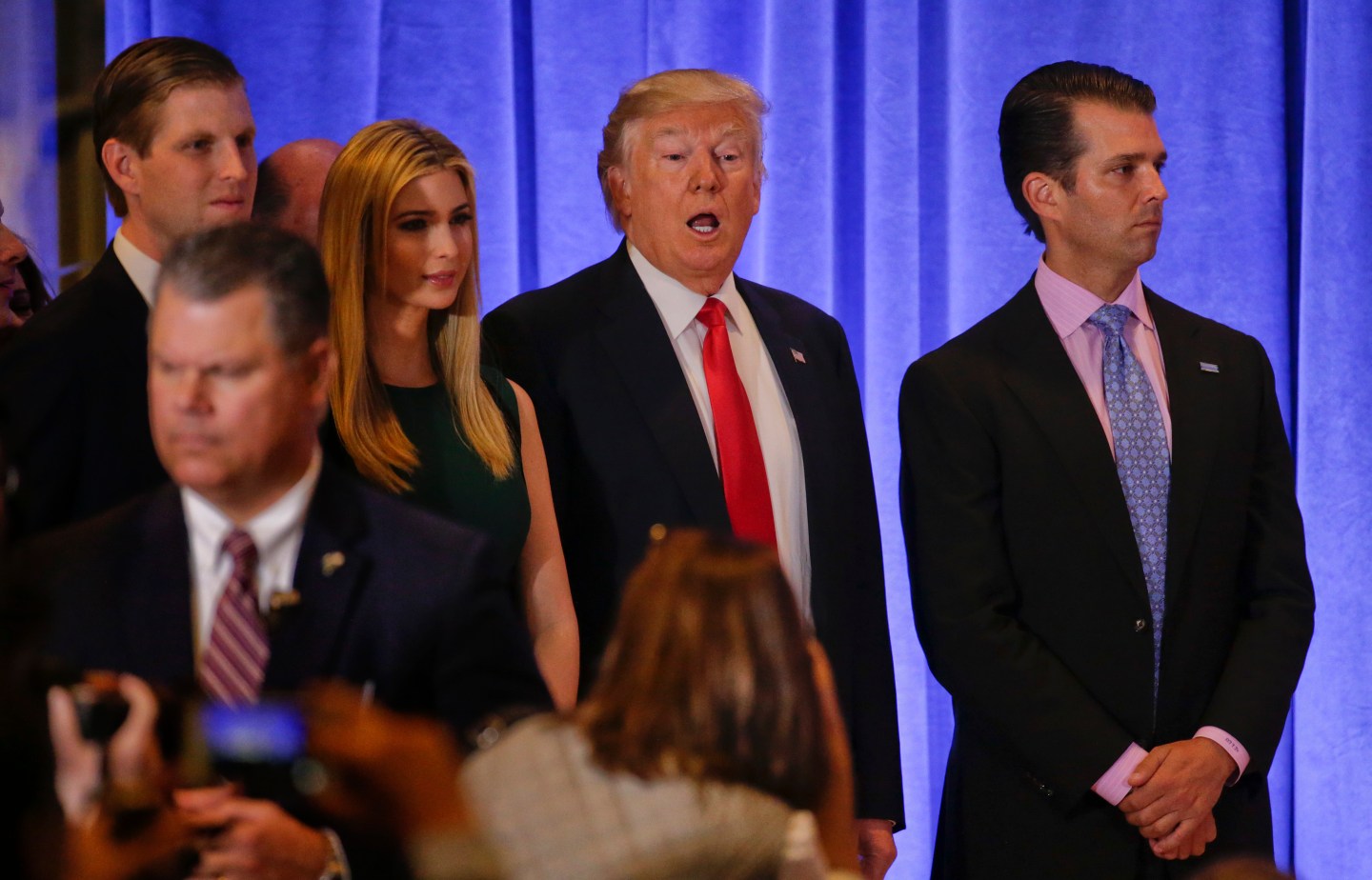 During an unusual interlude at the President-elect’s combative press conference on January 11, Donald Trump invited attorney Sheri Dillon to the podium. Dillon proceeded to outline a detailed series of safeguards aimed at totally isolating the soon-to-be president from his business empire, ensuring that he doesn’t personally profit from any policies or decisions forged in the Oval Office.

The plan’s pillar is a trust that has just been established, and now holds all of Trump’s real estate properties, as well as the cash proceeds from his stock and bond investments, all of which he says he has recently sold. But as Dillon acknowledged, this is not a “blind trust,” the classic vehicle that former presidents and other public servants employ to divorce themselves from all decisions regarding their finances.

The big difference: This trust is tailored not just to manage a big portfolio of stocks and bonds, but to allow a major real estate company to keep operating, and if it’s run well, to thrive. To that end, it won’t be controlled by an independent trustee–as stipulated in a blind trust–with authority to fire the folks managing the investments, or in rare cases, the executives running a business previously owned by the public servant.

In fact, Dillon left out a crucial point: She didn’t specify who will serve as the trustee or trustees overseeing the Trump Organization. She did state that three executives–Trump’s sons Donald Jr, and Eric, along with his veteran CFO, Allen Weisselberg–will exercise full management authority over the real estate interests and investments formerly controlled by the president-elect. Dillon, however, did not say whether that triumvirate, or whether any of its members, would serve as trustees, although that seems likely.

It is clear that the Trump management team will not answer to a trustee who’s able to remove and replace them for ethical misconduct, or for any other reason the trustee deems valid. So this isn’t a blind trust controlled by an neutral overseer, but something else entirely, a trust run by family members and a long-time lieutenant. As Dillon stated at the press conference, “You cannot have a blind trust with an operating business. It’s impossible to find a trustee who could run the Trump Organization.”

The arrangement has drawn heavy criticism. Indeed, the director of the nonpartisan Office of Government Ethics, which advises officials on avoiding conflicts of interest, has called it “wholly inadequate.” Ethics experts charge that Trump will have an incentive to make decisions that would benefit the Trump Organization, because whatever money it makes while he’s in office will once again come under his full control once he leaves the presidency. And since his kids and a loyalist are in charge, they might try to leverage political connections to make more money.

The problem: It’s not yet clear if an unimpeachable watchdog will have full authority to prevent any deals that cross the ethical boundaries.

Nevertheless, the Trump team can add crucial safeguards that would mimic a blind trust that does have a neutral party in charge. That’s the view of Matthew Sanderson, an attorney at the Washington, D.C., firm Caplin & Drysdale. Sanderson has served as outside counsel to a number of presidential candidates, including Senators Rand Paul and John McCain, and former Texas governor Rick Perry. Among his specialties is advising clients on financial disclosure and ethics issues.

Sanderson sees some good things in plan unveiled by Dillon. “This scenario is better than I expected,” he told Fortune. “The freeze on foreign deals is a good feature, for example.” Sanderson argues that selling all of Trump’s assets is not just impractical, but would raise its own conflict problems since buyers might overpay to curry favor with the new president.

Hence, he’s advocating ways to make the trust that has been proposed a lot more trustworthy.

“Trump apparently didn’t want to give up control of the Trump Organization to an independent figure he didn’t know,” says Sanderson. The Trump team, however, pledges to name an “ethics adviser” working for the Trump Organization with the authority to veto transactions that cross the line into conflicts of interest. “If the right adviser is chosen, and his authority is strong and well-defined, the arrangement would more closely approximate that of a blind trust, and remove a lot of the danger of future conflicts,” notes Sanderson.

Here are what he sees as the requirements for the ethics adviser’s resume and powers.

—The Trump team must choose a highly respected figure. “It should not be someone who’s worked for the Trump Organization for 25 years,” he says. “I would not have confidence in anyone who’s had business dealings with Trump and might buckle under to the family interests.” Instead, he recommends someone with “a sterling reputation. A good choice would be a highly-respected former circuit court judge.”

(Two potential choices favored by Fortune are Kenneth Feinberg, who most recently oversaw compensation to executives following the TARP bailout, and Richard Breeden, former chairman of the SEC.)

—The adviser’s powers must be both broad and guaranteed. Dillon has stated that the adviser will have veto power over any new deals. “But what range of transactions are included?” asks Sanderson. “Does it just applies to new investments such as hotels or office buildings, or a reshuffling of partners in an existing investment, or re-financings? All of those activities should be vetted and approved by the adviser.”

—The adviser’s job must be totally secure. Sanderson recommends that the trust ensure that the adviser cannot be removed at any time while Trump serves as president. He further advocates that his or her job protections, and the scope of the adviser’s authority in approving the widest possible range of transactions, be enshrined in the trust documents and the bylaws of the Trump Organization, and be made public.

Once again, ensuring that a highly respected figure, with total job security, must approve every decision would go a long way towards allaying fears that the president or his sons can do anything to financially benefit from the Trump presidency.

In fact, Sanderson would like Trump to go much farther, and guarantee that nothing that happens while he’s president, or after, can swell his personal wealth. “I’d like to see the new president simply take a fixed payment every year from the trust that now owns his company, both while he’s president and after he leaves office, so that he doesn’t benefit at all if its value of his businesses increases in the future,” he says. That solution would divorce Donald Trump from the real estate world forever, a fate he obviously could never tolerate. And it could leave the suspicion that his kids are still using politics to enrich themselves.

So it’s back to that crucial overseer, watchdog, or gatekeeper who’s needed to make the new trust as independent as it can conceivably be. The more prestigious and powerful the choice, the better for the Trump presidency, and for America.