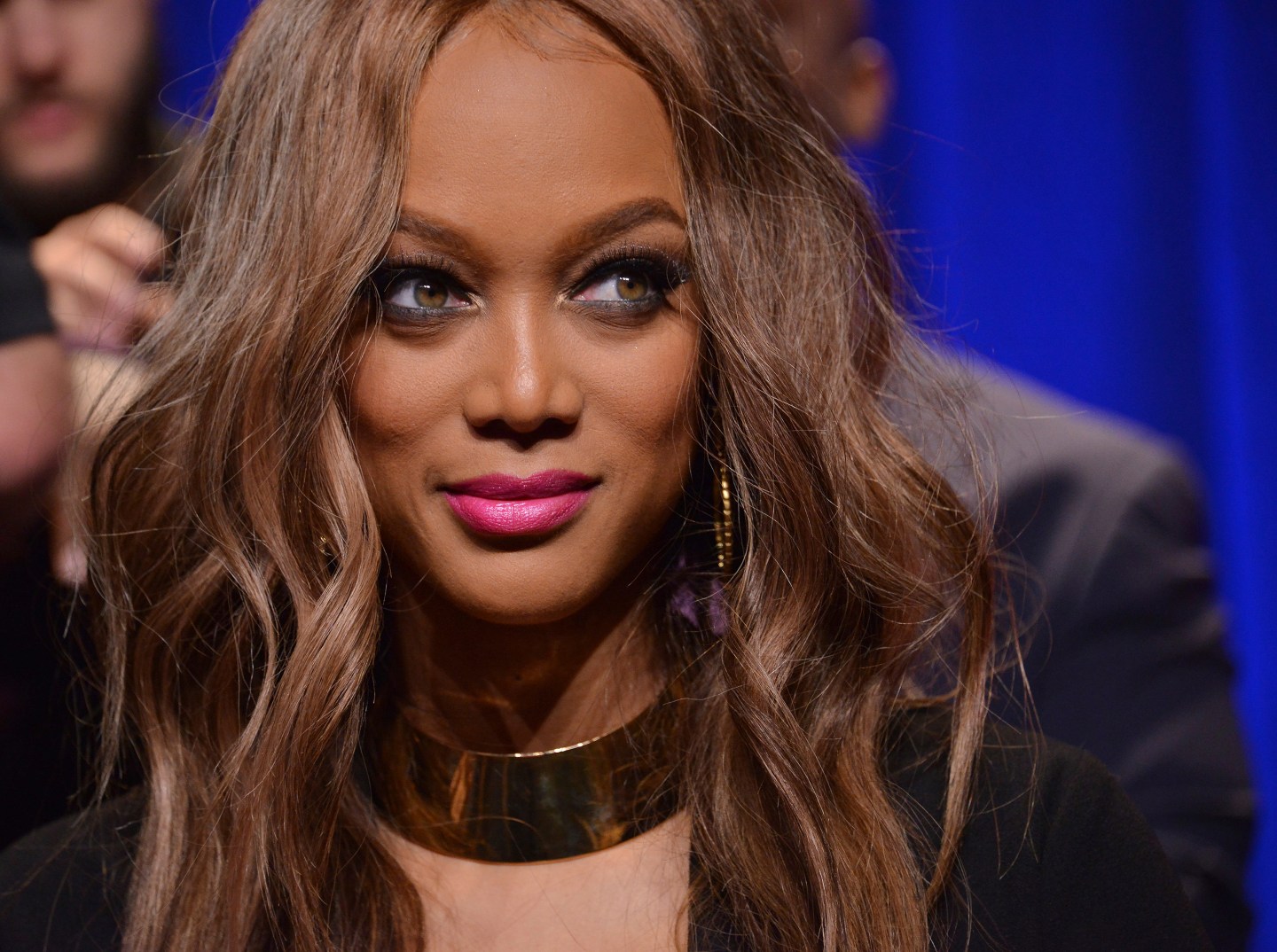 Tyra Banks has long played the role of wise teacher-on America’s Next Top Model and now as a “boardroom adviser” on NBC’s The New Celebrity Apprentice. But mentorship is also at the core of her businesses. And she’s just as eager to be a mentee.

When it comes to finding mentors, I hear you’re a big fan of the cold call.
Tyra Banks: Yeah, I have no shame in it. I may have fear in my belly, but I just push past those nerves. Years ago, I read Delivering Happiness, by [Zappos CEO] Tony Hsieh. I was struck by how he saw company culture, and I knew I wanted to build a business like that one day. So I picked up the phone and dialed his number. He didn’t believe it was me! Over time we developed a friendship, then a mentorship. I’ve learned so much from Tony. Especially the HR nuts and bolts.

Richard Branson is also a mentor of yours. How did you meet him?
I dressed as him for Halloween! My makeup artist transformed me without any prosthetics. I put pictures out on social media, and then I got a wonderful call from Richard. He said I was the most beautiful he’d ever looked. From there, my team connected with his, and he later invited me to do a Google Hangout with him. He wanted to talk about failure—my failures, his failures. I decided then to just put him on the spot and ask him to mentor me. I was nervous, but I figured, I like everything this man stands for. I can learn a lot from him. Let me just go for it. So I asked him to mentor me, in front of thousands of people. He kind of hemmed and hawed, “Ah, I have a wonderful team of people, Tyra. They can totally be there for you!” And I was like, “That team meaning you, right?” I just kept pushing him. I also pay it forward by mentoring people myself.

What is your mentoring style?
I’m constantly teaching and enriching my team because I want them to learn and grow and move up in the company. Either that, or I want them to move out but always have a positive outlook on what they learned during their time with me. You know, something one of my Harvard professors said was “Feedback on the run is better than none.” I used to feel like you had to have this, like, formal meeting in order to give or receive feedback. But sometimes you just don’t have time. Especially if you’re a startup, or you’re busy, or you’re going through a raise, or a sale, or mergers and acquisitions, or just drama, whatever it is. If you’re running to the bathroom and they’re in the hallway, there is nothing wrong with giving them 30 seconds of feedback. Just make sure it has a positive spin so it doesn’t sound crazy.

Related: You Can Now ‘Smize’ Via Text With New Tyra Banks Emojis

What is a question entrepreneurs don’t ask their mentors enough?
To be hard as hell on me. To hurt my feelings. To be so blunt that I might cry myself to sleep at night. But then I get up the next morning and I’m ready to attack my problem.

You’ve said that your mom, Carolyn London-Johnson, whom you have worked with, is one of your greatest mentors. Were you ever nervous to mix family with business?
No, not at all. My mom was a life raft for me. I was going through so many difficulties in the modeling industry, I begged her to quit her job [as a photographer] and work with me. At the same time, we had tons of conflict because we were still mother and daughter. She would get angry at me when I wouldn’t pick up the phone, call my modeling agency and tell them that I was dissatisfied; I wanted her to do it. Or we’d argue because she’d say, “OK, I’ll call for you,” the phone would start ringing, then she’d throw the phone at me and run out of the room. As an 18-year-old, I thought she was scared to talk to them. Now at 43, I know she was pushing me out of the nest and making me strong enough to stand up for myself. So a lot of our arguments were about her empowering me.

You’ve admitted to being a “bad delegator” in the first seven seasons of America’s Next Top Model. How did you ultimately identify that as a weakness and how did you fix it?
I was burned out and exhausted and eventually realized that I had to rely on people who knew what they were doing. It took me a long time to figure that out. I am not a leader who is just an overseer; I feel extremely connected to things. It’s not hands-on, it’s body-on. But I’ve learned to focus on my core competencies, hire people who are better at some things than I am and trust those people. That said, when I am adamant about something, those people should respect that and get behind it. When I hire a team, I want to be wrong 70 percent of the time. I want to be in a meeting and say something and they either say something better or make it better. Seventy percent of the time I say, “Yeah, let’s go with that!” But 30 percent of the time I say, “No, let’s not go with that; I need you guys to get behind this.” That 70-30 rule has a lot to do with delegation and trust.

You’ve talked a lot about the importance of pivoting. Looking back at your various ventures, was there ever a time that you wish you had stuck something out?
I can’t think of ones I left that I wish I’d continued, but I almost walked away from Top Model about 10 years ago. My attorney sat me down and said, “What are you doing? You created this global phenomenon and you’re just going to walk away? Have you lost your mind?” He did an intervention and stopped what would have been one of the biggest mistakes of my life.

Why did you want to leave?
I had started a talk show, and I felt like I was going out of my mind with stress.

With Tyra Beauty, you’ve said it was important to you to create a brand that wasn’t a licensing deal but a true self-funded startup. Why did you choose a multi-level marketing model?
We call it “social selling,” and I chose it for a number of reasons. For many years, I’ve been telling people, particularly women, to be their own boss. Be the CEO of your life. Take control! Have self-esteem, have self-worth, all of these things. When I first decided to start a cosmetics company, I was just going to put product on a shelf. Then one of my mentors explained to me about social selling and how close it was to my messaging of empowerment. I also thought about my mother and her struggles. She was unhappily married to my dad, but she stayed because her self-esteem was low and she didn’t have any financial outlets. I’m on tour now for Tyra Beauty. I’ve gone to Denver, Phoenix, Houston, Portland. I’m spending time with my “beautytainers” [members of Tyra Beauty’s sales team] and their families. You hear so many stories. One of my beautytainers had never seen the ocean, and this allowed her to put her feet in the sand for the first time. For most of them, Tyra Beauty is a side hustle. Extra side money means you can have a more interesting weekend. Or instead of a Honda Civic, you have a Honda Accord. By no means am I saying, “Get rich quick!” That’s not what it’s about. Tyra Beauty is not so much life-changing as it is a life enhancement.

Any tips for handling press exposure as a business leader?
Think about what you’re going to say before you say it. Your mic is always hot.

If you could start one business not tied to fashion or beauty, what would it be?
I’m obsessed with hospitality. Obsessed! Hotels, experiences — that will be my next side hustle. I met a friend at Harvard who got his undergraduate degree in hospitality from Cornell. We really want to open up a very experiential type of hotel, something out of the ordinary. Because, you know, that’s what I like to do—things that are kind of different.

The eyes have it

The simple way to impress Tyra Banks (or anyone else in a rush).
Eyes are big with Tyra. Any Next Top Model fan can recite her “smize” tip (smile with the eyes!). But her focus goes far beyond making good photos. “If someone is asking me for modeling advice, startup advice, business advice, entertainment advice,” she says, “and I answer them but I see their eyes glaze over because I’m not giving them the answer they wanted, I know not to invest any more time in that person. When you see them go, ‘Uh-huh, yeah, oh, uh-huh,’ I’m like, Uh, OK! Moving on.”

This isn’t just a Tyra thing. This is an established body language thing. The eyes can convey many messages, and quickly impress (or turn off) a future mentor or partner. There’s a formula to it: “Maintaining eye contact for roughly 60 percent of a conversation comes across as interested, friendly and trustworthy,” explains Travis Bradberry, president of TalentSmart, which provides emotional intelligence tests and training for businesses, and coauthor of the best-selling book Emotional Intelligence 2.0. Too much eye contact can be perceived as “aggressive and creepy,” he says, while too little can signal boredom or embarrassment. And be mindful of the rest of your face, he says: Fake smiles are obvious (because real ones crinkle), furrowed brows denote stress or discomfort, and unblinking stares might signal that you’re lying — or just scare people off. So get rid of the sunglasses! And practice your smize.