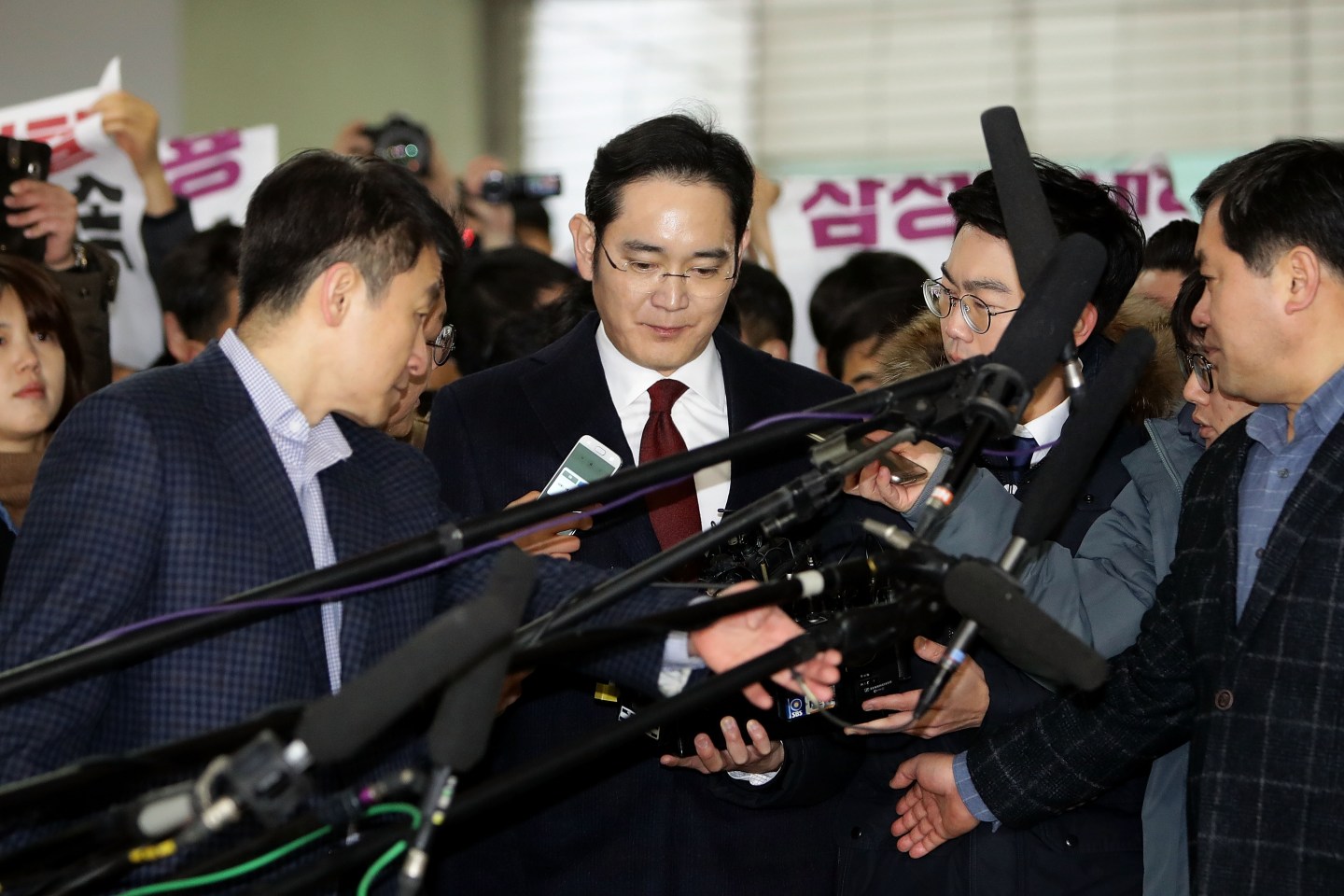 Special South Korean prosecutors questioned the head of top conglomerate Samsung Group on suspicion of bribery on Thursday in an influence-peddling scandal that led to President Park Geun-hye’s impeachment.

Park remains in office but has been stripped of her powers while the Constitutional Court decides whether to uphold the December impeachment and make her the first democratically elected leader to be forced from office.

“I am very sorry to the South Korean people for not showing a better side,” Samsung Group leader Jay Y. Lee told reporters as he arrived at the prosecution office in a black sedan, greeted by protesters holding signs calling for his arrest and accusing him of being the president’s accomplice.

Choi is accused of colluding with Park to pressure big businesses, including the Samsung Group, to contribute to non-profit foundations backing the president’s initiatives.

Choi, in detention and on trial on charges of abuse of power and attempted fraud, has denied wrongdoing.

Prosecutors named Lee a suspect on Wednesday and are investigating whether Samsung gave 30 billion won ($25.28 million) to a business and foundations backed by Choi in exchange for the national pension fund’s support for a 2015 merger of Samsung C&T and Cheil Industries.

Lee in December denied accusations the conglomerate sought to curry favor with Park or Choi to secure the 2015 merger, a deal seen as critical for ensuring family control of the conglomerate as generational succession looms.

Proving improper dealings between Park, or Choi, and Samsung would be key for the prosecutors’ case, analysts said, noting their goal was to prove Park or her surrogates took bribes from corporations in exchange for favors.

The special prosecution spokesman said investigators were also looking into whether Lee lied during a December parliamentary hearing about Samsung‘s involvement in the scandal, as well as whether he could be charged with breach of trust or embezzlement.

The special prosecution has not begun investigations into any other conglomerates. Dozens of South Korean corporate groups made contributions to the two foundations, but Samsung‘s donations were the largest.

The scandal has triggered weekly rallies calling for Park to step down. She has apologized and said this month the pension fund’s support for the Samsung companies’ merger was in the national interest.

If Park were to leave office, a presidential election would be held within 60 days. Among the expected contenders is former U.N. Secretary-General Ban Ki-moon.

Lee took over as leader of the smartphones-to-pharmaceuticals conglomerate after his father, founding family patriarch Lee Kun-hee, had a heart attack in 2014.

Jay Y. Lee’s arrest or indictment would be a blow to Samsung and the family, which has been streamlining its business to ensure a stable transfer of control from the ailing Lee Kun-hee to his children.

While analysts and investors said management would be able to keep the various affiliates including Samsung Electronics in good shape, the conglomerate as a whole may be slower to commit to major investments or acquisitions should Jay Y. Lee be imprisoned.

Some also said Samsung and the Lee family may lose credibility among investors.

“A corruption scandal is the most embarrassing thing for a pension fund like us,” said Park Yoo-kyung, a Hong Kong-based director for Dutch pension fund APG Asset Management, which holds shares in Samsung Electronics.

“We have an obligation to invest in a clean company.”

Share prices of most Samsung companies have shown muted reaction to Lee’s implication in the scandal, however. Samsung Electronics (SSNLF) shares rose 1.4% to a record high 1.94 million won on Thursday and Samsung C&T shares gained 1.6%, compared with a 0.6% rise for the broader market.