Rex Tillerson Would Head to D.C. with $180 Million Retirement Package from Exxon 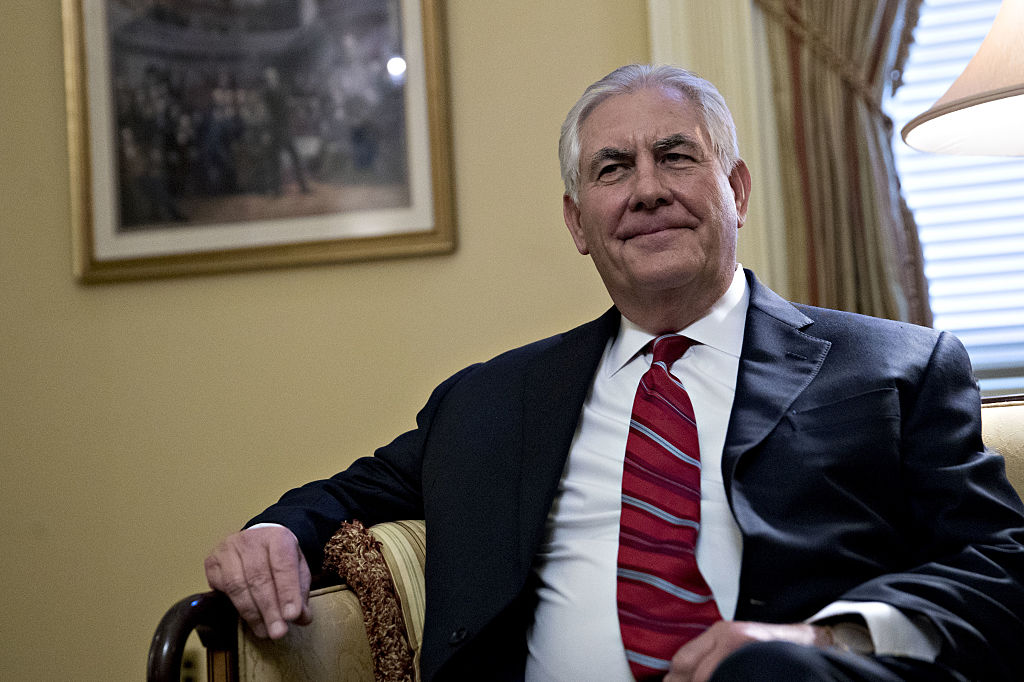 Rex Tillerson will get a $180 million retirement package from Exxon Mobil (XOM) if he is confirmed as President-elect Donald Trump’s secretary of state.

Tillerson will give up more than 2 million Exxon shares he would have received over the next 10 years. In exchange, the company will make a cash payment equal to the value of those shares to a trust to be overseen by a third party.

Exxon said Wednesday that Tillerson has already promised the State Department that he will sell another 611,000 shares he currently owns, worth about $55 million at Wednesday’s price, if confirmed. His Senate confirmation hearing begins next week.

Tillerson’s selection raised potential conflict-of-interest issues because Exxon has business interests around the globe, including Russia. Putting his retirement nest egg into a trust is intended to ease concerns that Tillerson could make decisions as secretary of state that would financially help himself or his former associates.

Federal ethics rules do not require government officials to sell off their investments but they must recuse themselves from matters that would affect those investments. Given Exxon’s global operations, ownership of Exxon stock could severely limit Tillerson’s actions as the nation’s chief diplomat.

Tillerson’s move comes as pressure mounts on Trump to make clear how he would separate himself from his company. Presidents are exempt from federal ethics rules, though most recent holders of the office have sold off their financial holdings and put them in trusts as if the rules did apply to them.

Trump has said he would hand management control of his business to his two adult sons, along with executives, but has given no indication he plans to sell his ownership interest in his company.

Tillerson has been CEO and chairman of the Irving, Texas, oil giant since 2006. Exxon spelled out the arrangement with Tillerson in a regulatory filing Wednesday with the Securities and Exchange Commission.

Edwin Williamson, a former State Department legal adviser who has reviewed the agreement, said that Tillerson agreed to put the cash he gets from Exxon in a trust that will invest only in Treasury securities and diversified mutual funds.

“They have eliminated anything that runs afoul of the conflicts-of-interest rule,” said Williamson, a lawyer at Sullivan & Cromwell in Washington.

Democratic Sens. Tammy Baldwin of Wisconsin and Elizabeth Warren of Massachusetts, however, called Tillerson’s payout egregious. Baldwin is proposing to ban corporate payments that are tied to an employee accepting a government job.

To avoid violating federal rules, business executives moving into top government jobs have often sold shares and created trusts as Tillerson is doing. This also gives them freedom to weigh in on policy without constantly consulting lawyers about the possible impact on their personal finances.

Henry Paulson, who was CEO of Goldman Sachs when President George W. Bush nominated him as Treasury secretary, sold about $500 million worth of Goldman stock. His predecessor, former Alcoa chairman Paul O’Neill, sold his stock and options after first saying he should have been be able to keep them.

Like presidents, vice presidents are exempt from federal ethics rules. After becoming vice president in 2001, Dick Cheney received payments and held stock options from his former oil-industry employer, Halliburton Co. The arrangement became a controversy because Halliburton was a major defense contractor.

Trump operates a sprawling global business with real estate holdings that aren’t as easily divested as stock. In addition to handing over control to his adult son, he has said he won’t make new deals while in the White House and will turn over his company to his adult sons and dissolve his charitable foundation.

Critics say that could leave Trump vulnerable to foreign governments that could try to influence him by rewarding or punishing his business interests in their countries. They say he should go much further and liquidate his assets and put the proceeds in a blind trust.

Because of the way Tillerson’s compensation is being dispensed, he will give up about $7 million compared with what he would have been paid if he retired in March as planned before Trump announced his cabinet nomination. Tillerson stepped down as CEO over the weekend.

Under the agreement, if Tillerson returns to the oil and gas industry within 10 years, the money in the trust will be paid out to a charity chosen by the controlling trustee.

Tillerson began his career at Exxon as a production engineer straight out of the University of Texas at Austin in 1975. He replaced longtime CEO Lee Raymond in 2006 and led the company during one of the most turbulent periods in its history, including its most profitable years but also the 2008 financial crisis and the slump in oil prices that began in mid-2014 that sharply cut into Exxon’s earnings.

Darren Woods, a 25-year Exxon veteran who had served as the company’s president, took over as CEO on Sunday.