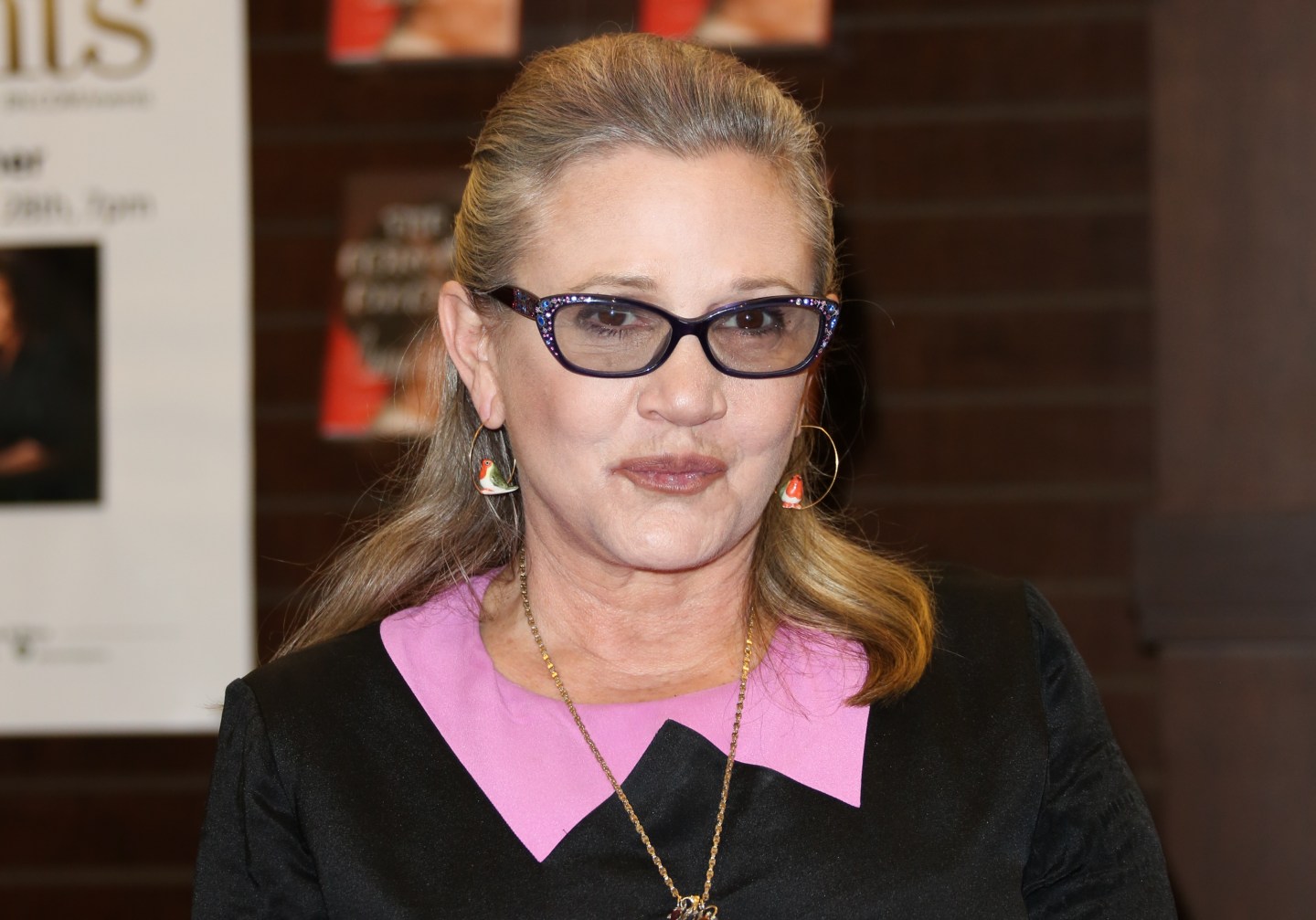 Carrie Fisher, who rose to fame as Princess Leia in the Star Wars films and later endured drug addiction and stormy romances with show business heavyweights, died on Tuesday aged 60, her daughter said through a family spokesman.

“It is with a very deep sadness that Billie Lourd confirms that her beloved mother Carrie Fisher passed away at 8:55 this morning,” Lourd said in a statement issued by Simon Halls. “She was loved by the world, and she will be missed profoundly.”

William Shatner, best known for his role in the television series Star Trek, said he would miss her. “A wonderful talent & light has been extinguished.”

Fisher, the daughter of actress Debbie Reynolds and singer Eddie Fisher, who died in 2010, had been in England shooting the third season of the British sitcom Catastrophe.

She suffered a heart attack during a flight on Friday from London to Los Angeles. She was met by paramedics and rushed to the Ronald Reagan UCLA Medical Center.

Her death came a month after the actress and author made headlines by disclosing that she had a three-month love affair with her Star Wars co-star Harrison Ford 40 years ago.

Fisher revealed the secret to People magazine while promoting her new memoir, The Princess Diarist, just before it went on sale. The book is based on Fisher’s diaries from her time working on the first Star Wars movie.

For more, read: Iconic Star Wars Actress Carrie Fisher Dies at 60: ‘She Was Loved by the World and She Will Be Missed Profoundly’

Fisher said the affair started and ended in 1976 during production on the blockbuster sci-fi adventure in which she first appeared as the intrepid Princess Leia. Ford played the maverick space pilot Han Solo.

“It was so intense,” Fisher told People. “It was Han and Leia during the week, and Carrie and Harrison during the weekend.” She was 19 and Ford was 33 at the time of the affair.

“How could you ask such a shining specimen of a man to be satisfied with the likes of me? I was so inexperienced, but I trusted something about him. He was kind,” she wrote of Ford in the memoir, the latest of several books Fisher authored over the years.

Fisher reprised the role in two Star Wars sequels. She gained sex symbol status in 1983’s Return of the Jedi when her Leia character wore a metallic gold bikini while enslaved by the diabolical Jabba the Hutt.

Filming was completed in July on Fisher’s next appearance as Leia in Star Wars: Episode VIII, which is set to reach theaters in December 2017.

Shortly after news of her death was made public, her dog Gary, who has his own Twitter account, said goodbye: “Saddest tweets to tweet. Mommy is gone. I love you @carrieffisher.”

Fisher also played a memorable supporting role in the 1989 hit film “When Harry Met Sally,” as a friend of Meg Ryan’s character who falls for and marries the best pal of Billy Crystal’s character.

Born in Beverly Hills, Carrie Fisher got her showbiz start at age 12 in her mother’s Las Vegas nightclub act. She made her film debut as a teenager in the 1975 comedy Shampoo, two years before her Star Wars breakthrough.

But her life was also mired at times in substance abuse, mental illness and tumultuous romances with other entertainment figures, all of which he laid bare in her books, interviews and a one-woman stage show titled Wishful Drinking.

She was once engaged to comic actor Dan Aykroyd, later married, then divorced, singer-songwriter Paul Simon, and had a daughter out of wedlock with Hollywood talent agent Brian Lourd.

After undergoing treatment in the mid-1980s for cocaine addition, she wrote the bestselling novel, Postcards from the Edge, about a drug-abusing actress forced to move back in with her mother. She later adapted the book into a film that starred Meryl Streep and Shirley MacLaine.

She admitted in a 2011 interview with Reuters that tabloid exposure of her private life could be trying.

“‘Carrie Fisher’s tragic life.’ That was one that hurt,” she said, quoting a headline. “‘Hey, how about Carrie Fisher? She used to be so hot. Now she looks like Elton John.’ That hurt.”

Fisher was promoting her campaign as a spokeswoman for the Jenny Craig weight-loss program at the time.

She also acknowledged being briefly hospitalized in 2013 due to a bout with bipolar disorder.

Summing up the showbiz legacy she expected to leave behind in her 2011 memoir Shockaholic, Fisher wrote in self-deprecating style:

What you’ll have of me after I journey to that great Death Star in the sky is an extremely accomplished daughter, a few books, and a picture of a stern-looking girl wearing some kind of metal bikini lounging on a giant drooling squid, behind a newscaster informing you of the passing of Princess Leia after a long battle with her head.