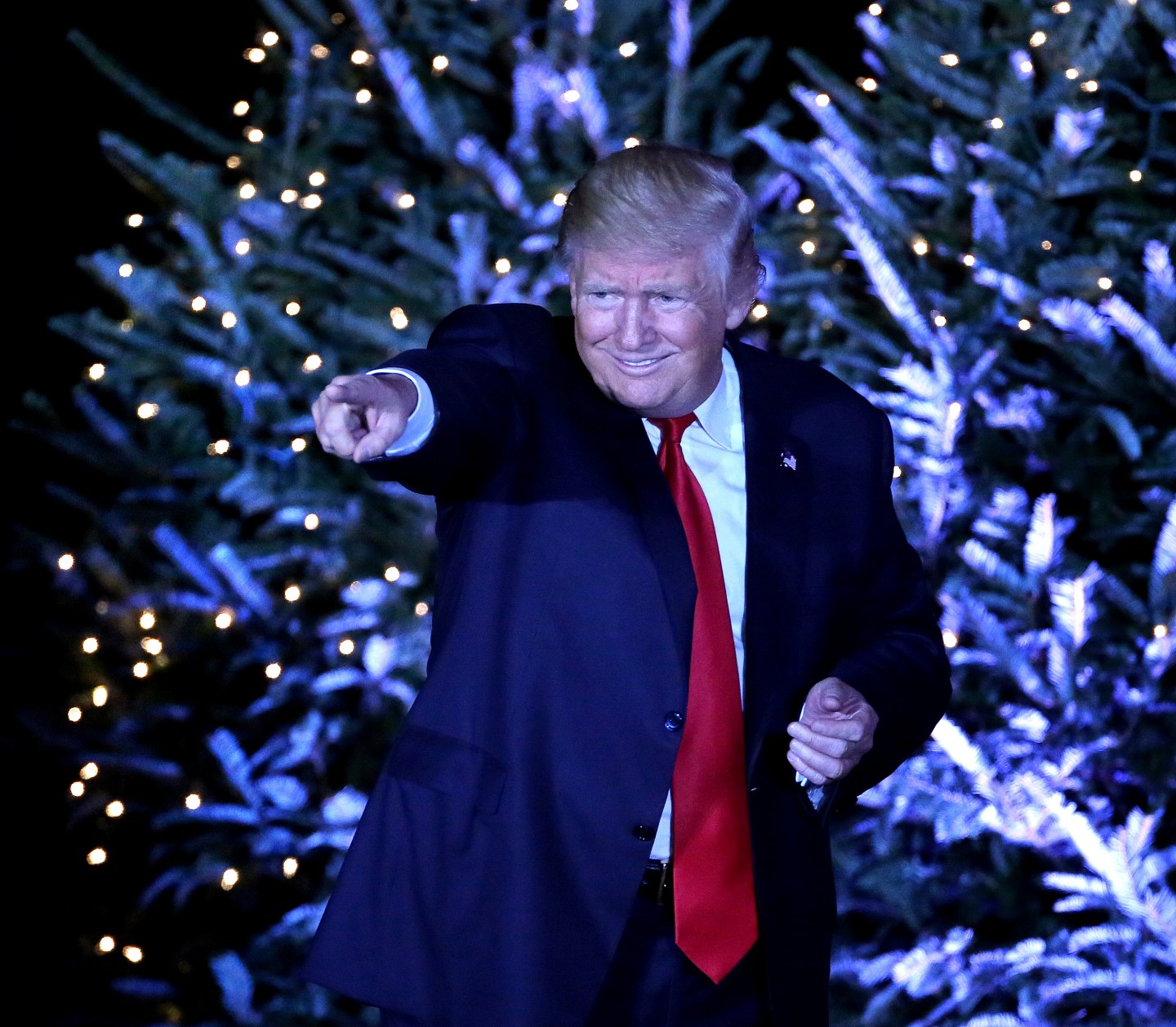 President-elect Donald Trump responds to cheering supporters, in front of a backdrop of Christmas trees, at a rally in Orlando, Fla., on Friday, Dec. 16, 2016. (Joe Burbank/Orlando Sentinel via AP)
Joe Burbank AP

President-elect Donald Trump on Saturday was wrapping up his postelection victory tour, showing few signs of turning the page from his blustery campaign to focus on uniting a divided nation a month before his inauguration.

At each stop, the Republican has gloatingly recapped his Election Night triumph, reignited some old political feuds while starting some new ones, and done little to quiet the hate-filled chants of “Lock her up!” directed at Democratic rival Hillary Clinton.

Trump planned the tour’s finale at the same football stadium in Mobile, Alabama, that hosted the biggest rally of his campaign. Also Saturday, he announced the nomination of South Carolina Rep. Mick Mulvaney to be his budget director, choosing a tea partyer and fiscal conservative with no experience assembling a government spending plan.

The raucous rallies, a hallmark of his campaign, are meant to salute supporters who lifted him to the presidency. But these appearances also have been his primary form of communication since the Nov. 8 election.

Trump has eschewed the traditional news conference held by a president-elect within days of winning. He’s done few interviews, announced his Cabinet picks via news release and continues to rely on Twitter to broadcast his thoughts and make public pronouncements.

China steals United States Navy research drone in international waters – rips it out of water and takes it to China in unprecedented act.

He later corrected the tweet. China said Saturday it intended to return the drone to the U.S.

Within days of beating Clinton, Trump suggested to aides that he resume his campaign-style barnstorming. Though he agreed to hold off until he assembled part of his Cabinet, Trump has repeatedly spoken of his fondness for being on the road. Aides are considering more rallies after he takes office, to help press his agenda with the public.

In Pennsylvania, he launched into a 20-minute recap of his Election Night win. The crowd cheered as the president-elect slowly ticked off his victories state by state. He mixed in rambling criticisms of pundits and politicians from both parties.

In Ohio, he took veiled swipes at fellow Republicans, including the state’s governor John Kasich and independent presidential candidate Evan McMullin, whom he solely refers to as “that guy.” McMullin competed chiefly in Utah.

Why Trump Is Tweeting About ‘Celebrity Apprentice,’ Not Russia

In Florida, Trump remembered his general election foe by joking, “We had fun fighting Hillary, didn’t we?” He said his supporters were “vicious, violent, screaming, ‘Where’s the wall? We want the wall!’

But Trump has also sounded some notes of unity on the tour. In North Carolina, he said, “We will heal our divisions and unify our country. When Americans are unified there is nothing we cannot do — nothing!”

After the Alabama rally, Trump planned to return to Mar-a-Lago, his Palm Beach estate. Aides said the president-elect probably would spend Christmas week there and could remain at the coastal resort until New Year’s.

The president-elect’s choice to head the Office of Management and Budget — a job requiring Senate confirmation — is a founder of the hard-right House Freedom Caucus. In a statement, Trump called him a “very high-energy leader with deep convictions for how to responsibly manage our nation’s finances and save our country from drowning in red ink.”

Mulvaney has taken a hard line on budget matters, routinely voting against increasing the government’s borrowing cap and pressing for major cuts to benefit programs as the path to balancing the budget.

Actually balancing the federal budget requires deeper spending cuts than the GOP-controlled Congress can probably deliver on, especially if Trump prevails on revenue-losing tax cuts and a big infrastructure package next year.