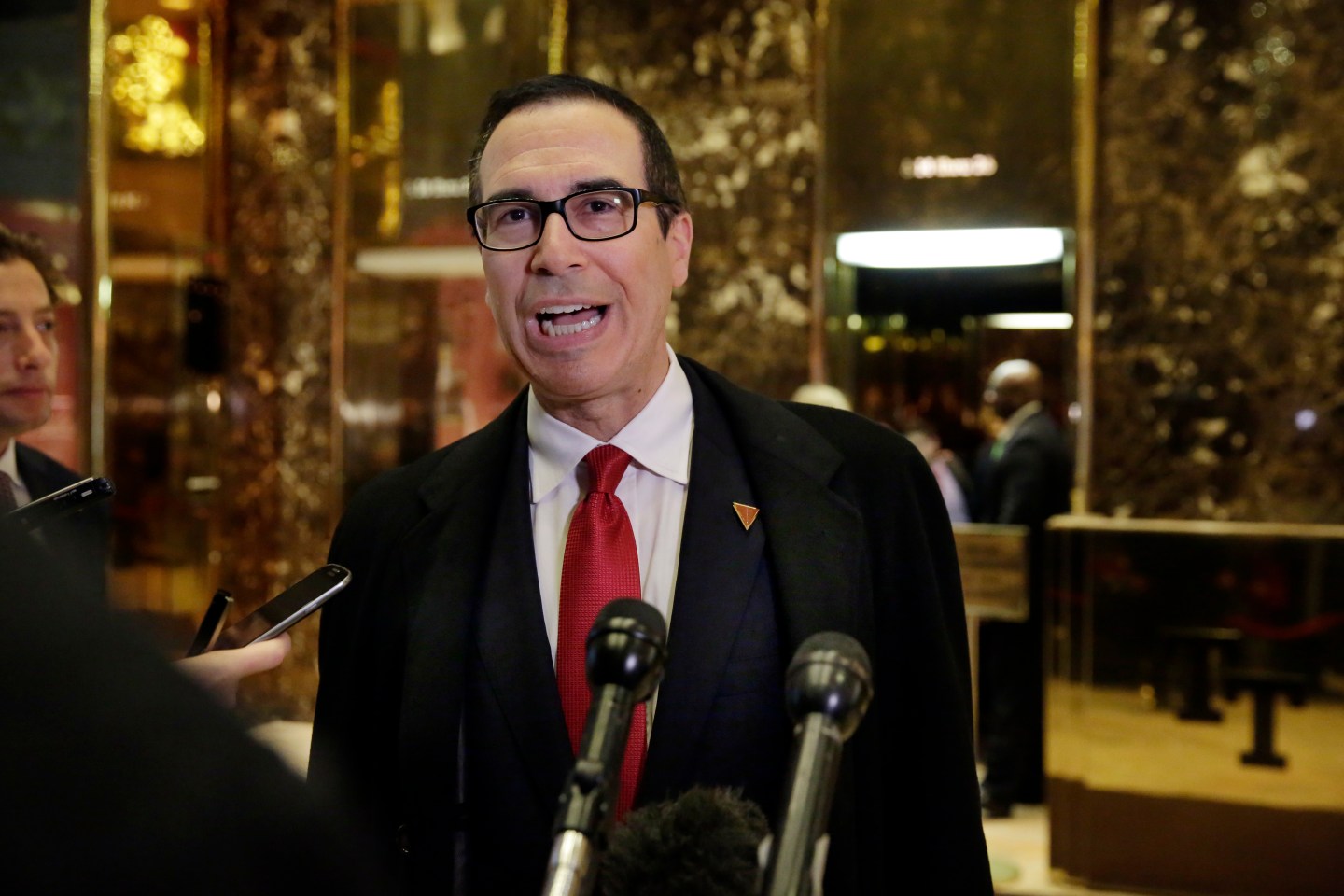 Democrats are eyeing the Senate confirmation hearings for Donald Trump’s Treasury secretary pick selection as a prime opportunity to chip away at the Republican’s populist appeal with working-class voters and begin rebuilding their own party’s economic message.

Given the narrow GOP majority in the Senate, Steven Mnuchin is likely to be confirmed. But Democrats plan to rough him up along the way, grilling the former Goldman Sachs executive over his Wall Street ties and his stake in a bank that profited from the foreclosure crisis. Several people who lost their homes are seeking to testify in the upcoming confirmation hearings.

Some Republicans are privately questioning Mnuchin’s readiness to face aggressive questioning by senators. He has no government background, and his media appearances immediately after being picked raised alarms about his political inexperience. Some of the president-elect’s advisers were caught off guard by the bold promises Mnuchin made to reporters following the official announcement, including pledging the largest tax cut since President Ronald Reagan in the 1980s and up to 4% economic growth.

As of Friday, Mnuchin, a multimillionaire, had not yet turned in vetting materials to the senators who will be initially weighing his nomination, including three years of tax returns and other financial information.

To some Democrats, Mnuchin is an even richer target than Trump’s State Department pick, Rex Tillerson, who forged close ties with Russia during his long career at Exxon Mobil. While Democrats are eager to question Trump’s own connections to Russia, their ability to discredit his populist appeal is more central to the party’s post-election rebuilding efforts.

“Is Mr. Mnuchin, a former long-time executive at Goldman Sachs, really going to re-establish Glass-Steagall and control Wall Street greed and illegal behavior? I doubt it,” Vermont Sen. Bernie Sanders said in a preview of some of the issues he and other Democrats plan to raise in the confirmation hearings.

Mnuchin’s connections to OneWest, a bank that foreclosed on thousands of homeowners after the housing crisis, are expected to be at the forefront of the hearings. He headed a group of investors who owned the bank, which foreclosed on more than 36,000 families in California alone — most in minority neighborhoods — according to the California Reinvestment Coalition.

Some of those former homeowners say they hope to attend the Senate hearings, with some telling The Associated Press they would like to testify about their firsthand experiences with bank practices they considered unfair. Senate Democrats have launched a new website inviting people to share their personal experiences with OneWest, and could use the submissions in the hearings.

Sen. Elizabeth Warren, D-Mass., compared Mnuchin to “someone out of a bad movie for what went wrong on Wall Street.”

Mnuchin is one of several wealthy individuals from the private sector tapped for jobs in the new Cabinet. He spent nearly two decades at Goldman Sachs before creating his own hedge fund and financing Hollywood movies. Mnuchin then served as Trump’s campaign finance chairman and is well-liked by the president-elect’s team.

Tom Korologos, one of Washington’s most experienced hands when it comes to confirmation hearings, said wealthy, politically inexperienced Cabinet nominees can find the “arcane art” of the confirmation process a challenge.

“They may not be used to taking criticism, answering uncomfortable questions. They may feel that since the president picked them, why should the Senate get to second-guess?” he said. “But that’s not how our system works. There is nothing like the confirmation process.”

Trump’s transition team began assigning “sherpas” — Washington lingo for the people who guide nominees through their meetings with lawmakers and help prep them for the hearings — to its picks around Thanksgiving. Mnuchin’s sherpa is Mary Waters, a congressional liaison for the Agriculture Department during George W. Bush’s administration.

Trump’s pool of potential sherpas has been limited by his decision to ban lobbyists from his transition team. Korologos, for example, has helped more than 300 people with confirmation hearings but couldn’t work with Trump because he is a registered lobbyist.

Mnuchin, 53, has met with some Republicans on the Senate Finance Committee, which will vet the Treasury nominee before likely recommending him for a vote before the full chamber. Democrats, including their ranking committee member Ron Wyden of Oregon, are expected to begin meetings with Mnuchin after reviewing his vetting documents.