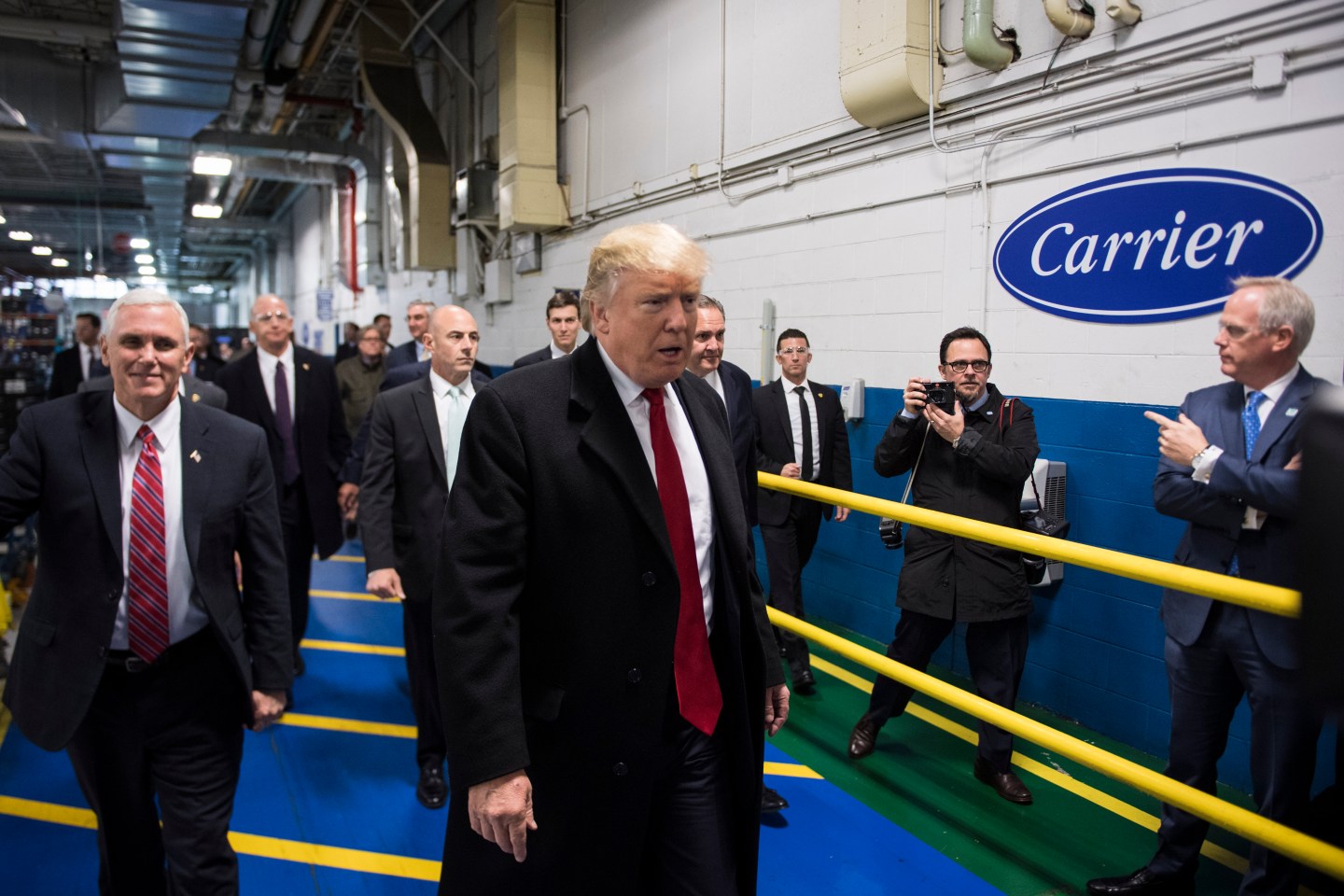 Let me start this post by saying I did not vote for Donald Trump and consider myself an independent. I have, to date, resisted opining on the election, as it appears to be a polarizing event and therefore a no-win for those who comment. However, I care deeply about the future of our country and the welfare of workers of all levels. Being in Venture Capital allows me to believe (perhaps naively) that I contribute to adding jobs to our country. All this brings me to the recent agreement reached between Trump and Carrier, as it may mark a shift in economic policy.

A key assumption in interpreting the value of the deal is how many jobs were already slated by Carrier to leave the country and which of these were saved. Trump has claimed he saved 1,150 jobs. Trump’s opponents say 350 were never slated to leave the country. I’m not going to try to figure out which camp is right. My analysis will only assume 800 manufacturing jobs that were slated to leave the country now will remain in Indiana. This does not seem to be disputed by anyone and was confirmed by a Carrier spokesperson. My observations for this analysis are:

Given what we know, here’s why I think Trump’s Carrier deal is a good one for the U.S., and actually results in revenue to the government that far exceeds the tax credits:

To make the total relatively conservative, I’ve omitted county taxes, payroll taxes and other payments that various other governmental entities might receive. This should mean the total financial income to various governmental entities from these jobs remaining probably exceeds those calculated in Table 1 below even if some of my rough assumptions are not exact.

Of course, there is also a multiplier effect of families having higher income available for spending. And if 800 additional people are unemployed, there are numerous costs paid by the government. We’ll leave these out of the analysis, but they are all real benefits to our society of more people being employed. It is important to realize how expensive it is for the government to subsidize unemployed workers as opposed to realizing multiple sources of tax revenues when these workers have good jobs.

So, the economic question of whether the subsidy Trump agreed to was worth it partly depends on how much additional income was derived by the government versus the tax credits of $700,000 per year granted to Carrier in exchange for keeping the jobs here.

If we take the total from Table 1, which we believe underestimates the income to governmental entities, and multiply it by the 800 workers, the annual benefit adds up to about $9.8 million. Since Carrier is getting a $700,000 annual subsidy, the governmental revenue derived is over 14 times the cost. And that is without including a number of other benefits, some of which we mentioned above. As an investor, I’d take a 14 times return every day of the year. Wouldn’t you? Shouldn’t the government?

This is not a sweetheart deal for Carrier. I won’t go into all the math, but it indicates that Carrier will spend tens of millions of dollars more by keeping workers in the U.S. rather than moving them to Mexico. Comments that the $700,000 yearly benefit they have been given is a sweetheart deal does not appear to be the case.

Trump campaigned on the promise that he would create policies and heavily negotiate to increase employment in America. While this is a small victory in the scheme of things and certainly falls short of retaining all the jobs Carrier wanted to move, the analysis demonstrates that spending some money in tax breaks to increase employment has a large payback to government. It also means a lot to 800 people who greatly prefer being paid for working rather than receiving unemployment benefits.

The other question is whether this is scalable as a way of keeping jobs in America. Clearly Trump would not be able to negotiate individually with every company planning on moving jobs out of the U.S. Some infrastructure would need to be created – the question would be at what cost? If this became policy, would it encourage more companies to consider moving jobs as a way of attracting tax benefits? Any approach would need to prevent that. My guess is that getting a few companies known to be moving jobs to reconsider is only an interim step. If Trump is to fulfill his promise, an ongoing solution will be needed. But it is important to properly evaluate any steps from an impartial financial viewpoint as the United States needs to increase employment.

Mike Kwatinetz is a founding general partner at Azure Capital Partners and a Venture Capitalist investing in application software (SaaS), ecommerce, consumer web and infrastructure technology companies. Neither he or the firm are investors of Carrier.