Watching the NBA in Virtual Reality Is Surprisingly Good 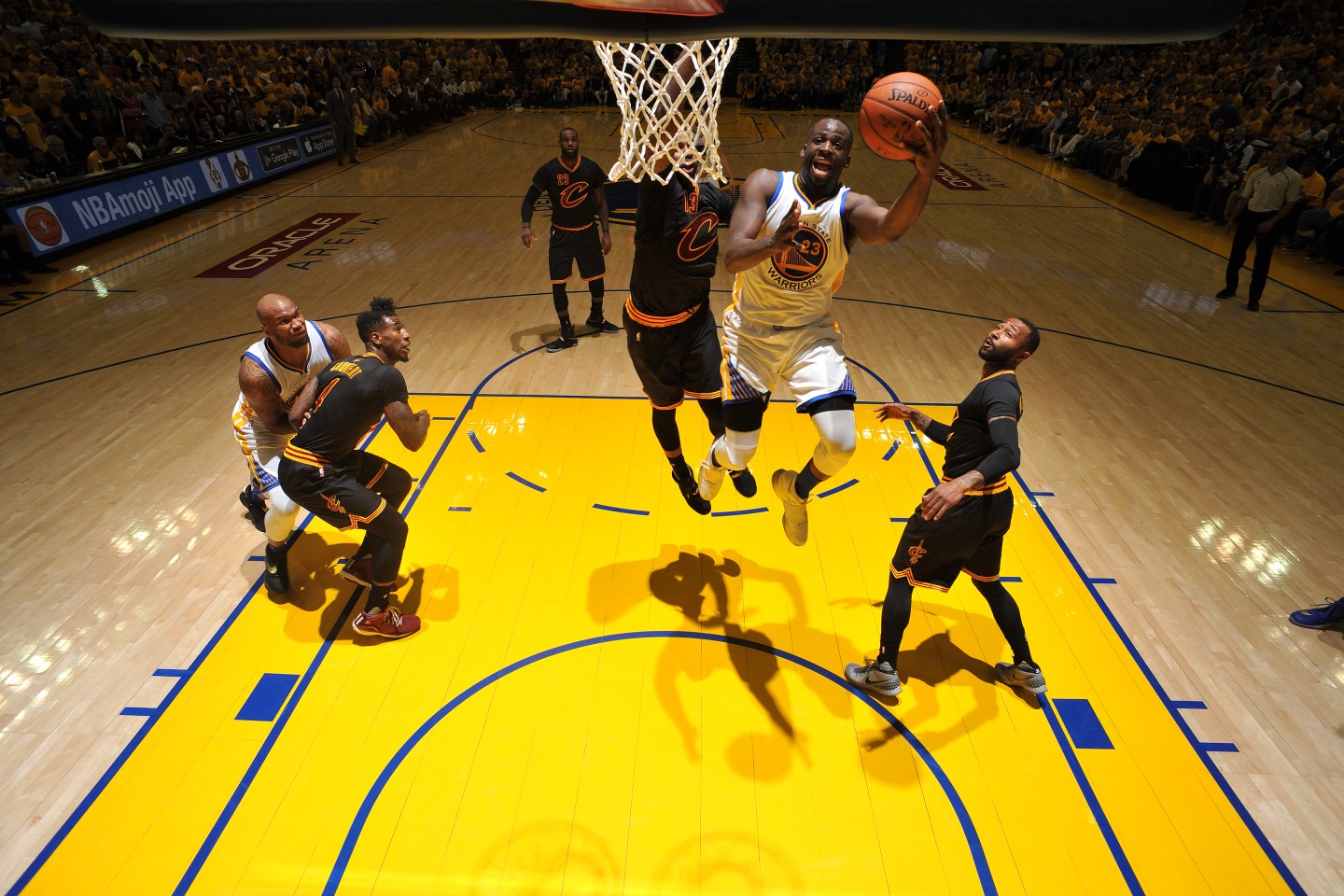 OAKLAND, CA - JUNE 19: Draymond Green #23 of the Golden State Warriors goes for the layup during the game against the Cleveland Cavaliers during the 2016 NBA Finals on June 19, 2016 at Oracle Arena in Oakland, California. NOTE TO USER: User expressly acknowledges and agrees that, by downloading and or using this photograph, user is consenting to the terms and conditions of Getty Images License Agreement. Mandatory Copyright Notice: Copyright 2016 NBAE (Photo by Garrett Ellwood/NBAE via Getty Images)
Garrett Ellwood — NBAE/Getty Images

Carmelo, get your backside out of my face.

That’s all I could think to myself one recent November evening, while watching a New York Knicks-Portland Trailblazers game. I wasn’t sitting in a posh courtside seat at Madison Square Garden, with Anthony’s derriere obstructing my view—though I may as well have been. No, I was watching this game on a Samsung Gear VR virtual reality headset. The camera angle put me right at courtside, near the official scorer’s table—where Anthony was standing, waiting to check into the game at the next whistle. Which couldn’t come soon enough.

For the first time, an American pro sports league is broadcasting a regularly-scheduled series of live games in virtual reality throughout a season. The NBA is showing one VR game per week, usually on Tuesday nights, in partnership with NextVR, a company that broadcasts live events in virtual reality. To access the games, consumers need a Samsung VR headset, which costs $99.99, a compatible Samsung phone, and the NextVR app. (NextVR says its broadcasts will soon be available on other VR platforms like Daydream and Playstation). Fans also must subscribe to NBA League Pass, which costs $199—a pretty penny for one VR game a week, but the package allows you to watch nearly every NBA game on your television, computer or mobile device. NextVR games are subject to blackout restrictions: for example, if you live in the New Orleans market or the Bay Area, you won’t be able to watch the Dec. 13 Warriors-Pelicans matchup in VR.

The latest VR headsets are incredible technological feats, but so far there’s precious little content specifically made for the embryonic platform. Some companies, like NextVR, are hoping that digitally placing fans in the best seats in the house at a pro sports game will help sell headsets and software, and attract advertisers to boot. So watching pro sports in VR could be the next big thing.

But we heard the same tune about 3D TV about six or seven years ago, and that fad has come and passed. Sports fans are habitual creatures. Give them a team to pull for, some fantasy players to track, a cold beer and nice HD reception, and most are content. The live sports viewing experience doesn’t need a desperate makeover. So why would fans be compelled to potentially buy a new phone and futuristic headgear and drop almost $200 bucks for a TV subscription, all for the privilege of seeing Carmelo Anthony’s ass?

VR stakeholders insist their innovation delivers more than 3D did. “We’re used to watching sports on that rectangle on the wall,” says Brad Allen, executive chairman of NextVR, which was founded in 2009 as a 3D company. “3D TV added some depth. But you’re still watching that rectangle on a wall.” Says David Cole, NextVR’s co-founder and CEO: “When we’re doing our job right, you forget you’re in VR. You become less distractible. It’s a new consumptive state.”

How the NBA Wants to Own Virtual Reality

Cole’s not just cheerleading. I found myself way too invested in an early regular season game between two middling teams, though it was an entertaining show: New York’s 7’3″ phenom/freak-of-nature Kristaps Porzingis dropped 31 points in a 107-103 New York win. The headset tunes out external stimulation: the broadcast really places you courtside, providing close-up views of the players, refs, and fans. Porzingis’ drive down the lane, and punishing left-handed finish, is much more vivid in VR. At one point, I thought Knicks center Kyle O’Quinn was going to fall on me.

From the camera behind a basket, you can see a whole offensive play develop in front of you. It’s catnip for hoops nerds, and explains why some sports teams are turning to VR for training their players. The NextVR broadcast has its own announcers, who share directional commands you don’t typically hear on ESPN: look to your right to see a player set a screen, to your left to see a fight for a loose ball.

The big problem with the VR presentation, at this point, is the resolution. Players can appear blurry, which puts strain on your eyes, and your patience, over the course of an NBA game. NextVR promises the pixilation will improve, and to be fair, Samsung’s headsets are on the lower end of today’s consumer VR tech.

Neither the NBA nor NextVR are saying how many fans are watching the VR games. The numbers are surely modest at the outset. Either way, VR won’t go mainstream right away. But based on my experience, it has a future on the court.