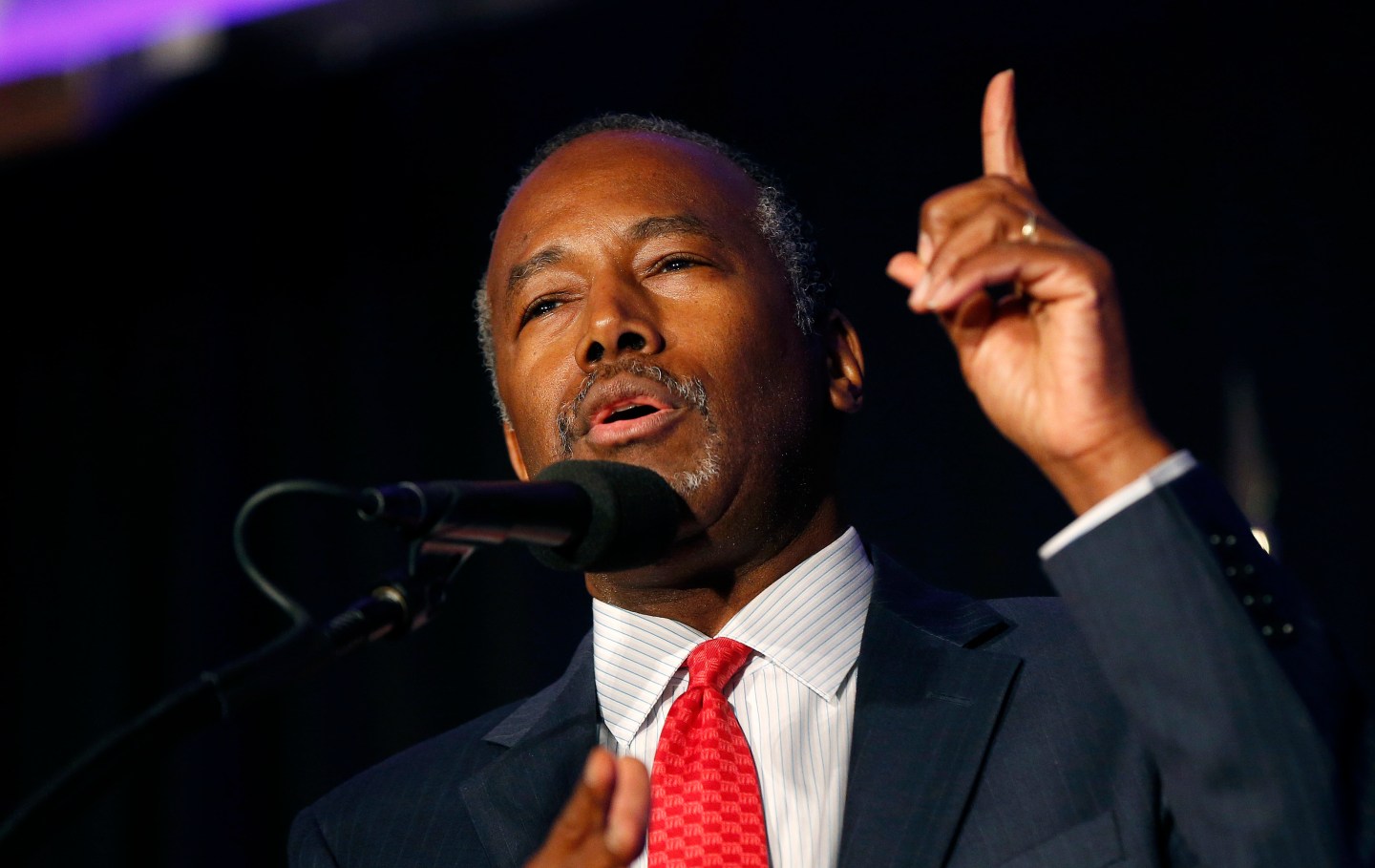 Trump’s decision, announced early Monday by his transition office, comes as the real estate mogul continues a series of interviews, meetings with aides and other deliberations aimed at forming his administration.

In a statement, Trump says he’s “thrilled to nominate” Carson, saying he “has a brilliant mind and is passionate about strengthening communities and families within those communities.”

Carson has been coy about joining the new administration, saying shortly after Trump’s election victory that he wasn’t certain he’d fit into a Cabinet-style role. The discussion at that time centered on speculation that Carson might be selected to head the sprawling Department of Health and Human Services.

Trump’s statement Monday says, “Ben shares my optimism about the future of our country and is part of ensuring that this is a presidency representing all Americans.”

Carson was among the 16 Republican candidates who challenged Trump for the Republican nomination. He was a favorite of religious conservatives and a strong fundraiser, but his team burned through money quickly and he failed to win any of the early primary contests.

Trump treated Carson harshly during the primary, saying he had a “pathological temper.” Still, Carson quickly endorsed Trump after he dropped out of the contest.

As a Trump supporter, Carson was both loyal and critical. He conceded that Trump had “major defects” and said at one point that he would have preferred a scenario other than Trump winning the Republican primary.

Last week, Trump announced that he planned to nominate former Goldman Sachs executive Steven Mnuchin as his Treasury secretary and billionaire investor Wilbur Ross to lead the Commerce Department. He chose Betsy DeVos to be secretary of education and Elaine Chao, the wife of Senate Republican Leader Mitch McConnell, to be transportation secretary. Trump also has turned to retired Marine Gen. James Mattis to be secretary of defense.

A retired neurosurgeon, Carson has often recounted his childhood as the son of a single mother in inner-city Detroit in his books and motivational speeches. In his 1996 autobiography Gifted Hands, Carson wrote of the humiliation he felt using food stamps from his mom to pay for bread and milk, and said how he began to excel at school only after receiving a free pair of glasses that allowed him to see the lessons written on chalk boards.

Carson has not said whether his family ever lived in federally-funded housing or received Section 8 subsidies to help pay rent. But as a political figure he has criticized such public assistance programs for creating “dependency” on the government among low-income minorities.

“I’m interested in getting rid of dependency, and I want us to find a way to allow people to excel in our society, and as more and more people hear that message, they will recognize who is truly on their side and who is trying to keep them suppressed and cultivate their votes,” Carson said in a speech at the Conservative Political Action Conference in 2015.

With the help of financial aid and scholarships, Carson attended Yale University and the University of Michigan Medical School before being the first African-American named as the head of pediatric neurosurgery at Johns Hopkins Children’s Center in Baltimore. There he garnered national acclaim for directing the first surgery to separate twins connected at the back of the head.

Carson’s rise to political prominence began with a 2013 speech at the National Prayer Breakfast, where he gave a withering critique of the modern welfare state and the nation’s overall direction while President Barack Obama was seated just feet away. During the 2016 Republican presidential primary, Carson’s inspirational life story, Christian faith and anti-establishment message briefly catapulted him last year ahead of Trump and other rivals in opinion polls.

But his success on the campaign trail quickly crumbled amid questions about whether elements of his rags-to-riches autobiography were exaggerated or fabricated—including a purported childhood fit of rage in which he tried to stab his best friend in the belly only to be foiled by a belt buckle. Carson’s business dealings also faced scrutiny, including his ties to a wealthy Pittsburgh dentist whom he helped avoid prison time for felony health care fraud.

The Associated Press first reported last year that Carson invested millions of dollars in real estate deals with Alfonso A. Costa, whose dentistry license was revoked following a felony conviction. According to required financial disclosure forms he filed in 2015, Carson his wife made between $200,000 and $2 million a year from those real estate investments. Costa also served on the board of Carson’s charity, the Carson Scholars Fund, which provides college scholarships to children in need.